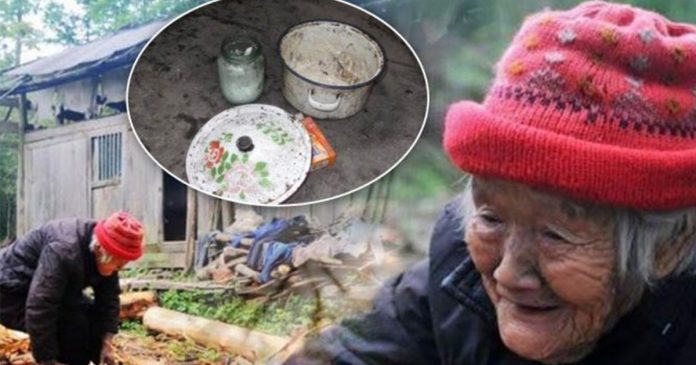 This 92-year-old woman lives on the mountain in an old house all by herself. Even though she is said to have five children, this old woman lives alone and does everything from collecting fire woods and cooking meals in her frail condition.

It is definitely heartbreaking to see this old woman living alone in a remote area.

How could this old woman live alone without no one to take care of her? 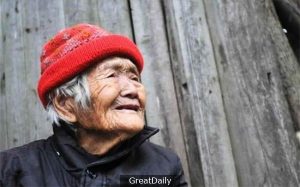 Moreover, the house she currently lives in is in a terrible condition. The wooden house barely has sturdy walls and all of the windows do not have curtains. 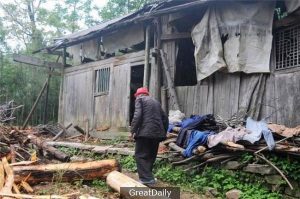 Once, a journalist discovered her residence and interviewed her. When asked what the logs around her yard were for, the old woman replied casually: “I am an old woman. I am already 92 years old. Right now, I am making my own coffin. I collect the logs from the woods at the mountain.”

After shifting several logs, the old woman then sat near the entrance door and told the journalist her story. She revealed that she actually has three sons and two daughters who are probably in their 50s and 60s. 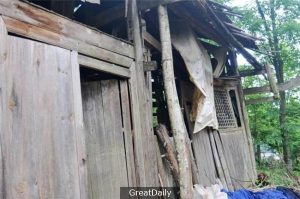 When the journalist wanted to step inside her house, the old woman immediately waived him off and said: “Don’t. Don’t step inside. My house is no longer sturdy as it used to before. It is old.”

However, after some persuasion, the old woman allowed the journalist to come in and walked inside the house 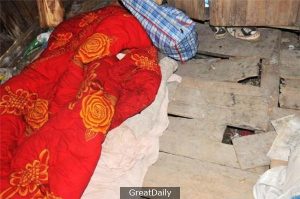 As soon as the journalist stepped inside the house, he realised how old and time-worn the house was. Every corner of the house was damaged. The sight of decaying woods was everywhere.

Apparently, the house managed to stay erect on the ground due to several stacked bamboo piles which have been made to support the old house’s structure 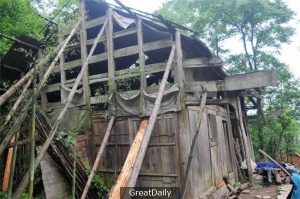 The old woman also revealed that there were some kind-hearted people who came to visit her a few days before and gave her some money.

This is her bed, the old and tattered wooden floor covered with a red comforter and piles of clothes which she bundles up to be used as her pillow 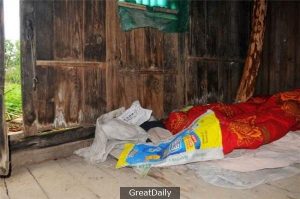 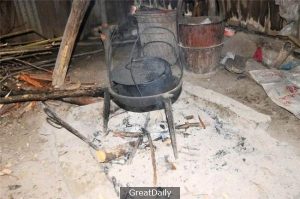 The rice pot is actually terribly dirty and old.

However, she has no choice but to cook her rice in the pot 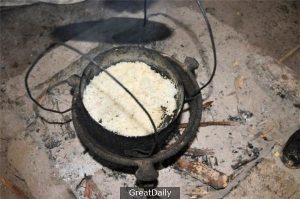 Despite her tough life, this old woman still manages to crack a smile 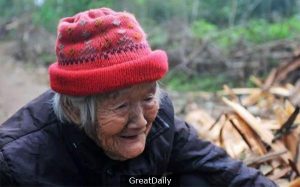 Even though the rice has gone cold, the old woman never waste any single grain of rice 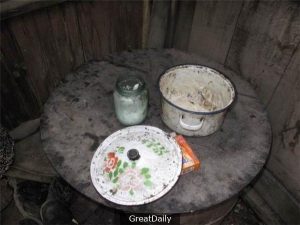 When asked about all of her five children, she told that her eldest son works at a coal mine, her second son followed his wife and lives with his father in law. However, she does not know her third son’s whereabouts.

Meanwhile, her two daughters have long been married and live with their respective family 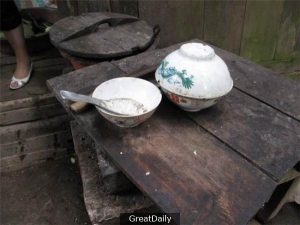 It was disheartening to listen to her story. It was not like the old woman did not have any living children or relatives. Instead, her children chose to ignore her well-being. Sadly, the old woman said that she has come to terms with her unfortunate fate.

Now, she welcomes anyone who is willing to pay her a visit at her old house. 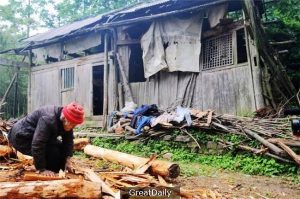 Anyone who has at least an ounce of sympathy would feel sad upon seeing how she continues to live her lonely life in the old house.

Her last wish remains to not cause trouble to her children or to anyone else when she died. Thus, she builds her own coffin as if she knew that she would leave the world anytime soon.

Filipino cop wins hearts when he treated a homeless lady and...