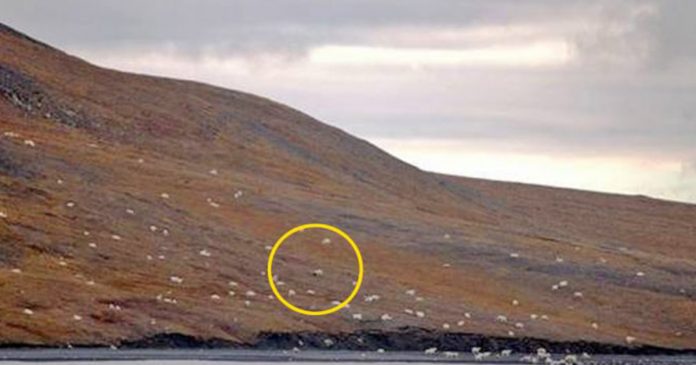 Tourists on a cruise ship recently had an unforgettable moment as they witnessed an incredible rare nature moment in one of the most isolated places in the world. 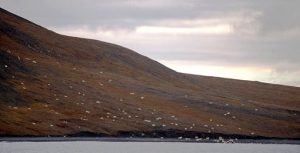 At first from the ship, they thought they were seeing a herd of sheep moving along the hillside.

But, as they got closer to the animals, they realised that it was a very different kind of animal!

The white dots they saw were actually hundreds of polar bears gathering together on the Arctic coastline to feast on a dead beached whale. The incident happened on a hillside on Wrangel Island in the North Arctic Ocean of northeastern Siberia. 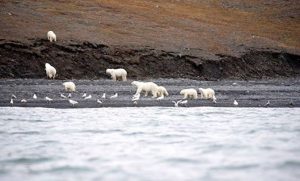 “There were at least 230 polar bears, including single males, single females, mothers with cubs and even two mothers with four cubs each,” a spokesperson for the Wrangel Island Nature Preserve said

It is estimated that only 25,000 polar bears are currently living in the wild which means that the tourists on the cruise ship managed to see about one percent of the entire population of wild polar bears in just one place.

The rare sight is definitely a pleasing one to see hundreds of polar bears get a healthy feeding.

Since global warming has been causing the melting of ice in the Arctic, wild polar bears have a tougher time to hunt for food as they get stranded from food supplies and starve to death like in the recent viral photo showing dying polar bear digging out trash can for food in Somerset Island 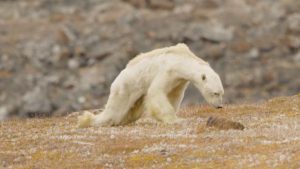 Scientists predict that all polar bears will go extinct from the wild by 2100 if there is no intervention done to slow down global warming, according to researchers at Polar Bears International.

At least, these polar bears would not have to worry about food for a while and the lucky tourists got a priceless memory from the cruise tour. If you would like to find out more on how you can help contributing to their conservation and preservation, visit Polar Bears International.