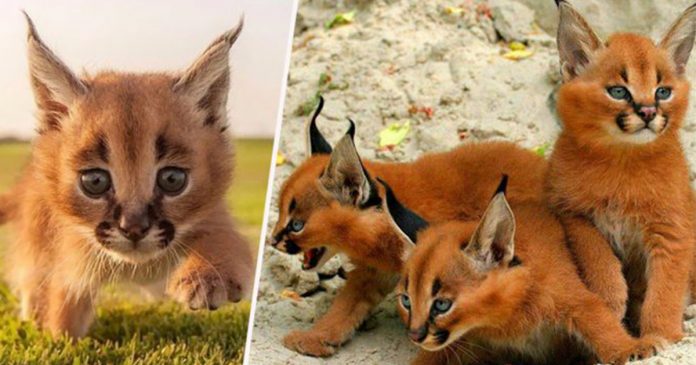 Stop what you’re doing this instantly and look at this extremely adorable species of cats! here are pictures of cute and fluffy baby caracal cats.

These stunning cats were well known in ancient Egypt as there is proof they were regarded as sacred animals during the time of the Pharaohs. They appear to have been religiously significant as there have been evidence found today of painting s of these cats as well as bronze figures sculpted in the image of caracal cats in the ancient Egyptian culture. There has also been discoveries of embalmed caracals which were believed to have been guarding the tombs of Pharaohs.

The caracal cat is a medium-sized wild cat and they are native to Africa, the Middle East, Central Asia as well as India. Adult caracals can weigh up to 18 kilograms and they can run up to speeds of 50 miles an hour. Although the adult caracals are beautiful to behold, they younglings are just adorable.

Caracal cats can be reared at home as pets as they are easy to tame and domesticate. With this being said, not all countries allow people to have these animals as pets. For the majority of us who cannot keep these cuties as pets, here are some photos of baby caracals:

Hope this brightened your day and put a smile on your face!