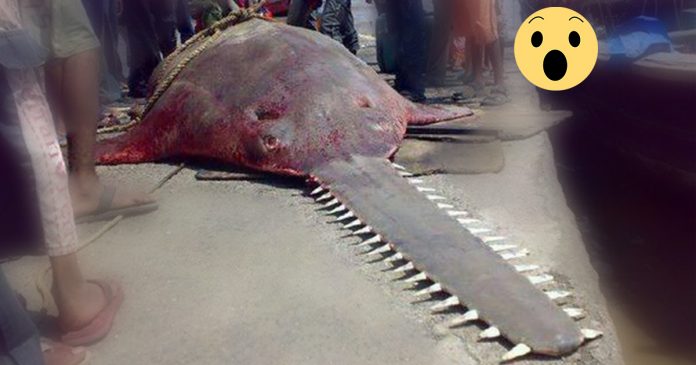 This legendary monster is known as saw fish. They can grow up to 7 meters and occupies tropical and subtropical waters of the world. This fish can usually be seen at harbours, estuaries and sometimes upstream of a river.

Thanks to their huge size, they can easily be spotted in the water.

Saw fish is a big fish with a long, flat body and its saw is extended from its head and looks more like a sword with sharp, strong teeth on both sides 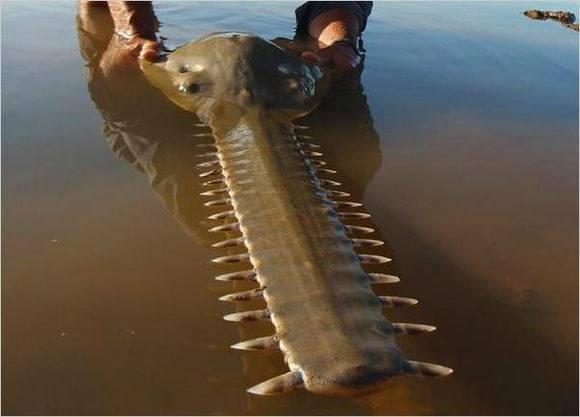 A saw fish uses its saw to hunt and catch other fishes as well as to protect itself from enemies. 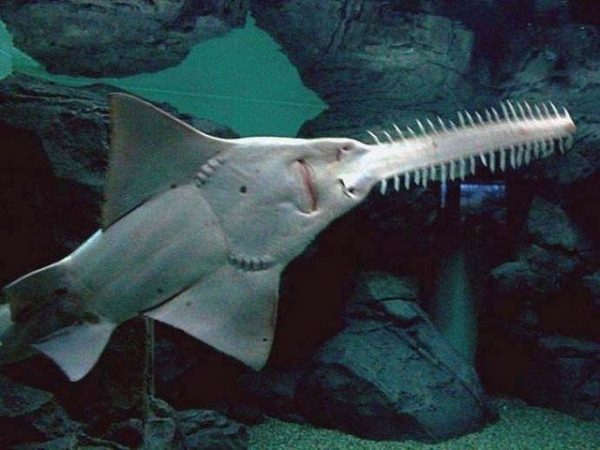 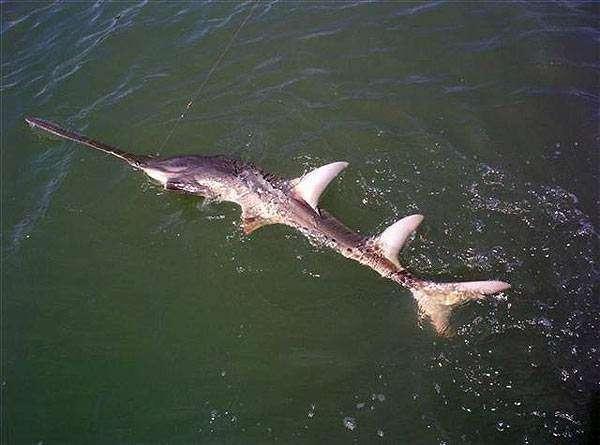 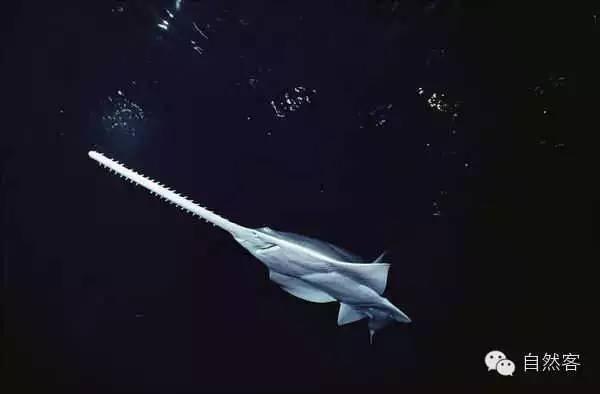 Legendary weapon made out of a saw fish’s saw 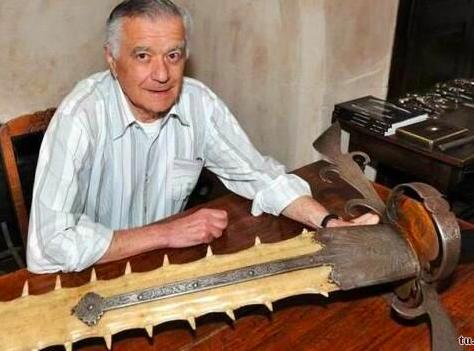 Even though their famous saw protects them, it also becomes one of the reasons of their increasingly declining population. 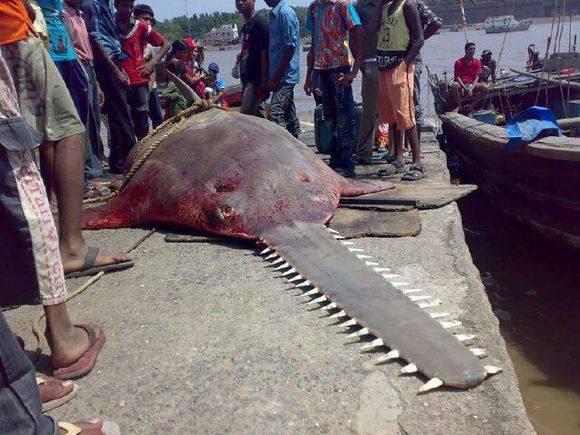 Because of their long saw, fishermen could easily catch them as their saw could easily be tangled in fishing nets.

Often when it gets entangled with the nets, it will be impossible for them to flee 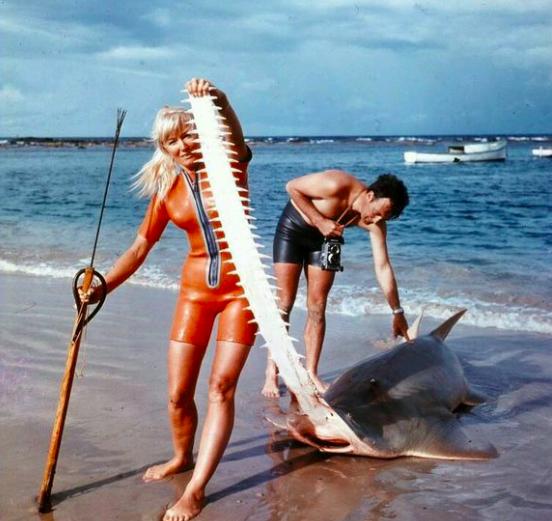 According to legend, there was an invincible ‘sea monster’ that ruled the sea with a sharp saw

In fact, this is the only legend that has been passed down by sailors for centuries. The so-called ‘sea monster’ is actually a saw fish. It is a relative of shark species.

The earliest fossil of a saw fish was first found to be dated back in the Cretaceous period. 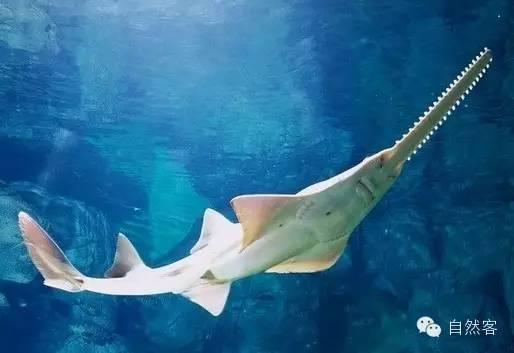 Saw fish mainly occupies tropical and subtropical coastal areas and in major estuaries. They often can be found in the shallow sea, resting in the sand sediment on the bottom of the sea. They would sometimes swim up to river and could be seen in a considerable distance away from the sea. 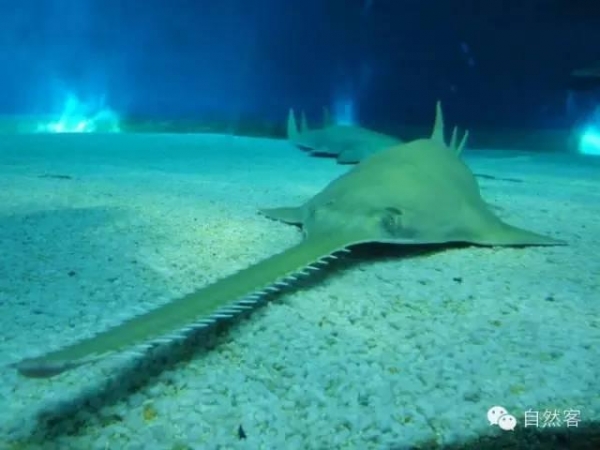 In the past, saw fish is considered to be mild-looking, slow-moving underwater foragers.

Digging the bottom of the sea for food, feeding on small fishes, crustaceans or other invertebrates 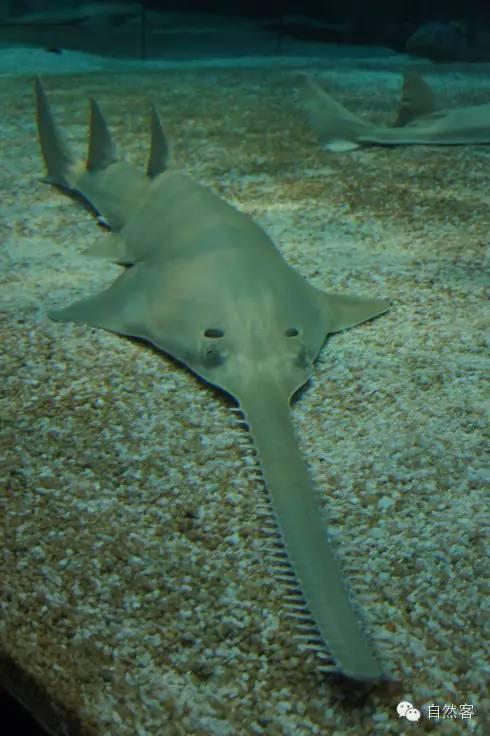 Furthermore, their saw is sword shaped and accounts for 1/3 of their body length.

On both sides of the sword edges are hard, sharp teeth that are use for their daily hunting, exploring the sea bed, digging out creatures and to hack and slash fishes for food 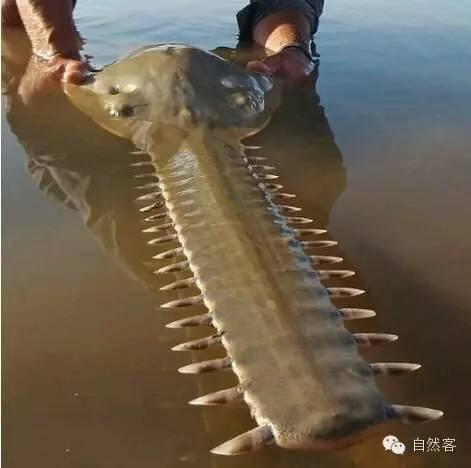 A saw fish’s large saw is their most trusted weapon

It could slash a few times in a second.

Their offspring are vulnerable to attacks by other carnivorous fish 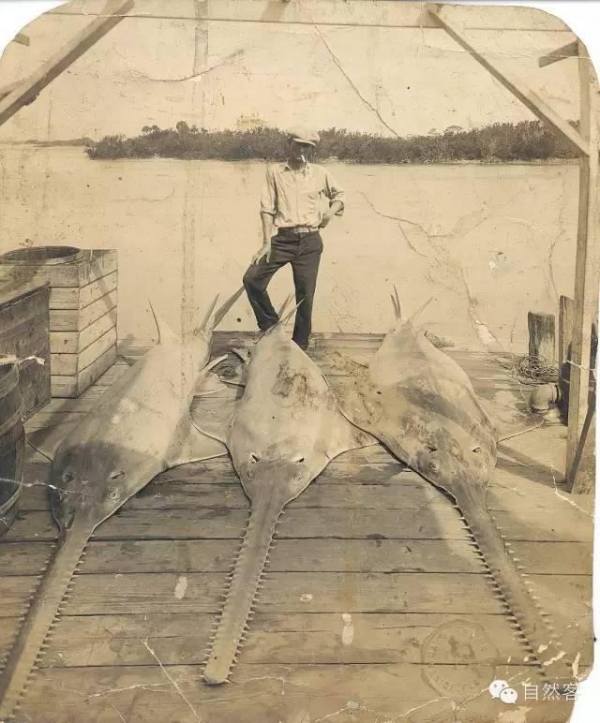 Saw fish do not mate.

They are parthenogenesis fish which means that they reproduce asexually 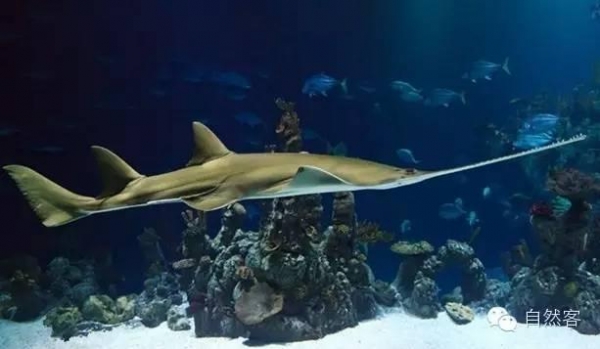 Parthenogenesis is also known as a sexual reproduction and it is common in invertebrates like saw fish. It means the new offspring are reproduced from normal eggs without fertilisation.

Similarly, parthenogenesis can also be observed in the breeding of surviving samples occurred in artificial captive environments such as the Komodo dragon (earth’s largest lizard) where this reptile fertilise their eggs through parthenogenesis method, producing small Komodo dragons as a result.

Did you find saw fish an interesting species? Sadly, their population is declining rapidly as humans kill them for their saw. It is about time they get protection from illegal hunting. If not, they will go extinct in no time and our future generations may never get a chance to get to know this incredibly species.