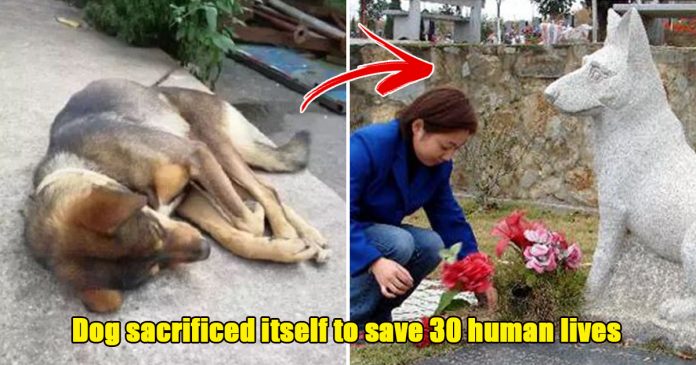 On the eve of the Chinese Qingming festival, a monument of a dog was erected at Hejiashan Cemetery in Jiujiang City in 2006. Every year, many people would come to the dog’s grave to offer bouquets of flowers and food as offerings. 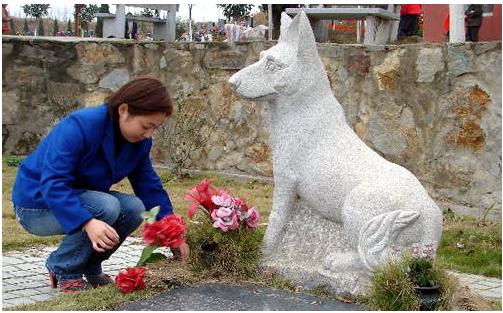 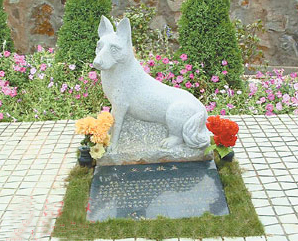 What did this dog do to deserve such respect? If I tell you this female dog who had just given birth to a litter of 4 puppies sacrificed its life to save the lives of more than 30 people, will this touch you?

28 September 2003, Liu bought a dead dog from the market and brought it back to a driving school where he worked. The canteen operator then cooked a pot of dog meat stew, in preparation for that night’s dinner for more than 30 employees. When the cook was stewing the meat, the fragrant smell had attracted four puppies and they ran into the canteen. 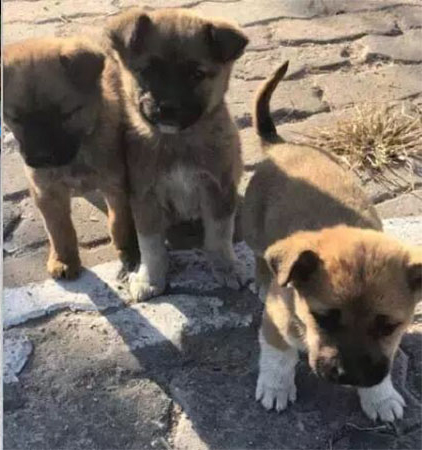 Suddenly their mother ‘Sai-Hu’ rushed in and pushed the meat away with her paw. Sai-Hu barked at its puppies angrily and chased them out of the canteen.

Sai-Hu barked at the meat on the floor for few minutes but the employees in the canteen did not care about its barks. When Sai-Hu saw that they were about to consume the dog meat, it became restless and walked around the meat in circles while growling at the meat, then it looked at the pot of dog meat stew and started to bark at it too.

The employees thought that it might want more meat so they threw few more pieces on the ground. But Sai-Hu just pressed the meat with her paws. It did not consume the meat. It continued to bark at the meat continuously. Finally, everyone got tired of the Sai-Hu’s behavior.

More and more people started to walk into the canteen and were waiting for the dog meat to be fully cooked. Sai-Hu kept barking ferociously at the pot of stew. It’s barks grew even more ferocious as it saw more people coming into the canteen. Looking at the people who just ignored its barks, Sai-Hu gave out a loud, long chilling and sad whine. Upon hearing its mother’s whine the four puppies rushed into the canteen again. 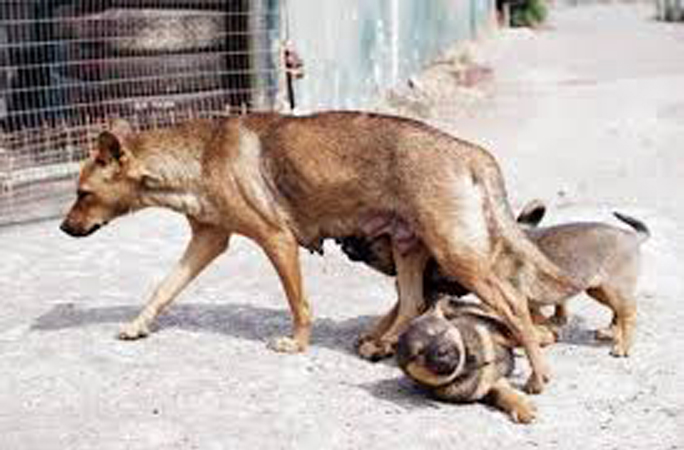 Finally, Sai-Hu gave out a long and sad whine before eating pieces of dog meat on the ground. After consuming the meat, no longer than 10 minutes Sai-Hu started to thresh violently on the ground, twitching and then blood started to ooze out from its seven apertures. Sai-Hu was dead apparently!

After witnessing the event, the employees who were waiting to consume the dog meat stew were alarmed! The pot of meat stew was actually laced with poison!

After this incident, the pot of meat stew was sent to the Health and Epidemic Prevention Department for testing and it turned out that the pot of stew was laced with ‘tetramine’ a component used to poison rodents and the poison in the stew was strong enough to kill a full grown cow! Because of Sai-Hu’s brave and loyal act more than 30 lives were saved.

“Last time I used to listen to stories about loyal dogs saving their owners or people and thought that they were just legends. But after witnessing this event that happened to me, I now believe loyal dogs do save their owners when they are in peril.” 3 years had passed and Liu still have mixed feelings about the loyal Sai-Hu that passed away.

“I bought the dog meat and if anything were to happen, I would be the person responsible for all these deaths. It was Sai-Hu that saved everyone,” said Liu 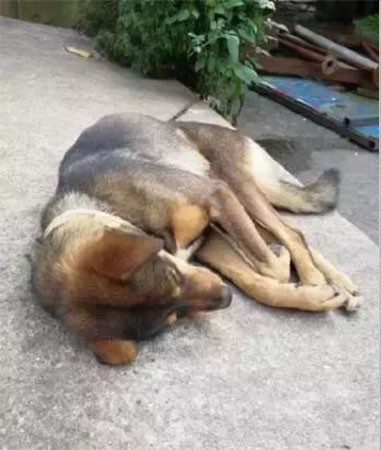 “If it were not for Sai-Hu that took the poisoned meat and prevented us from consuming it, the consequences would be unthinkable!” Liu recalled the incident that happened at Lin Ye driving academy, Jiujiang City.

After Sai-hu’s death, it’s owners Fu Wenqi and his wife were very sad. Tearfully they buried their beloved Sai-Hu in their vegetable garden. Zhang NingKang, the general manager of He Jieshan Cemetery in Jiujiang City, heard of Sai-Hu’s feat and was very touched. He met up with Fu Wenqi and said that he would like to move Sai-hu’s grave to He Jiashan cemetery.

Fu Wenqi and his wife were surprised: “We are very grateful to you for encouraging us to relocate Sai-Hu. But your cemetery, isn’t it used to bury humans? Why do you want to bury a dog there?”

Zhang NingKang replied: “All living beings on earth will die eventually. What is left behind is the spirit. Isn’t Sai-Hu’s spirit in saving people enough to garner the admiration of everyone?”

After that, Zhang NingKang spent more than 10,000 Yuan to employ a specialist to find Sai-Hu a suitable spot for her grave at the cemetery. They made her a coffin and carved a stone tablet for it. Zhang Ning Kang employed 4 workers and rented two cars to move Sai-Hu’s grave. 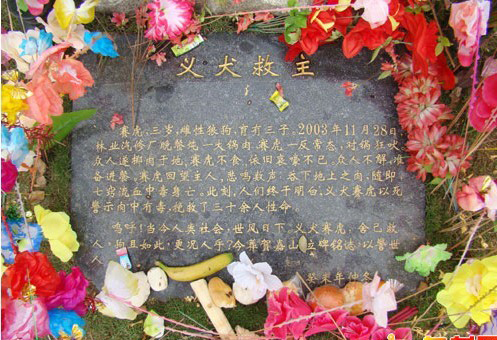 All living beings are like us humans living on earth with their own methods and ways. We should sympathize with them, have compassion for them, treat them with care and equality and if you understand how to treat animals kindly and fairly, you are a person with a lot of virtues and blessings.

If you like this heroic story of Sai-Hu, why not let your friends on Facebook know about it as well by sharing it out? Thank you.