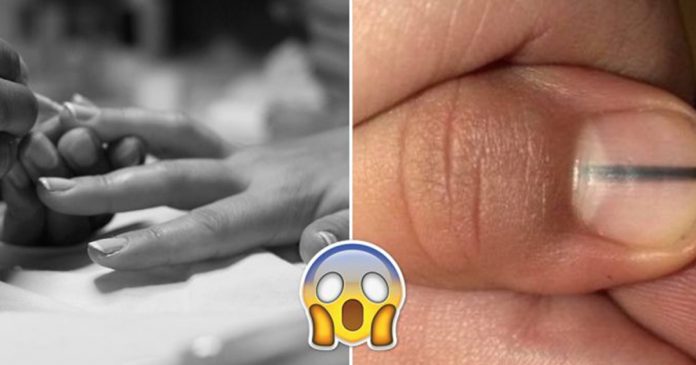 When a woman walked into a nail salon and asked the nail technician to cover up a strange black mark on her nail, the technician immediately knew something was wrong. Days later, she found out that the woman had a serious health issue.

One day, Lisa Harrison Williams, a nail technician, had a walk-in client who made a special request: to use a dark color to cover up a “straight dark vertical stripe down her nail.”

In a post on her Facebook page, Williams shared that the client had gone to many other nail salons where the staff “diagnosed” her “a few different ways”

However, Williams knew something was wrong

“I did not want to frighten her but I told her she needed to see her doctor immediately!” Williams recalled.

The client took Williams’s advice, and on Aug. 14, the woman called Williams to tell her that she had been diagnosed with cancer, and “it was a very aggressive melanoma that has already spread to her lymph nodes.” Williams then added that the woman’s prognosis was not good.

The NHS website describes similar abnormalities of the fingernail:

Dark stripes running down the nails (linear melanonychia) are fairly common in black people over 20 years of age, and in most cases it’s perfectly normal

However, dark stripes shouldn’t be ignored because it can sometimes be a form of skin cancer that affects the nail bed, called subungual melanoma. It’s important that your doctor checks it to rule out melanoma.

It will also cause the stripe to change in appearance—for example, it may become wider or darker over time and the pigmentation may also affect the surrounding skin (the nail fold)

By sharing this woman’s experience, Williams urges everyone to pay attention to abnormalities on their nail beds.

Odd changes in your nails can very likely be nothing to worry about! But sometimes it is an indication of a very serious disease. And please keep an eye on the nail beds—toes and fingers—of your elderly loved ones and your loved ones that aren’t physically able to notice changes in the nail beds! Early diagnosis can make all the difference in the world!!!

28-year-old man thought that his fever and headache were not serious,...