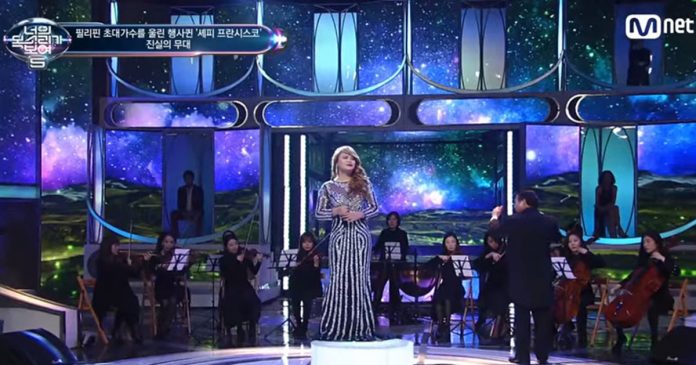 Recently, there are more and more Filipinos receive praises and acknowledgement from around the globe for their astonishing talent in singing. Well, it may not be entirely surprising for Filipinos as they well-known for their love in singing with karaoke being a common sight in nearly every part in the country.

Nevertheless, there is another reason to be proud being a Filipino!

Recently, another Filipino singer has delivered a jaw-dropping performance at Korean’s music game show in which he sang in two entirely different voices!

In the very first episode of Mnet’s 5th season ‘I Can See Your Voice’, Sephy Francisco, an incredibly talented transgender from The Philippines has shocked many by singing a song that is meant to be sung in duet, ‘The Prayer’ which is originally sang by Celine Dion and Andrea Bocelli.

‘I Can See Your Voice’ is a mystery music game show in which the celebrity guest has to guess whether a contestant is a skilled singer or a tone-deaf based on clues about the contestants that are given through a series. Unfortunately, Sephy’s clues did not convince the celebrity guests, South Korean famous boy group, Block B.

As Sephy stood on the stage for the moment of truth, the entire studio was shocked when they heard Sephy’s choice of song which is a very hard song to be sung even for an experienced singer. However, their shock did not end there.

As soon as Sephy began to sing, their jaws instantly dropped in amazement to his soprano voice!

Not to mention when he began to sing Celine Dion’s part! The audience were shrieking in disbelief to him easily changing his voice to accommodate the high-pitch Celine’s part!