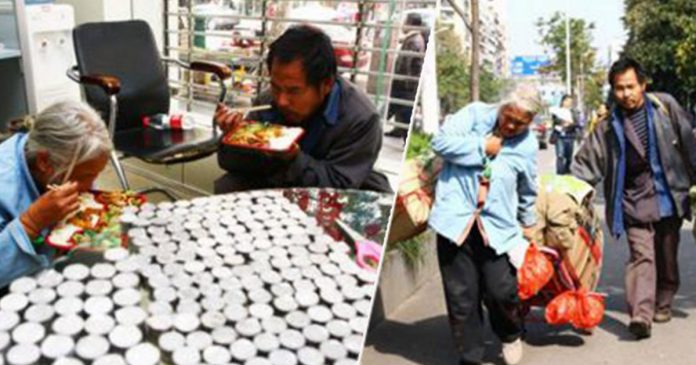 Parents will always want to try and give their children a good life. Even though they suffer through hardship and poverty, they will try their level best to make sure their children will grow up to have better opportunities by sending them to school in order to receive a good education.

In China’s Anhui Province, there was a heartbreaking story that surfaced recently. In order to pay for their son’s education abroad, a father named Gao Guang Lin who is blind, begged along the streets with his wife.

When they had received a large amount of coins from passerby’s who took pity on them, the couple went to the bank to exchange the coins. Unexpectedly, they were shooed out of the building because the staff thought they were looking to cause trouble and rejected their application.

Gao Guang Lin who id 49-years old is unable to see whereas his wife, Wang Fang who is 54-years-old, has a difficult time walking because she has problems with her feet. Since the drought which happened in July last year, the rice and wheat fields that the family own and work on has failed to produce a substantial harvest. They depend on these crops for their livelihoods and to pay for their son’s education.

Their children need money for their expenses abroad and so the couple is forced to beg on the streets and exchange their earnings in the bank. When they were wandering the streets, Gao’s wife could not stand any longer or make her way back home so she settled to rest under a bridge for the night. Although Gao is blind, he is skilled in making small trinkets which he would give as souvenirs as a sign of thanks to strangers who sincerely donate their money to them. When they collected a large amount of coins, the banks refused to entertain them.

They went from one bank to another until finally, Postal Savings Bank of China in Huang Shi was willing to accept their exchange 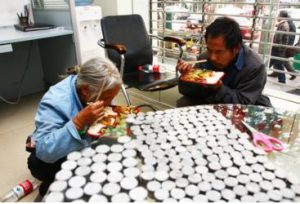 The bank staff knew that this couple lived difficult lives and since it took quite a while to count all the coins, the staff members bought the couple some food while they waited 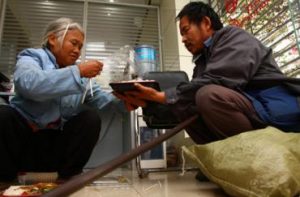 The large number of coins which they gave to exchange were mainly made up of small denominations.

While the staff were counting the coins and placing them in neat piles on a table, the couple spent their time embroidering a small bag and eating the food that was given to them. The bank members finally finished counting the entirety of the sum of coins by nightfall. There was a total of more than 3,000 coins worth about 300 yuan ($47). The couple then sent the money to their two children studying abroad. 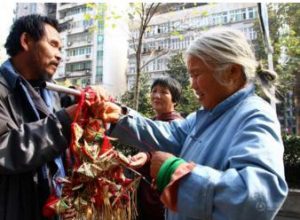 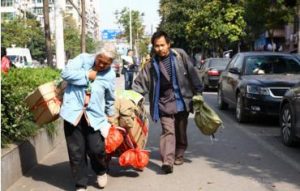 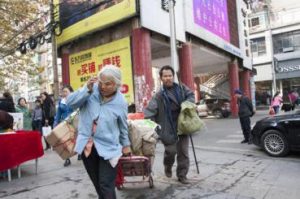 They put the needs of their children above their own needs and it the same can be said for most parents. The hardships that Gao and his wife are going through is difficult to bear and hopefully their children will realize this when they are older and will return the favor by taking care of their parents in the future.