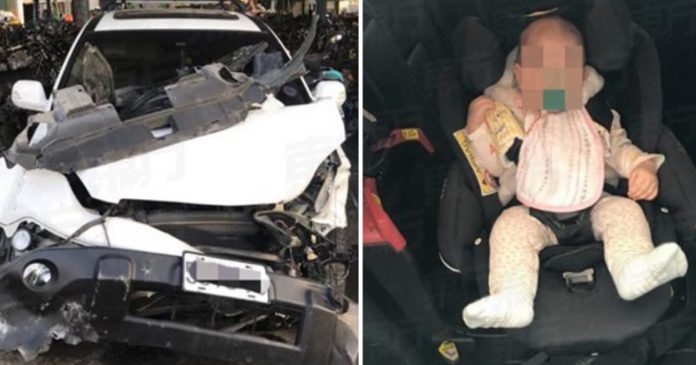 Great news to all road users who always wear seat belt when on the road. Seat belt is one of the most effective ways to save lives and reduce injuries in crashes. According to National Highway Traffic Safety Facts 2015 Data, more than half of victims who died in fatal crashes did not wear seat belt at the time of the crash.

This simple life-saving practice is not limited to adults and children as baby car seats are also equipped with seat belt. Putting it on before starting your journey could have a big impact as it could be the only thing between you and death just like this mother from Taiwan who shared her terrifying experience after being involved in a car accident. 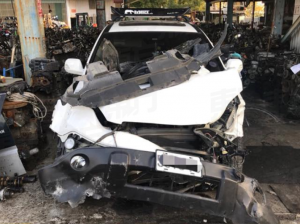 Thanks to the seat belt that was attached to her baby’s car seat, her baby was safe from fatal injuries from the car crash.

According to Oriental Daily, the woman and her partner along with their 7-month-old baby were on their way heading back home when their car was hit by another car from the opposite direction at 8 pm 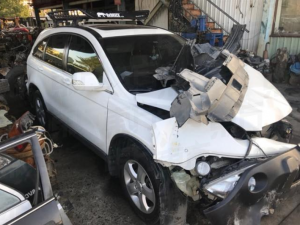 The woman recalled how her husband failed to control their car after the crash and their car went straight into ditch.

Her husband suffered from multiple bone fractures and injuries around his eyes and on his back. Meanwhile, the woman who did not wear a seat belt during the crash received 20 stitches following her head injury. 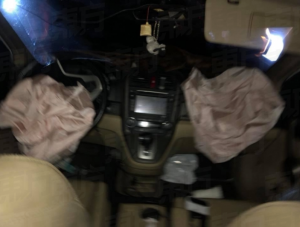 After the crash, she quickly checked on her baby and thankfully, her baby was safe and did not suffer from any injuries from the crash. The woman said, “We are grateful that Lei Lei wore a seat belt and was safe in her child safety seat. We were both injured and the front of our car was badly damaged from the crash.

However, we are very relieved that our baby did not get hurt 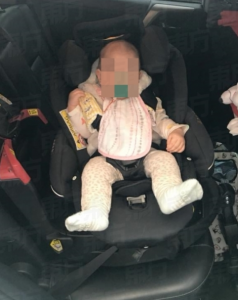 She also said that the towing company who helped them after the accident said that she made a right choice to install the right car seat for her baby and the fact that she put a seat belt on her baby before the crash happened.

Following her accident, the woman decided to share her experience to remind all parents to ensure their children wear seat belt when on the road, even if the baby refuses to wear it. She also reminded that everyone should always put their safety first by wearing seat belt as we never know when such misfortune would struck us.