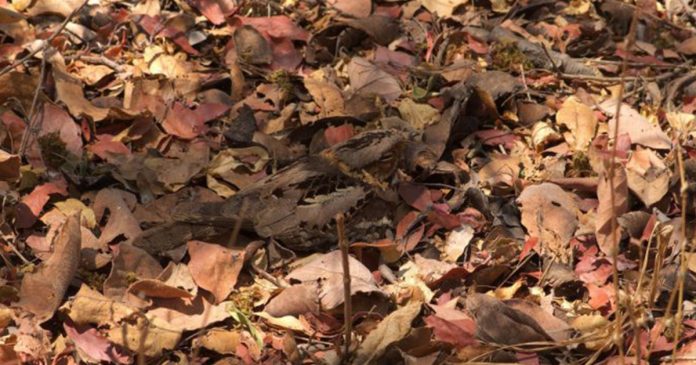 Mother nature is wondrous. All her creatures are unique and special, with each playing a specific role, whether it is the algae as oxygen producers and food base of aquatic life, or anemones providing protection for clownfishes and clownfishes providing food for anemones.

Perhaps the most well-known roles are that of predator and prey: predators evolving into efficient, lethal hunters and prey developing defensive abilities.

There are numerous animals that are capable of camouflage, allowing them to blend seamlessly with their natural habitat. Take the nightjar bird as an example.

A photo circulating on the internet is that of fall leaves on the ground. But what has stumped many netizens is that the nightjar bird is sitting in plain sight in the photo.

At first glance, it does look like a bunch of foliage; however, if you examine the image closely, you may find the bird.

Nightjar birds are ground-nesting, so the ability to blend into the environment is critical, and the photo is an excellent illustration of the animal doing just that.

Meet the mossy leaf-tailed gecko. This species of gecko is commonly found in Madagascar. Not only can it change its skin color to match the surroundings, it also has dermal flaps that allow the gecko to break up its shape when resting, making it harder for predators to see it.

The caterpillar stage of the baron butterfly looks anything like the typical caterpillar. When it is resting on a leaf, it is practically impossible to spot. The baron butterfly is native to India and southeast Asia. Interestingly, the female and male butterfly are not the same color. The males are brown, and the females are green with hints of brown.

Commonly known as the buff tip moth, this insect is found in Europe and Mongolia. When resting, the wings set back gives the illusion that it is a broken twig. It is a fairly large moth with a wingspan of 55–68 mm.

Isn’t nature amazing? You may have even seen some of these animals before but just didn’t realize it.