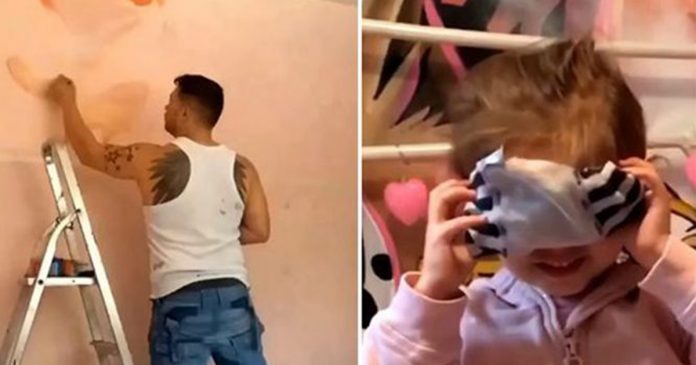 Putting little ones to sleep can often become a challenge for parents. But this talented super dad came up with a fantastic idea to help his young daughter enjoy sleeping in her own room!

Adam Hargreaves, a supermarket worker from Yorkshire, England, is the father of 3-year-old daughter Bobbie.

His little daughter never wanted to go to bed alone, so in order to persuade her, Adam, who is also a talented painter, came up with an idea of giving her room a total makeover by putting his painting skills into action

Adam filmed a time-lapse video of himself creating a stunning painting with characters from The Jungle Book, Little Mermaid, Beauty and the Beast, and The Lion King

After he was done creating his masterpiece, he led Bobbie to her room blindfolded, and once he removed the blindfold, she was just in awe.

“She was speechless—she didn’t know where to look or what to do, she said, ‘Thank you Daddy for my beautiful bedroom,’” Adam told MailOnline

Adam’s wife, Leah, is relieved at the change in their daughter’s behavior.

“I love it, she’s going to bed every time now. Before, she didn’t want to go to bed—it was a case of trying to get her to bed at all, let alone on time,” said Leah

Leah had always loved her husband’s ability and talent, but she had no idea that he was capable of such beautiful work until about five years into their relationship. One day, Adam had secretly painted their house, and Leah wasn’t too happy about the idea until she actually saw it.

She said, “He sort of kept it hidden. It wasn’t until he painted a wall in a bedroom in our last house that I found out. I wasn’t happy at first, but I saw it and told him to do the rest of the house!”

When his video surpassed over 10 million views, doing art as a way to earn an income suddenly became a possibility to Adam.

“We’re now looking into getting him sorted and making Bespoke Art his job—it’s scary but exciting and I’m a bit dubious as to whether it’s just a craze or not so I’m staying level headed,” she said.

”Working self-employed is something I have been building towards, I’ve been wanting to take it forward and build a portfolio which I think I have got one now,” said Adam.

Adam said, “I’d been planning to paint her room for about two years, but the painting itself took around three months, or 300 hours to be precise. It’s quite relaxing; time just passes a lot faster because you’re concentrating”

Well, better late than never! And there are sure to be plenty of kids out there just longing for one of his wall paintings!

Watch the amazing transformation in the video here:

17yo teen goes viral for making her own graduation party dress,...