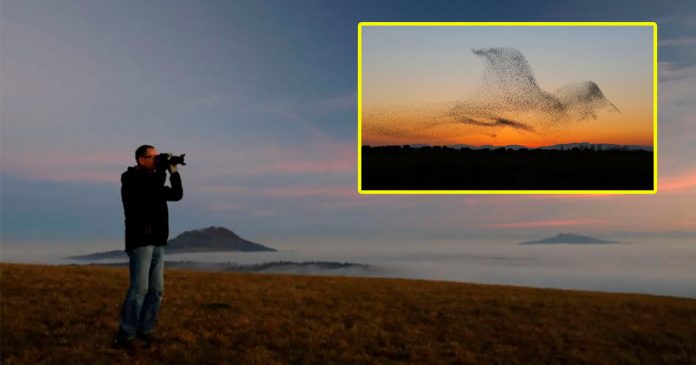 The wonders of mother nature never ceases to amaze and it is spectacularly shown in a photograph of starlings in Spain captured by a man named Daniel Biber.

Starling murmurations are quite simply a mass aerial performance where thousands of birds can be seen swooping and diving in the skies at the same time. There are many speculations to why these birds do so. One of the possibilities is that flying in a large group offers safety in numbers and their unified formations amplify their fortification by making predators think twice about attacking the group.

A semi-professional German photographer named Daniel Biber, 53, was fortunate enough to have captured a one in a million snapshot of the birds seemingly random formations

While Biber was in Costa Brava which is located in Northeastern Spain, he took the opportunity to try and capture images of these mesmerizing cloud of starlings. He knew that there was a roosting point where the birds would usually gather to rest and that they will fly around in their mass before settling down at the end of the day.

He settled on a position and said “I eventually drove to the spot every day for four days in a row in order to capture them. I picked a spot where I thought they would turn up and picked a matching foreground and backdrop in order to put them in scene.”

He took a series of photos and while he was preoccupied with taking photos of the birds and adjusting the settings of his camera to suit his subject, he completely missed an extremely rare formation the birds had done. It was not until he had uploaded the pictures to his computer that he realized he had captured something phenomenal.

Scroll down to see some of Biber’s other phenomenal photographs of the starlings:

“It usually happens that birds of prey turn up and the starlings then create bizarre forms. It can be quite erratic and completely random”

“I realised that I had captured a unique snapshot, technically, sharp and in high quality”

Mother nature has the ability to astound people with it’s beauty and we are lucky that Daniel Biber had a camera on him to capture one of these moments!