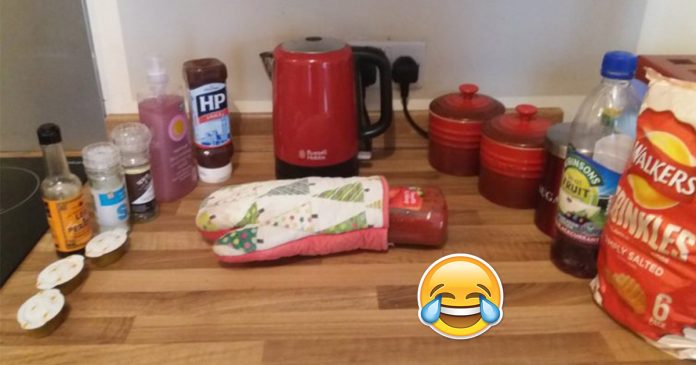 I believe we can all agree on the importance of condiments and sauces as they have the ability to take a dish to the next level, and that a death of a bottle of sauce is a truly tragic thing to witness. David Collinson from Teigmouth, England had the tremendous misfortune of having to deal with just that.

He opened his cabinets one fateful day only to be greeted with the sight of a defective ketchup bottle he bought from Morrisons that had exploded. Instead of just taking it back to the store which he bought it from and ask for an exchange, he reached out to Morrisons.

He made sure they fully understood his grief by asking Morrisons, “Why has my unopened ketchup decided to end it’s life?

Dear @Morrisons why has my unopened ketchup decided to end it’s life like this? It took the brown sauce and a stock pot with it. pic.twitter.com/qxXJmTuSfb

When he did not receive a reply from Morrisons, he proceeded to have a full condiment funeral in honor of his departed ketchup bottle.

We have had a service for our departed ketchup, the kettle conducted the service and the surviving stock pots gave a beautiful eulogy pic.twitter.com/xkqOmQ0F7q

He had placed the other residents of his pantry in the funeral procession and elected the kettle to conduct the service.

“I held the funeral because I’m never one to turn down the chance to add a little humor into the world. That and I’d had a glass of wine,” said Collinson in an interview with Time.

David my invite seems to have been lost in the post! Please can you DM me the store and the bar code to get some closure? – Jenny

He then finally got Morrisons attention but he was not done having fun just yet and posted the funeral plot in which he had buried his ketchup.

So you want me to dig him up? pic.twitter.com/PN6FdAb7Q2

In the end Collinson said that Morrisons had compensated him by returning to him 5 pounds. Though we think the laughs he brought about by his elaborate funeral is priceless!

May he rest in peace! Do you have a More card with us?-Gabby

An Angry Beaver Scares Visitors who were Enjoying Their Time Cooling...