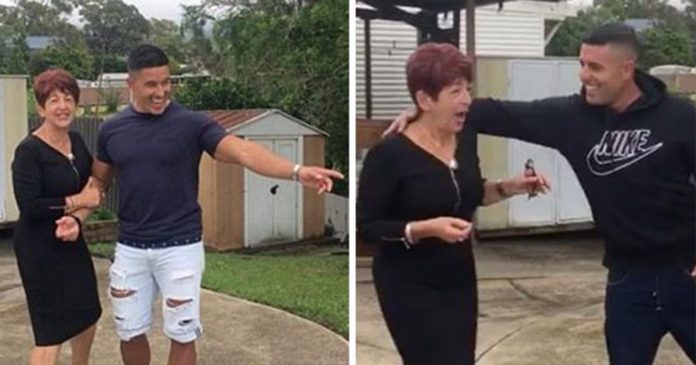 Not everyone does, but still, many people have something in mind they’d like for Christmas. In Australia, a mom told her son her Christmas wish—and 10 years later, she couldn’t believe they fulfilled it.

In 2016, Daniel Knust of Wollongong, Australia, posted a video on Instagram of him and his brother, Jason, showing their mom, Carol, her early Christmas present. Their surprised mom repeatedly exclaimed, “No! No! You can’t do this!”

“She was just very surprised and couldn’t believe it. She absolutely loved it,” Knust recalled his mom’s reaction to TODAY

Cabo sunset cruise with the fam

Pic from mercury newspaper article, thanks Sylvia and @grellis1 http://www.illawarramercury.com.au/story/5007049/bodybuilder-daniel-knust-is-wollongongs-new-national-champ/#slide=2

“Compared to the sacrifices she has made for us over the years, this is nothing,” he continued.

“A little gift to show her how much we appreciate everything she’s done for Jason and I. I’ve wanted to do this for 10 years, and today a long term dream came true. Hard work pays off, and that’s something our Mum taught us from a very young age that we’ll never forget”

The “little gift” was actually a BMW 3 Series that Carol had told the brothers about 10 years ago.

“My mother first said about 10 years ago that she wanted a BMW, and we never forgot that,” Knust said.

With our beautiful Mumma at Jason’s wedding #family @takeaphotoitwillastlonger

The brothers saved up for five years before they could buy the car. “We put aside a little each week knowing one day we would be able to get her (the car),” Knust said.

“We just thought it would be nice to show how grateful we are for everything,” he said.

Showing gratitude to our beautiful Mum who’s worked so hard to give us everything in life. Compared to the sacrifices she has made for us over the years, this is nothing. A little gift to show her how much we appreciate everything she’s done for Jason and I. I’ve wanted to do this for 10 years, and today a long term dream came true. Hard work pays off, and that’s something our Mum taught us from a very young age that we’ll never forget. #grateful #family @takeaphotoitwilllastlonger.gif @natgerada @mrs_knuts

“We got into quite a bit of mischief when we were younger, and she did a lot to keep us in line. She worked two jobs to keep us in school. And so it was a way to say thank you for everything. One of the goals, for us, was to be able to repay her and look after her later in life,” Knust said

“I’ve even said before … it doesn’t have to necessarily be a material gift, even just telling them you’re appreciative and grateful for them is pretty important. Because very often we take things for granted,” he added.

It’s wonderful to see sons and daughters expressing their appreciation toward their parents, and that’s especially evident in the scenario above with this mom’s two sons. We hope she enjoys many a good drive in her new ride.