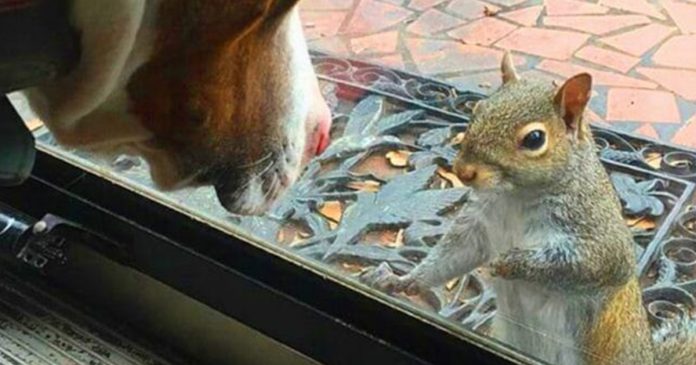 This gray squirrel hasn’t forgotten the family who gave her a second chance at  life. For 8 years, the nimble, little animal would always pop by her saviors’ house to say hello. And the most incredible instance of this happened a few years back, when she came visiting with an injured foot—and a secret she exclusively revealed to her favorite humans.

When Brantley Harrison of South Carolina met Bella in October 2009, she was just a tiny 4-week-old gray squirrel.

Back then, Bella and her three other siblings—Larry, Curly, and Moe—were left in the care of Harrison, a volunteer with Wildlife Rehab of Greenville, following an owl attack.

Harrison and her family fed the badly injured baby squirrels with fruit, veggies, formula, and lots of nuts.

Gradually, the squirrels were nursed back to health, and were released back into the wild in April 2010

LOVE this of Bella and Fox! Not too many boys can say they have loved a squirrel most of their life! ❤️❤️

Harrison and her family didn’t expect to see the squirrels again.

But, amazingly, for the ensuing years, one of the squirrels—Bella—kept returning to pay them a visit, even until today

Sweet CID sits and waits at the door every day and waits for Bella to come visit. I always wonder what each of them are thinking as they look at each other. I bet Bella wishes CID spoke squirrel, and CID wishes Bella spoke sign language. We rescued/fostered CID about 4 years ago and fell in love with him, so he was a full member of the family from day one. He was found roaming the streets and was very near death by starvation. We brought him home and soon figured out he was deaf. He is not the first deaf dog we have had, so we knew we needed to teach him sign language ,which he picked up very quickly. Now he is spoiled rotten and does not look like he misses any meals. #bellathesquirrel

“She comes almost daily for a little loving, treats, and to torment our dog, Cid, through the glass door,” said Harrison, according to WYFF4

I think she loves her mamma! ❤️ @bharrisonsc

Harrison was surprised as there didn’t seem to be anything special about Bella.

“Her personality was not any different than any other squirrel I have ever raised while she was in my care,” Harrison told The Dodo

Bella and Fox(who is now 12) has grown up loving our sweet girl! #bellathesquirrel

Yet, unlike Larry, Curly, and Moe, the affectionate Bella has not forgotten how this kind family had helped in her time of need.

“Bella sits right at the front door waiting for someone to notice she has come by for a visit,” shared Harrison.

If Bella stops by Harrison’s house, she will sit on everyone’s laps, and have a munch on some nuts. She doesn’t like to be petted though

Happy to report that Bella’s “wound” under her arm is all healed up! ❤ that girl!

Ever since, Bella has become a part of the Harrison family.

Harrison loves sharing photos of Bella on Instagram. The photogenic squirrel looks so adorable with her little hat!

Bella hopes you all have a very MERRY Christmas!!!!!

Then, one day in 2012, Bella visited with an injured foot

It took forever to get a photo of Bella wearing this hat but I love the one of her holding it best! #bellathesquirrel #squirrelsofinstagram

Again, the Harrison family helped Bella to get back on track.

Just when Bella looked well enough to return to the wild, she gave the family a special surprise

More Bella baby pics!!! You can really see their progression in age with these photos.

“Never in a million years did I think I would be able to watch my baby I raised raise her own babies. Does this make me a grandma?!” Harrison wrote in one Instagram post

These are Bella’s babies that she had in our care in August of 2012. She had an injured foot so we caught her and treated her for two weeks. Bella was a great patient. She even let me hold her when she was curled up in a ball sleeping. A few days before we were set to let her go back into the wild she surprised us with three babies! We kept the whole family in an outdoor release cage that she had made her nest in until they were all old enough to be let go. We sill had our night vision baby monitor left over from our son Fox so we hooked it up and we watched her take care of her babies at night. ❤️ They all were released into the wild in April of 2013. This was truly an amazing thing to witness. Never in a million years did I think I would be able to watch my baby I raised raise her own babies. Does this make me a grandma?!

The family took care of the squirrel family till April 2013, when the little babies were big enough to romp around in the wild

@divvyup will even make Bella socks!! ❤️❤️❤️ my sweet girl!

The bond between Bella and the Harrison family is adorable, isn’t it?

May Bella’s story inspire “at least one person to have compassion for all living things, no matter how big or how small,” Harrison said