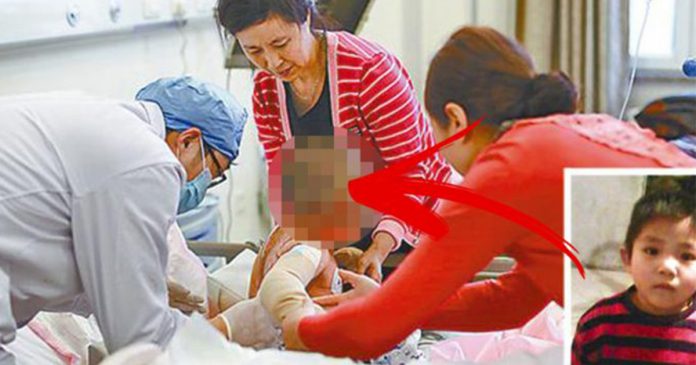 At times when a disaster occurs right before a person’s eyes, they will do everything in their power to save themselves. People will think twice, or even three times over before they decide to help another person in need even if it is their family member at stake.

This applies to a vast majority of people but that is not the case for this young boy though. In an incredible act of pure selflessness this boy put his own life in danger to try and save his grandfather from perishing in his house which caught on fire.

The shocking incident had occurred in the evening when a young boy named Rocky was at his neighbors house playing with his friends. All of a sudden he spotted smoke rising from the rooftop of his house next door and immediately headed towards it. He knew his grandfather was still inside the house as he heard him shouting out for help within the burning embers of the house.

Rocky being treated by doctors 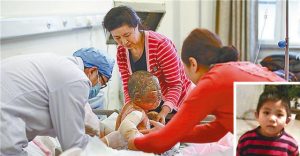 Without stopping to think twice, Rocky rushed into the burning flames to save his grandfather. He reached his grandfather who had already inhaled a lot of smoke and was extremely weak. He tried everything in his power to try to help his grandfather out but to no avail as he was just too heavy for the young boy to handle.

Realizing that the fire was spreading at an extremely fast rate and that it would only take a matter of time before he whole house came crumbling to the ground, Rocky’s grandfather instructed him to get out while he still could. He realized that he could not save his grandfather and ran out of the house to get help from his neighbors.

They managed to soothe the fire enough for them to rescue the grandfather and rush him to the hospital but they were too late as he had suffered too much damage from the fire already. He died in the hospital an hour later caused by him inhaling too much smoke and was not able to recover. Rocky on the other hand had suffered burns which covered over 25 percent of his body. Even though he must have been in an incredible amount of pain, Rocky did not show any sign of it and he was calm throughout the time the doctors were treating his injuries. He asked after the condition of his grandfather as he was extremely worried for him.

Rocky recovering from his burn wounds 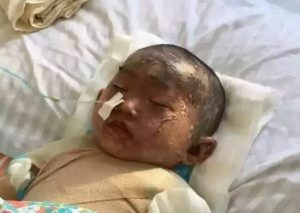 Seeing Rocky’s courage, the doctors asked him why he did not shed a tear while they were treating him and he responded by saying “a man must be strong and cannot afford to tear easily.” They were astounded by the amount of love and sense of responsibility this young boy had. So much so that he put his own safety behind him and in an incredible act of altruism, attempted to save his grandfather.

His parents did not tell him the news of his grandfathers passing just yet as they were afraid it might traumatize him especially when he was still vulnerable after the attempted rescue.