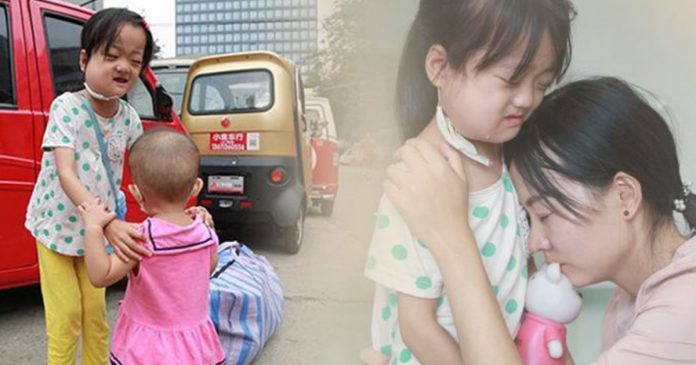 Her words make many burst into tears. Recently, this 7-year-old little girl who suffers from a rare bone disease passed all of her savings to her father. Her intention was a heartbreaking one – for her father to use her coins for her baby sister’s treatment. Apparently, her sister also suffers from the same disease.

This touching story was reported to happen in Hunan, China. According to China Press, the girl named Wang Yue was diagnosed with Osteoporosis, a disease where the patient’s bones are so weak they are susceptible to fracture.

Its symptoms include, bone fracture, low blood cell production, loss of cranial nerve function which can lead to blindness, deaf and facial stroke.

Wang Yue’s condition is getting worse day by day and she could die anytime. However, she refused to get modern treatment and just drinks traditional Chinese medicine every day.

In spite of her bad condition, Wang Yue still continues studying. It was during one her class lessons that she realised her eye sight was getting worse. She even has a hard time to read books.

Sadly, realising that only one of them could undergo the surgery, Wang Yue told her father, “Since we can’t manage to borrow so much money, I will give up on the treatment then. I have some savings here, combine it with the money you borrowed to save my sister,” she said.

“I’m big already, it doesn’t matter if I don’t undergo the treatment. Here’s some money that I’ve saved up, please take it,” she added while handing over her coins to her father.

This heartbreaking story has received viral attention from the public. Right now, a fundraising has been set up.

We really hope that they manage to collect enough fund for both Wang Yue and her baby sister and safely undergo the bone marrow transplant and regained their health back. We also wish for their parents to remain tough and patient until for the better day comes.