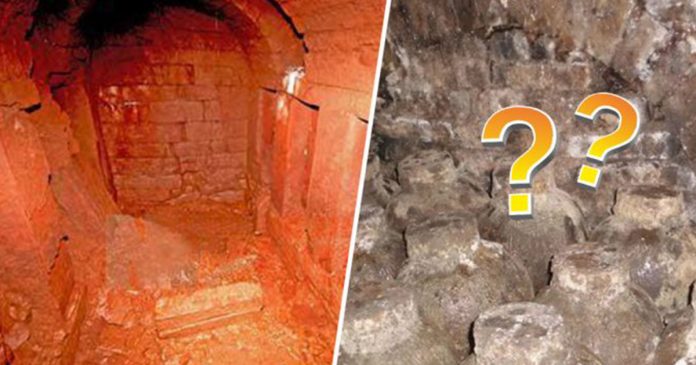 Many of us are familiar with the stories of Indiana Jones and his harrowing adventures to the corners of the world in search of lost treasure. They excite the imagination and spark child-like curiosity in the hearts of his admirers. Little did this old farmer know the that mystery that hid behind his crop chamber could rival the treasures found in any of the perilous journeys undertook by the adventurer Indiana Jones. 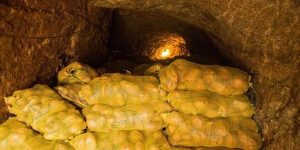 An old farmer from China had harvested his yield of sweet potatoes, packed them into gunny sacks and stored them in his underground storage capacity near his farm.

When he was done lugging all his produce into the room, he felt exhausted and decided to rest in one corner of that room 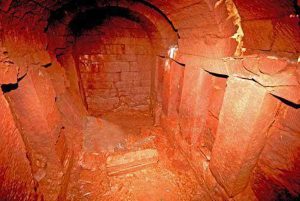 While he was resting his aching joints, he noticed a glimmer of movement in the corner of his eye. 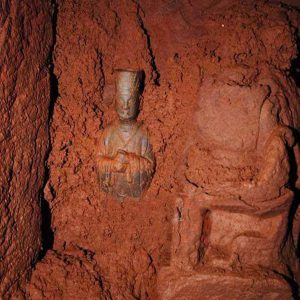 Curious to see where the source of the light was coming from, he cautiously approached the spot. In his mind he had already had the idea that it was the work of rats and that these rodents would destroy his hard earned harvest. Therefore he needed to catch this nuisance before they did any damage.

He immediately started to dig through the wall from where he spotted the light and could not believe his eyes on what he had found. As he dug through the wall, he noticed that it started giving way to another chamber on the other side.

He noticed there were strange stone arrangements by the edge of the new cavern he had dug and by it’s door there was a relic of some sort, a silver statue 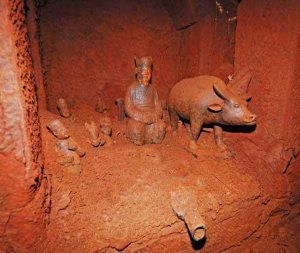 The aged farmer was exhilarated at what he had stumbled upon right underneath his feet. He called the relevant authorities the next day to alert them of his discovery and also to further excavate the chamber as he was afraid he might damage the artifacts if he wasn’t cautions.

The team of excavators came to inspect the farmer’s discovery. They noticed that there was a hill adjacent to the cavern where the old farmer stored his crops and so they decided to scout for clues on the other side of that hill.

After carefully searching he grounds, they came across a peculiar wooden door embedded in the side of the hill 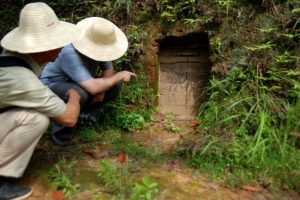 Overwhelmed with curiosity they cautiously opened the wooden door form the outside. 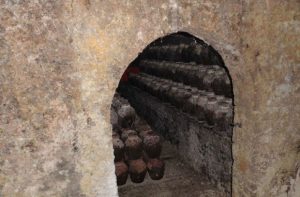 Though they were hesitant, they entered the room in order to further investigate and satisfy their curiosity 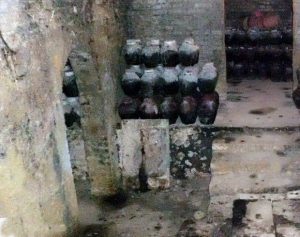 The were greeted by a somewhat foul smell which was reminiscent of mixture of moss and dust kept sealed in a stuffy room for ages. The atmosphere was also unpleasant as it was  thick which made it hard for the explorers to breathe. 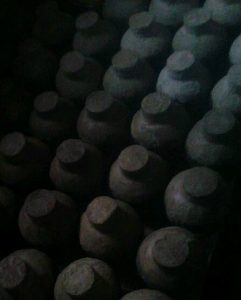 The old farmer and his companions stumbled upon a multitude of huge clay jars.

They decided to open one to peer at it’s contents 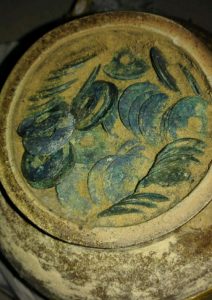 Though they were skeptical that there was anything of value in the jars, what they found came as a surprise to both the farmer and the excavators. They were filled with ancient coins and looked like they belonged in a period of antiquity. Needless to say they were exceedingly overjoyed with their unexpected discovery.

They pried open a few more jars and they were all filled with the same kind of antique coins. It became obvious to them that whoever owned the cave was someone who was exceptionally wealthy and had stored all their riches in this cavern. The coins looked so old that they estimated that it belonged to an era dating back to hundreds of years ago. 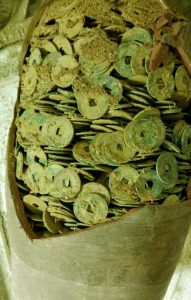 The findings were sent to be examined by historians and it was found that these long-preserved coins can be dated from as far back as when the Song Dynasty was ruling China. That was estimated to be from 960 AD to 1279 AD which made these coins around over a thousand years old.

The discovery of this huge mass of coins from the Song Dynasty was extremely groundbreaking as it was very rare for artifacts to be found from that era. Therefore it made this horde of coins even more valuable. What’s even more astonishing about these coins is that nearing the end of the Song Dynasty, the use of silver greatly diminished as they were in the process of conversion to using bank notes in 1160 AD.

These coins found in the old farmer’s backyard is nearly priceless due to their age and rarity. What a lucky guy to have stumbled upon it.