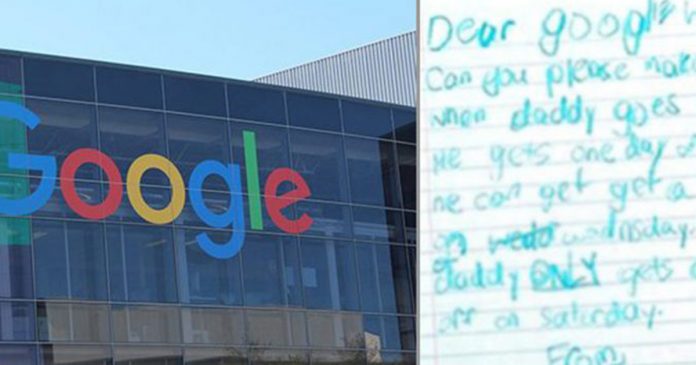 In a letter crafted in crayon, a young girl requests the bosses at Google to give her dad more than just one day off per week—especially since his birthday was coming up! What she didn’t expect was a letter back from senior management with a counter offer.

One of Google’s designers was working nearly every day of the week, with only Saturdays off. His young daughter named Katie couldn’t understand why her dad had to work so often—especially during summer time.

And what bothered her more was her dad had to work on his birthday, which fell on a Wednesday

So, she decided to write a letter to Google asking them to give her dad more days off.

Using her crayons, she wrote a thoughtful time-off request on behalf of her father.

“Can you please make sure when daddy goes to work, he gets one day off. Like he can get a day off on Wednesday. Because daddy ONLY gets a day off on Saturday.”

She signed her name, “Katie,” under which, she added: “P.S. It is daddy’s BIRTHDAY!”

And just in case that was not enough, she reminded her dad’s boss: “P.P.S. It is summer, you know”

She sent off her request, and then she got back more than she bargained for! Google’s senior design manager, Daniel Shiplacoff, her dad’s boss, responded with a letter of his own, telling her that not only could her dad get Wednesday off, but he could also take the whole week off!

She must have surely been satisfied by that!

Thank you for your thoughtful note and request.

Your father has been hard at work designing many beautiful and delightful things for Google and millions of people across the globe.

On the occasion of his Birthday, and recognizing the importance of taking some Wednesdays off during the summer, we are giving him the whole first week of July as vacation time.

Café Owner from Minneapolis Gives a Job to a Homeless Man;...