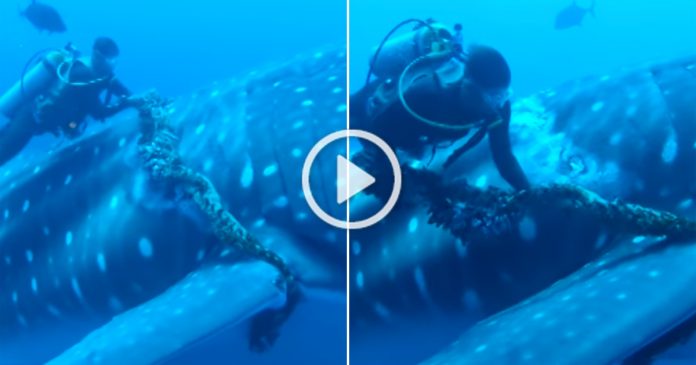 A team of divers had the experience of their lifetime when they encountered upon a huge whale shark.

Based on the Nature Conservancy, the gentle giant is the biggest species of fish in existence. Reaching lengths of 40 feet or more, these docile creatures feed on plankton. They are no threat to humans unless unduly provoked.

Just imagine the size of this giant animal compared to a human being! 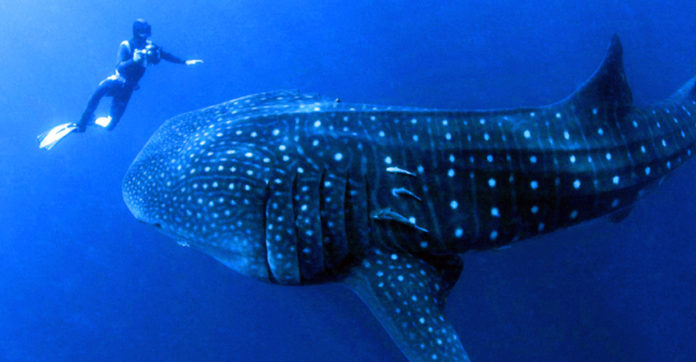 The whale shark was swimming by when suddenly it approached one of the lone diver. He expected to see the breathtaking creature glide past, however the massive whale shark started tugging on his hand.

This surprised the diver until the gentle giant moved past him and he saw a huge commercial fishing rope around its body.

The diver noticed a larger commercial fishing rope wrapped around the whale shark, cutting into its fins 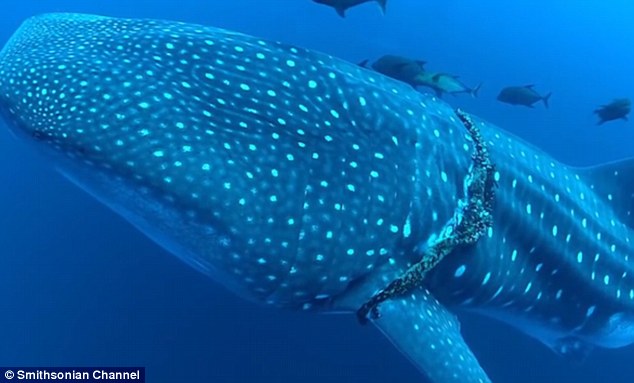 The rope was firmly around its body and wounding the fins. He immediately grabbed his flip knife and began cutting off the rope.

In less than a minute, the diver managed to free the pity whale shark. Sadly, the condition of the creature’s skin underneath the rope indicated that it could have been trapped in this rope for years.

The team of divers had a sigh of relief, especially after the grateful sounds made by the gentle giant. It could only be described as sounds of joy where the whale shark was being thankful to its rescuers.

Discarded commercial fishing nets and ropes are among some of the more common items to be found entangling marine mammals, birds, fish, turtles and invertebrates. A recognized problem, the National Oceanic and Atmospheric Administration (NOAA) has begun in-depth study into the prevalence of this problem, and the impact that it has on marine habitats.

‘It’s too adorable!’ This short-legged dog sits patiently to get free...