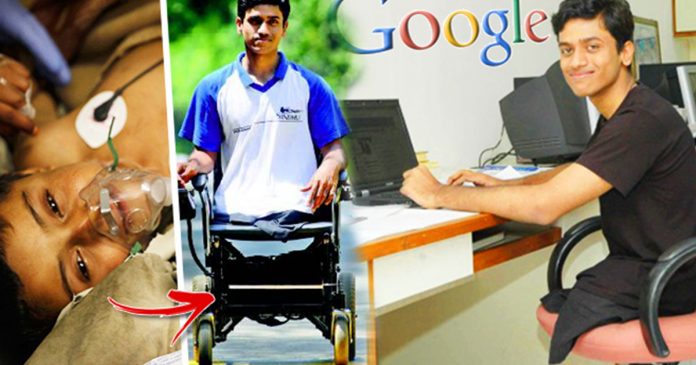 Naga Naresh Karutura lost both of his legs, and yet he considers himself to be ‘Destiny’s Child.’ This village boy is definitely special. Despite his limitations, Naresh went on to make the best of his life.

Naresh’s childhood was like any other child’s – he was mischievous, naughty, and he knew how to have fun with his little gang. His father, Prasad (a lorry driver) and his mother, Kumari (a housewife), were both illiterate. But they never stopped their children – Naresh and his elder sister – from getting an education. In fact, when he was small, his father would help him in his studies, never letting him know that he was illiterate. He was encompassed within the circle of love in the small village of Teeparru, Andhra Pradesh.

Then came the day that changed Naresh’s life. On January 11, 1993, he was going to attend a family function in the nearby village with his mother and sister. They had to take a lift in the lorry of his father’s friend since there were no running buses that day. Naresh was seated beside his father’s friend and, being a naughty little one, started fidgeting with the door latch. To everyone’s horror, the door opened wide, throwing little Naresh out!

He was rushed to a government hospital where he underwent surgery as his small intestine had gotten twisted. Within that week it was discovered that gangrene had spread through his legs up to his knees. So, his legs had to be amputated. He was hospitalized for 3 months.

After this ugly turn of fate, his family moved to the town of Tanuku. And rather than immersing in self-pity and frustration, Naresh was ecstatic to be the center of attention in his town. He enjoyed the fact that so many people came to see him and they brought along fruits and biscuits! His friends made him a part of their adventures – they carried him everywhere.

In Tanuku, both siblings were enrolled in a missionary school. At school, Naresh’s sister was his pillar. She always stood by his side. He was a happy boy with some great friends who never treated him differently. At school, he found two sources of inspiration – one was his math teacher, Pramod Lal, who always encouraged him and the other was his brilliant senior, Chowdhary.

Naresh topped his school in the 10th standard, scoring a whopping 542 out of 600. Due to this and Pramod Lal’s recommendation, he was able to get into Gowtham Junior College which also waived the fee for him. At Gowtham’s he prepared for IIT-JEE. When he appeared for the JEE exams, he secured 4th rank in the handicapped category!

With this success, he got accepted to IIT Madras and studied Computer Science. IIT turned out to be a great experience for him. Being among such intelligent people, he gained a lot. He even got to go to Boston for his internship along with 4 others, owing to his wonderful Prof. Panduguran.

Though selected by Morgan Stanley first, Naresh opted for Google since his interest lay in pure computer science, algorithms and game theory

Naresh told the Logical Indian: “I am lucky. Do you know why I say I am lucky?”

Because his life is blessed, despite the fact that he lost his legs.

He always received help from total strangers, before he even asked for it

His expenses at IIT were taken care of by the hospital where Naresh was treated. During a train journey he met a man named Sundar. Ever since then, Sundar took up the responsibility of paying his hostel fees.

Just after completing his first year at IIT, he received two great surprises from his institute – first, a lift and ramp arrangement was set up at his department for him, and second, the Dean, Prof. Idichandy, and the Students’ General Secretary gave him money to buy a powered wheelchair.

Ovarian cancer victim gets $417 million after winning the lawsuit against...