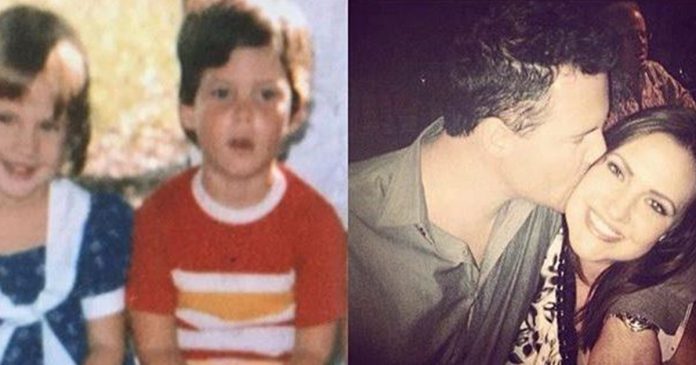 When 33-year-old Justin Pounders was looking ahead at the rest of his life in 2012, he saw himself growing old with one woman—his fiancée, Adrianne Robert. The two were preparing to move in together that July, though, when tragedy struck.

Pounders showed up at Robert’s apartment to help her with the moving process, but she wasn’t the one that greeted him. Instead, police investigators broke the heartwrenching news; after being followed home by a man the night prior, she’d been assaulted and killed in her home.

Pounders was left with a gaping hole in his chest. He had been planning on spending forever with Robert, and now he had to consider the possibility of attempting to move on.

For three years, he couldn’t bring himself to even approach the thought of dating. In 2015, though, he finally took the plunge, joining a dating site called Match.com in an attempt to wade back into the world of romance.

After some time, he matched with a woman named Amy Giberson.

Although he couldn’t explain why, Pounders found himself drawn to Giberson — so he sent her a message, and they agreed upon a first date. From there, a romance quickly blossomed; they went from cautiously optimistic to in love within the first year, feeling as if they’d found their soul mates despite the tragedy Pounders would never forget.

A year into their relationship, Pounders had joked with Giberson about how he loved her name. His first crush, he admitted, had been one of his classmates from his preschool class a full 30 years prior. Her name, just like Giberson, was Amy.

At first, Giberson joked that she didn’t want details about this other girl, since the other Amy wasn’t her.

Little did she know, she couldn’t have been more wrong.

While talking about their preschool days, the pair discovered that Sunshine Preschool in Petersburg, Florida, was where they had both gone as tots, and their ages (both 33) suggested they could have been enrolled in the same class. They each reached out to their parents, looking for preschool photos as they considered the possibility that the Amy who had stolen Pounders’ heart so many years before was back in his life once again.

Sure enough, Pounders’ mom unearthed a picture of the pair from their first days together — and just like that, a 30-year romance in the making was realized.

In keeping with tradition of making 11/18 an unforgettable day we couldn’t be more excited to finally share this. ? In our love story, our most beautiful chapter is just beginning ? @justinpounders #preschoolsweethearts #babypounders #baby #mommytobe #daddytobe

“Someone or something definitely decided we weren’t supposed to reconnect until now,” Pounders told People Magazine. “We’ve been so close to finding each other this whole time but didn’t until the time was right. And that’s now.”

Pounders and Giberson are now happily in love, but insist that a ‘higher power’ made sure they found each other once again so many years later. It’s possible, they believe, that Robert has been looking down on them —- and knowing that she couldn’t be there for Pounders in the flesh, helped him reconnect with someone who could finally make him believe in true love again.

It’s hard to say goodbye to the best year of my life but I know that 2017 will prove to be even more amazing thanks to this incredible man! Happy New Year to all our loved ones!! ? ~ The Pounders #preschoolsweethearts #happynewyear #2017 #happilyeverafter #iloveyou

Pounders explained that ‘someone or something’ guided the two to reconnect, and he has a feeling it’s the woman he fell in love with in between his relationships with Giberson.

So this visit just happened. Got to see my babes ol’ stomping grounds @floridastateuniversity @seminoles @justinpounders got to see that his wedding gift is a brick by the fountain ?? #iloveyou #preschoolsweethearts #thepounders #happilyeverafter #newlyweds #fsu

Giberson agrees. She told ABC Action that she’s sure Robert had a hand in making sure she appeared in Pounders’ life once his heart was ready to get back out there again, playing with fate from above in order to prevent the two from crossing paths too early.

We can roll with this view for the week ? HELLLLOOOOO CALIFORNIA! It’s been a minute! ☀️???? #preschoolsweethearts #California #pacificcoasthighway #pch #ritzcarlton #lagunabeach #californication

Before the couple even proposed marriage, they picked out a wedding location and honeymoon destination.

“We’re doing everything backwards, but we don’t care. We’re best friends in love,” said Giberson. “And apparently we always have been.”

One week of wedded bliss in the books and a lifetime still to come. Couldn’t be more thankful for this man & all he’s brought to my life! I love you so much, Baby!! Thank you for being my super awesome, husband!!! ??? ?: @roohiphoto #preschoolsweethearts #love #fate #destiny #married #husband #wife #dtsp #mahaffeytheater #thepounders #honeymoon #cruising #sohappy #davidbasso #kleinfeld

They got married a year after realizing how old their relationship truly was, tying the knot in front of 200 friends and family. And yes, they did make sure the logo of their old preschool was included in the ceremony!

L?VE Today and always, my Valentine. Thank you for your incredible love & support every single day. I love you so much baby! ??#preschoolsweethearts #happyvalentinesday #valentine #love #husband #wife #ido #wedding #firstkiss @justinpounders

From my first crush to my forever crush, Happy 2nd Anniversary, baby!! ? Thank you for making me the happiest woman in the world! These last 2 years have been an incredible journey and it’s only just begun. Cheers to the awesome moments & adventures that await us!! I love you more than you’ll ever know!!! Xoxo ~ love, your butter muffin Wife! #preschoolsweethearts #happyanniversary #2years #love #fate #destiny #thepounders #happilyeverafter #lovestory #married