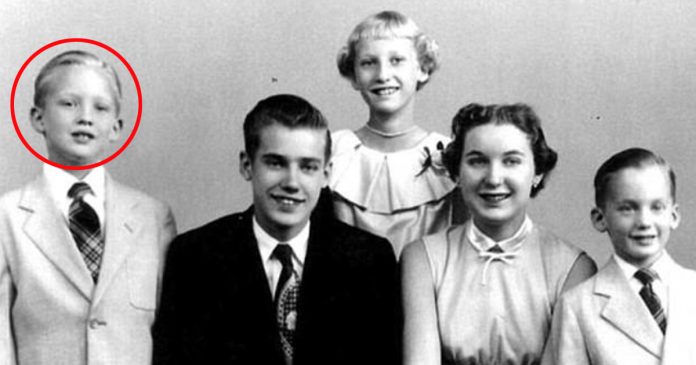 “In America, we don’t worship government, we worship God” U.S. President Donald Trump made this statement in the 2017 Values Voter Summit in Washington. President Trump’s road to the White House was certainly not an easy one for him as he wasn’t favoured by the mainstream media and many criticised him for all sort of reasons.

But one thing people cannot deny is the business success of the Trump family in the country and his capable and outstanding children.  “I respect his children,” Hillary Clinton said in one of the election debates. “His children are incredibly competent and devoted, and I think that says a lot about Donald.”

President Trump’s family business has been passed on for four generations and for each generation that took over, the Trump family gets even richer and now it is the one of the most influential families in the United States.

First, Trump’s grandfather was able to make a sum of money during the 19th century gold rush. 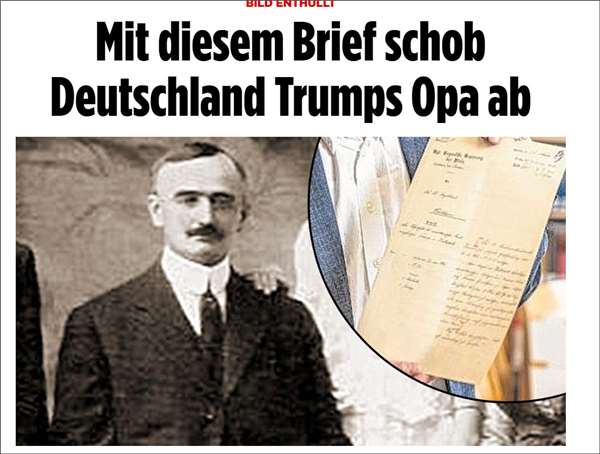 According to the “Frankfurter Report” in Germany, a historical data shows that Trump’s grandfather (Frederick Trump) wrote to the German authorities pleading not to deport him from Germany but was rejected.

As a result, the Trump family settled in the United States and this rather dramatic historical detail changed the history of the world.

When they had a firm foothold in the United States, the second generation of the family slowly expanded the family’s fortune.

Trump’s father, Fred Trump, likes to study buildings so he set up a real estate company with assets left by his father, Frederick Trump.

His company did well for a few years until the Great Depression in the 1930s. During that time, the United States experienced a Great Depression and many people went bankrupt and were displaced.

The companies that Fred Trump established were unable to sustain and he switched over to managing supermarkets for some time. 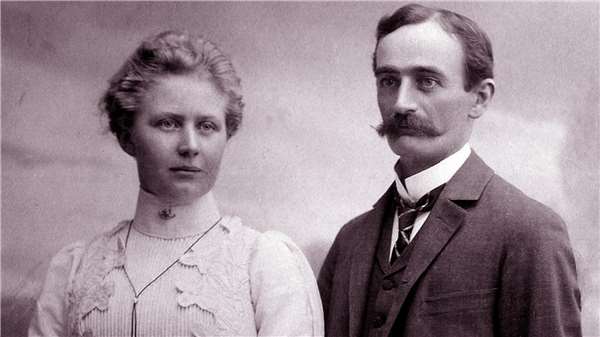 His investment was further helped by the New Deal strategy which was introduced by President Roosevelt. During the economic downturn, President Roosevelt implemented the New Deal to utilise public funds to support the construction of housing so as to improve the living environment of the general population that were affected by the Great Depression.

Fred Trump was the first to hop on board to receive this government’s subsidy and went ahead to build apartments and houses, enabling him to gradually expanded the size of his company.

Fred Trump who experienced the Great Depression lived a relatively tough life so it affected the way he brought his children up. He had strict requirements on his children as he put great emphasise on ambition, discipline and hard work.

Fred Trump had five children. Donald was the fourth child with an elder brother, two elder sisters and a younger brother.

Donald was born a year later after the end of World War 2. By then, Fred was already very rich and Donald was actually born with a silver spoon. However, Donald did not really feel that he came from a wealthy family.

Donald Trump during his adolescence and childhood time, he has the ‘rich’ look written all over his face 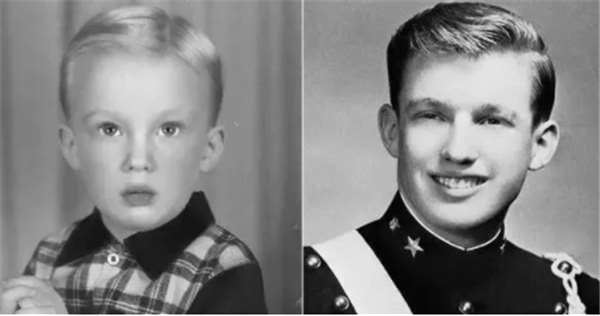 Fred Trump was very strict to his children but he was unable to restrain Donald Trump’s mischief.

When Donald Trump recalled his childhood, he once commented, “When I look at my freshman years and compared to what I am now, I’m basically the same person, there is no difference in my temperament.”

But in fact, Donald Trump was a very wild child; fighting, pulling girls hair, bullying junior students, class trickster, throwing erasers at the teacher and many more. His poor behaviour almost got him expelled from school.

Fred was so furious with Donald and finally he decided to send Donald Trump to the New York Military Academy located just outside the city for Donald Trump to continue his studies. Fred thought that the military academy would help discipline Donald.

The New York Military Academy is very different from the average private schools. The students who study and reside there are students whom have discipline problems and thus they were sent here to study under strict supervision. 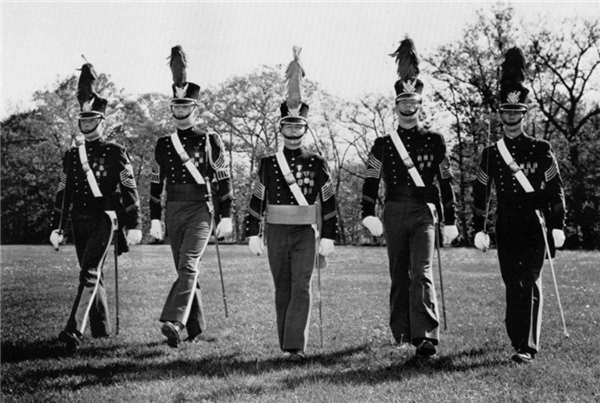 Trump was considered a tall boy compared to his peers and he was quite talented with his athletic skills. He also had a strong and aggressive character thus he was able to adapt well to the military academy’s rigorous training. Surprisingly, his results improved greatly and he often received awards for his achievements in the academy.

After graduating from the military academy, he spent two years at Fort Tenham University in New York before moving on to the famous Wharton School of the University of Pennsylvania. There, he took a major in real estate course, a relatively new course that was not available in most American universities at that time.

Trump following after his father’s footsteps 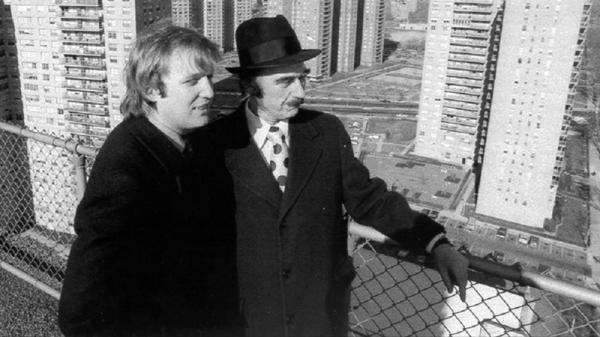 Trump studied to be a professional real estate agent and at the same time helped his father in his business. When he graduated, he had already earned USD 200,000.

Trump was obviously the successor to his father’s business but he did not easily let him to take over the business. Instead, he gave Trump a million dollars and wanted Trump to venture out into the vast market and start his own empire.

In 1973, Trump, along with his father, stood on the roof of an apartment in the final project of his father’s development, “Trump Village” 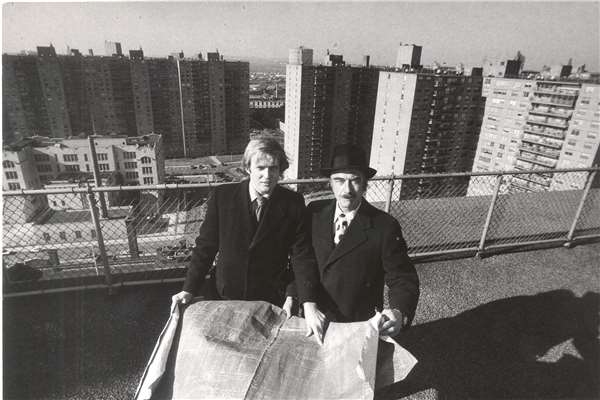 Trump’s ambition was greater than his father and he also had a unique vision and foresight in investment. He stepped into a market which his father did not have much confidence in which was starting a business in Manhattan.

Trump later on said, “A lot of my friends were declared bankrupt and I never saw them again. But luckily for me, I did not choose their path. Because what I learnt from every successful businessmen is that they do not give up easily.”

Trump worked very hard and slept only four hours a day. He would wake up before dawn to read the newspaper and after reading the newspaper, he would exercise and then start working.

Trump’s hard work had turned him to be even more successful than his father. He made even greater fortune than his father did and went on to become a rich and powerful billionaire .

Trump and his parents 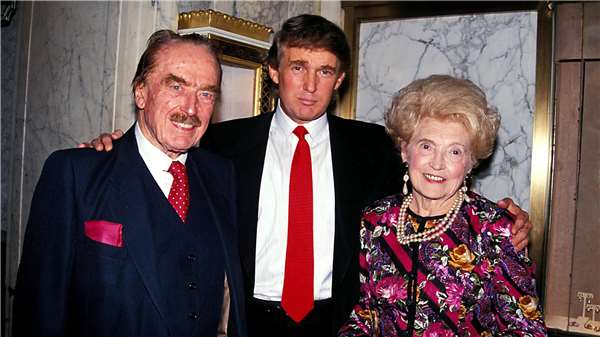 At this point onward, Trump was aware of the value brought by fame and began marketing his own image as the real estate king, a successful businessman and a well-seasoned manager.

Trump had himself advertised at casinos, golf clubs, hotels, airplanes, skyscrapers. He was so successful that ‘Trump’ became a brand.

In addition to his tycoon’s status, he is also a bestseller writer.

Books written by Trump. ‘Trump – Kiyosaki make you big money’, ‘Trump – How to Get Rich’, ‘Trump – Think Like a Billionaire’ and other bestselling books 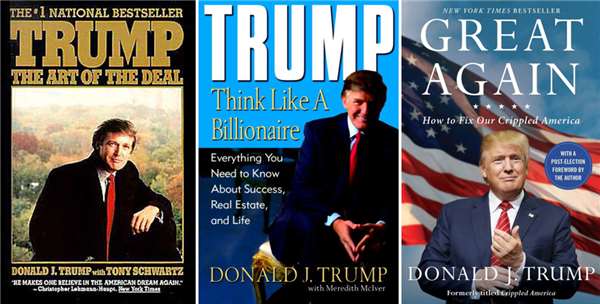 Since his personal brand has already drawn a strong image, Trump decided to venture into entertainment industry. Since 2004, Trump has been the host of the popular reality TV show ‘The Apprentice’ on NBC and has performed consistently for two years in 2004 and 2005. The show was so successful that it was nominated for the Emmy awards.

In the show, he is best known with his famous phrase, ‘You’re fired!’. 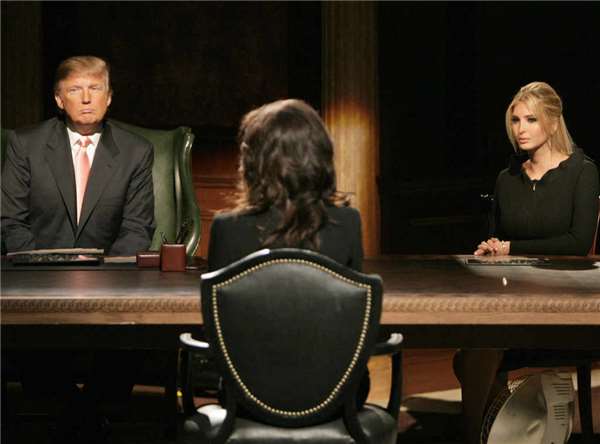 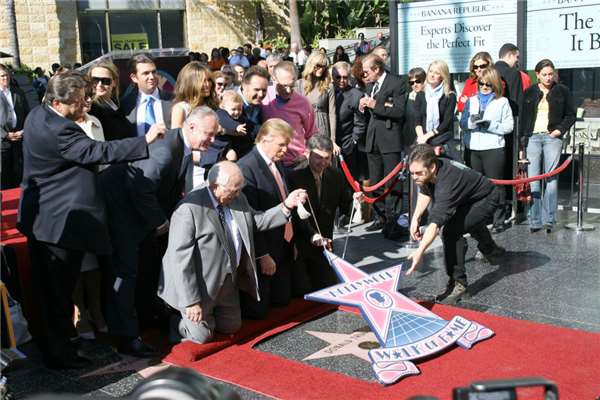 Trump also participated in many movies and TV shows but his role was very small (basically he only acted in one role). His took roles like millionaires, multi-millionaire, billionaire and the super-rich like in Home Alone 2.

Appearing as a cameo in “Home Alone 2” 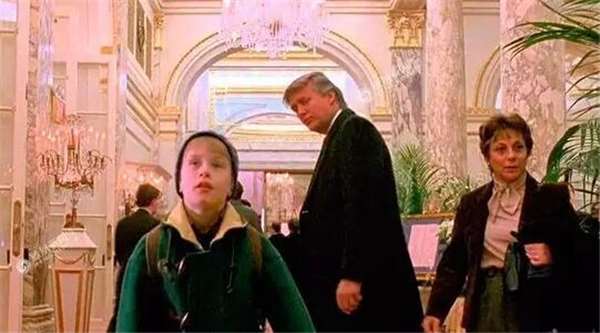 Of course Trump’s ultimate wish was to become the U.S. president 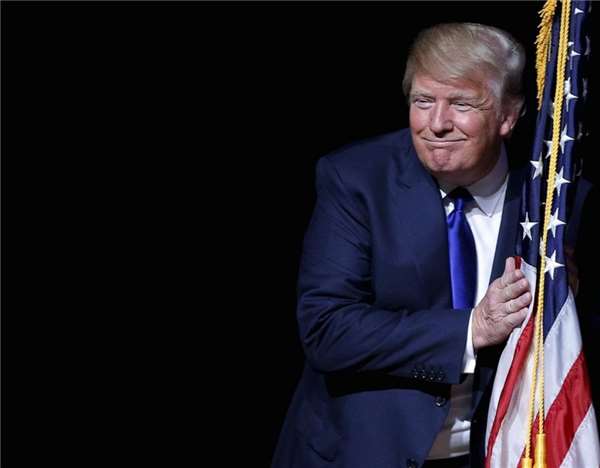 During the second presidential debate between Trump and Hillary Clinton, the audience asked them this question: “Can you tell a little about each other’s respectable places?” Hillary’s reply was: “I really admire his children … ” Even competitors have to admit that Trump’s upbringing of his children was excellent.

Each of his five children has been very successful. He is not only good-looking, well-educated, but also successful and self-reliant. 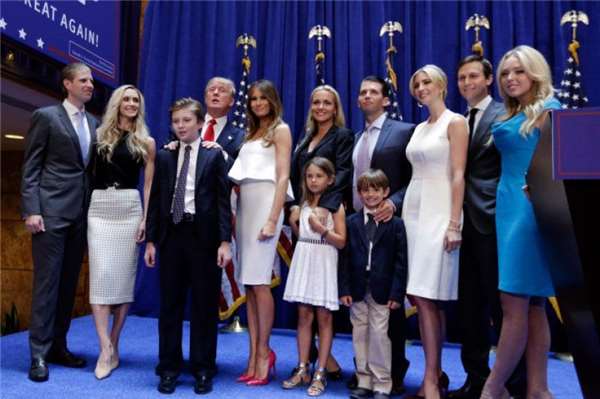 Tiffany Trump, the youngest daughter who graduated from the University of Pennsylvania, worked as an intern at VOGUE magazine, walked down the runway of the New York Fashion Week and had extraordinary musical talent. She also gave a support speech during her father’s election.

The youngest son, Barron Trump, now 11, speaks fluent Slovenian. He is quite assertive and likes math and science classes. He was on the magazine cover at the age of nine. 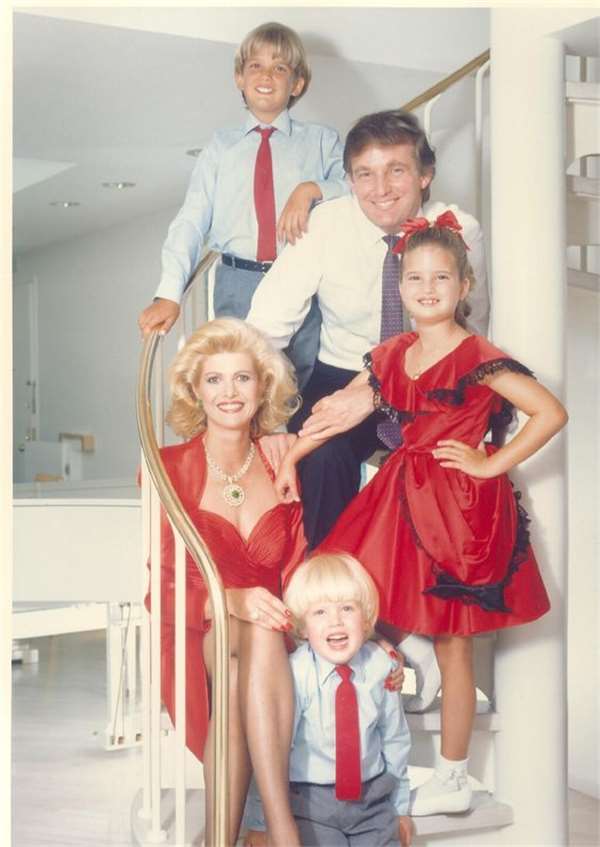 Trump and his current wife, Melania and youngest son, Barron 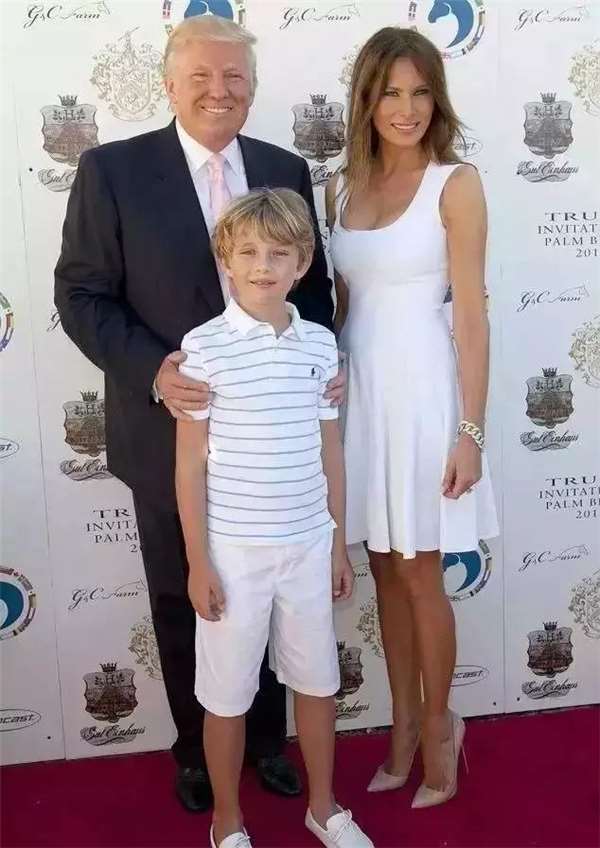 Among Trump’s children, Ivanka Trump is one of the most worthy of mentioning.

Ivanka is the daughter of Trump and his first wife, Ivana, was born in 1981.

Like Donald, she graduated from the Wharton School of the University of Pennsylvania and her academic performance was exceptional. She has been appointed as the heir by Trump and also founded a jewellery and footwear brand under her own name. ‘Forbes’ later on rated her as the wealthiest woman born after the 1980s. 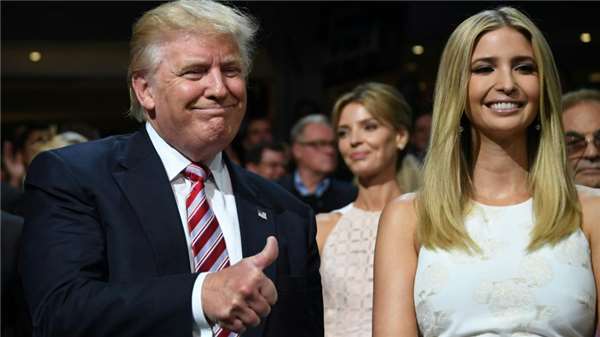 During Trump’s year long electoral campaign, Ivanka was pregnant but she participated and supported her father by flying all over the United States during his campaigns to gain support. At the same time, she managed her own company and also took the acting role of vice president of Trump Group’s.

She is truly a superwoman! 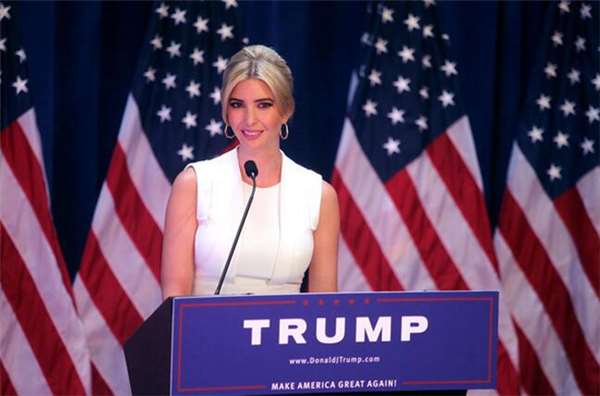 Ivanka is not only good at dealing with people. Her public relation skills are often highly praised as well. Ivanka and her dad are totally different in style. 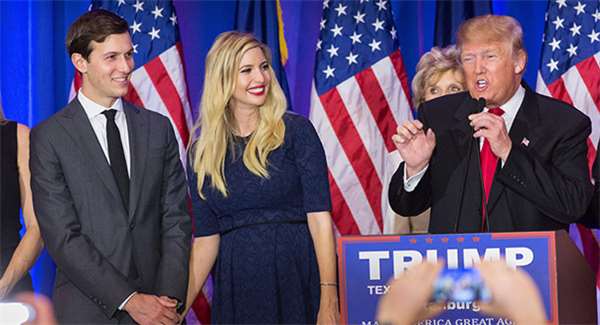 Ivanka’s husband, Jared Kushner, is known as a business prodigy, CEO of a family-owned real estate company and publisher of the New York Observer.

Jared was an important military strategist at the Trump election. Although he did not hold a formal post at Trump’s campaign,  he helped Trump to facilitate the restoration of some important figures including media tycoon Freddie Murphy, the founder of Fox News.

With Jared behind the scenes, Ivanka with her two brother-in-laws replaced a campaign manager and took over the election business 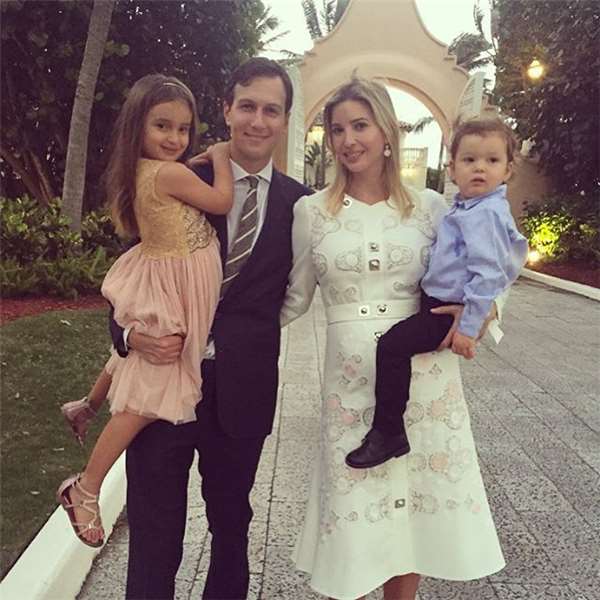 Clearly, Trump was very confident with his children. After a successful election campaign, Trump said he would hand over the business to his three children.

“Ivanka, Eric and Donald Jr. will be sitting here, my children will be managing the company and I’m going to manage the United States.”

By deciding so, his three children, Donald Jr., Ivanka and Eric, will have full control of Trump’s assets.

During a program, Ivanka was asked if she wanted to run for the U.S. president and she said, “Although I do not have a foothold in the political arena now but who knows that I might change my mind when I am 50 years old?” 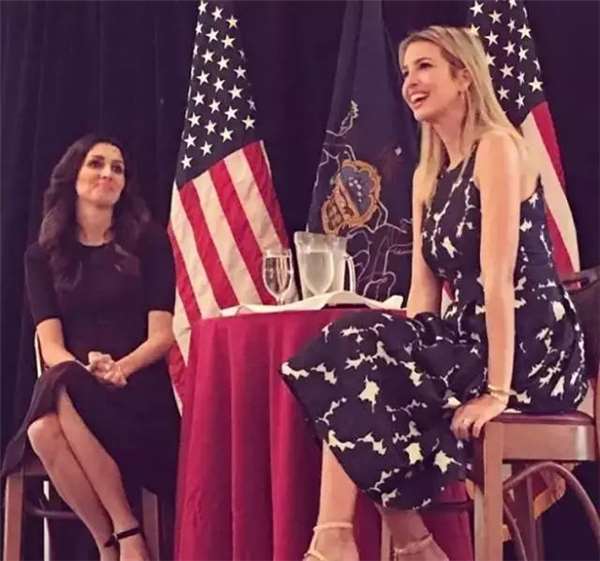 Who said that the Trump family could not produce another U.S. president?