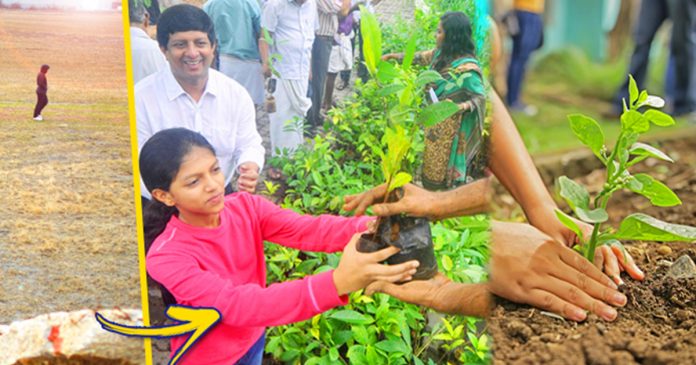 Nine-year-old Hani is on a mission in Mangaluru. She is determined to plant trees to make her neighbourhood a more pleasant place to live. So just what inspired a little girl to take on the global warming phenomenon all on her own? Just a bad day on the playground.

Hani HR was out playing with her friends in the Jappinamogaru neighbourhood when the intensity of the heat cut their game short. Disappointed by the sudden change in plans, Hani sadly went home. When she found her mother she asked her with burning curiosity – why was it so hot that she couldn’t even open her eyes?

Hani’s mother Pavithra Rathan shared with TOI the main points of their enlightening discussion. “She wanted to know why it was so hot. ‘Can’t we do something to bring the temperature down?’ I listened to her questions patiently and then told her that it was hot because we cut trees, and the forests are vanishing,” said her mother.

The St Agnes school student’s interest piqued after she heard this justification. Refusing to understand why people simply don’t stop cutting trees, she picked her mother’s brain for a long time and learned that people cut trees to build offices, commercial, and residential property.

As the saying goes, she wanted to start at home. But she came across a roadblock here, as her mother explained to her that she couldn’t plant trees at home since they lived in a rented house. So little Hani shifted her focus.

She decided to target people who owned their houses and were allowed to plant on their property. The 9-year-old was ready to pitch in all her pocket cash to buy saplings from the nursery. Encouraged by her parents, Pavithra and Ratan Kumar, she even enlisted the help of her friends to go ahead with the plan.

“I did not want to discourage her. I told her that I will support her in her project and be with her. I got in touch with Reshma Shetty whose daughter is Hani’s batchmate in their dance class. They soon had a team of students, including Athisha Shetty, Krishiv Shetty, Calvin and Jithesh,” Pavithra told Times of India.

Together, Reshma and Pavithra helped the kids buy 28 saplings of neem, pomegranate, drumstick and other varieties.

The parents prepared the kids and let them know that they might face rejection. And prepared they were. They put up a brave front and headed out the door. Before going on the sapling run, they made charts and diagrams on afforestation and the benefits of growing trees.

They received mixed reactions from the households they visited. Some let them plant the saplings on their own, others simply took the plant and promised to follow through. And just as expected, some refused to take the saplings at all.

All in all, the kids were happy with the overall positive turn of events. The initiative had been a success in their eyes. But not one to bow down after the first round, Hani is more determined than ever to continue her project to save the environment. She now has her eyes set on reducing the use of plastic by reaching out to people and educating them.

We can only hope to see more kids like Hani taking the lead in making the world a better place with enthusiasm, courage and commitment.

These couple lost their 2-year-old daughter and a year later, they...