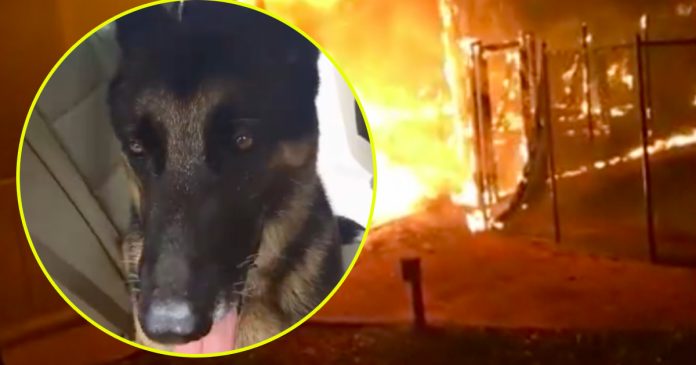 We count on our pooches to be there when we get home from a long day. But for the most part, the contemporary domesticated dog isn’t expected to do much “protecting.” Many of those of instincts were bred out years ago as dogs became more reliant on humans for survival.

But every once in a while, a canine like Maxx surprises everyone with how intuitive and intelligent he is. If it weren’t for the stunning act of heroism and bravery by this German Shepherd in 2016, the Feaser family might not have lived to tell the tale of what happened.

A mother, father, 4-year-old boy, and a 2-year-old girl were all trapped inside their burning home. It took a team effort to get them out. When neighbors saw smoke billowing out of the windows of the home, they sprung into action until emergency services could arrive at the scene, according to NECN.

They used patio furniture to smash one of the windows of the home, and pulled the mother to safety. She was incoherent, and attempted to re-enter the home to save her family. Neighbors and friends restrained her until Fire Rescue and emergency medical services arrived.

The situation was growing direr by the second, and the house was now engulfed in flames

The dad, Brent Feaser, was still inside, as were the two children. Firefighters were blinded by all the smoke inside.

Firefighters were able to find Brent and pull him from the flaming home to safety. He’d inhaled a significant amount of smoke, and had serious burn wounds, but was still alive. Rescue workers feared that the fire was too advanced to allow re-entry in order to save the children.

The thick, black smoke filling the house made it impossible for the rescue team to see anything. Without knowing the layout of the house, or where the children were in the house, the outlook was grim, but that’s when Maxx sprang into action.

Just as firefighters realized they couldn’t enter the burning house despite there being children inside, Maxx took command

Maxx darted back inside of the blaze, and the team of firefighters decided to follow him closely. He kept low to the ground as he weaved through the blazing home and led firefighters directly to the bedroom of one of the children. Firefighters scooped up the child and followed Maxx out of the house.

This courageous canine wasn’t about to let anyone perish, so Maxx turned around and did it again. He ran back into the fire, leading rescue workers right to the bedroom, and then led them back out again. Both children survived. Medical and rescue teams thought the children wouldn’t have been able to stay inside the house much longer without suffering long-term damage.

Brent and Margo Feaser, along with their two children were rushed to the hospital all suffering from smoke inhalation and burns from the fire. They were in a critical, but thankfully stable condition and made a full recovery, according to the Orlando Sentinel.

Maxx was treated by a local vet for smoke inhalation he sustained when he re-entered the house. He also made a full recovery and rejoined his grateful family as the ultimate hero.

What an amazing dog!