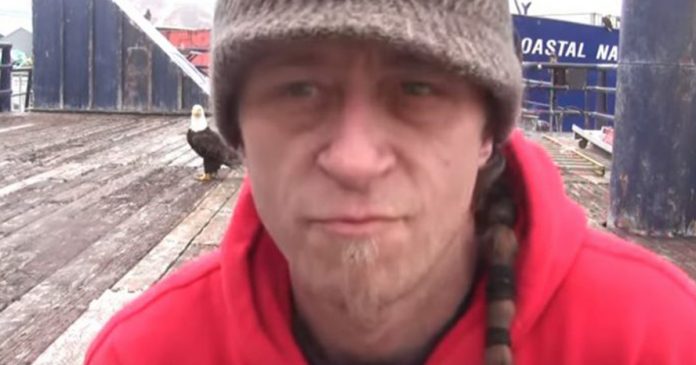 Fisherman Jesse Pecks spotted a bald eagle on the deck of a boat nestled in the seaside town in Unalaska, Dutch Harbor and he wanted to feed it. A bigger surprise was waiting for him though…

To see a bald eagle in the wild is said to be a chance encounter; a stroke of luck and a rare occurrence.

And to see one this close outside of zoo let alone hand-feeding it is truly one of nature’s blessings.

The video was first filmed in 2013 and is now resurfacing, doing the rounds on social media to the delight of its viewers.

As soon as Peck tossed a handful of food—the majestic birds flocked over to feed as if they were a colony of seagulls. 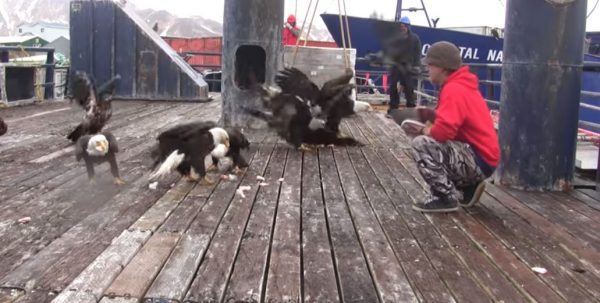 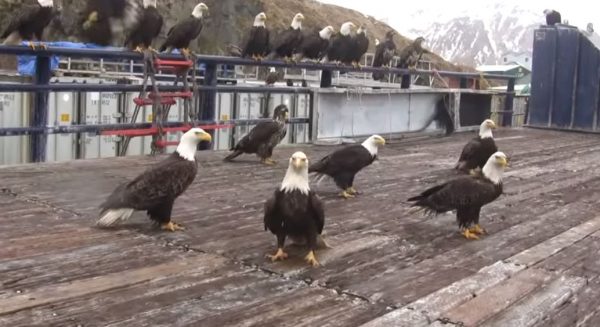 …showing yet another row of these rare birds.

And the cameraman’s not done.

After that, the video panned upward—showing that there were still more birds hanging around above the scene. 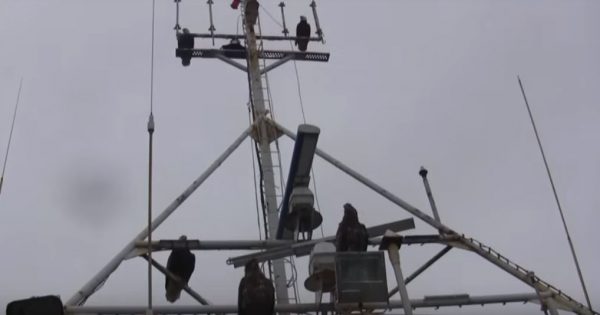 You have to watch it yourself to get the full effect:

The video which features human and wild birds interacting is a perfect demonstration of the birds breeding and thriving in the seaside location. This rare situation is apparently a common sight in the town. Such event takes place on a daily basis in the fishing town and is drawing crowds and attracting tourists to the famous fishing town.

In the late 20th century, the bald eagle was on the brink of extinction and was put on the endangered species list. Their population have since recovered and the bald eagles have been removed from the endangered species list with a majority of the population now settled in Alaska especially in Unalaska Dutch Harbor. Bald eagle is an opportunistic carnivore and consumes a variety of food although the bald eagles in Alaska mainly consume fish which makes up of 66 per cent of their diet. Hence, why the birds chose to settle in Unalaska Dutch Harbor.

This rare phenomenon of a fisherman hand feeding a convocation of bald eagles is truly an amazing scene and the close proximity between the birds and humans is an extraordinary occurrence.

The video has been viewed over 7 million times since first being uploaded in 2013 and is a testament to human’s curiosity for these huge birds.