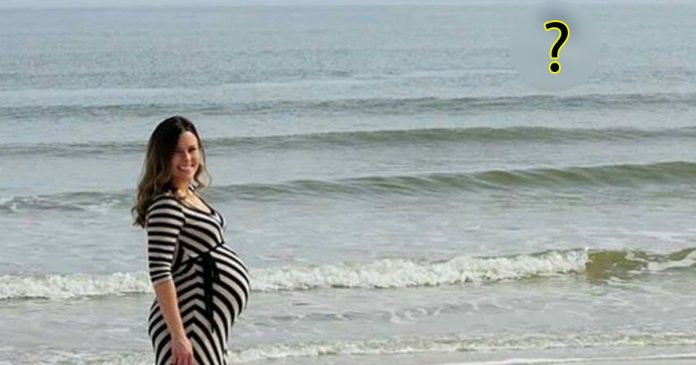 Dan Mozer, a 30-year-old financial business analyst, and his wife Angeline were expecting their first baby early last year. Angeline was in the ninth month of her pregnancy and near delivery. They wanted to commemorate this beautiful life event by taking some maternity photos at a nearby beach in the Jacksonville, Florida area.

It was a Saturday afternoon and the weather was perfect for a photo shoot. Upon arriving at the beach, the couple looked for a scenic spot and started taking photos. Using the ocean as the background, Angeline posed casually, looking at the camera with a smile as her husband took her photo.

The moment Mozer snapped the pictures, an amazing scene appeared! A dolphin vibrantly leaped out of the ocean in the background, then plunged back to the water. Mozer captured this exuberant and seldom-seen moment in a burst of three photographs.

A once in a lifetime shot. Viewer Dan Mozer shared this image of his wife Angeline as they were taking maternity shots at Atlantic Beach. #Dolphinphotobomb

“Someone started yelling to us that there were dolphins, and we could see their dorsal fins,” Mozer told Yahoo Parenting “Then, out of nowhere, this thing just jumps out of the water.” He continued “When I took it, I was like, ‘Oh, my God!’ Unfortunately, she totally missed it.”

The jubilant leaping dolphin accorded perfectly with Angeline’s maternity image, resulting in an incredible shot. They sent the photo to their local news channel, News4JAX, which then shared the endearing photo on their instagram page. The picture received many likes and positive comments.

“How quickly I forget how magical a dolphin jumping out of the water is! Now I’m picking my favorite jump!” said Mozer, laughing.

Mozer attributes this alluring shot to his unborn son, whom they later named Courtland. He believed it was Courtland who was “summoning the dolphins.”

“And, no,” Mozer adds, “we’re not changing his name, as some have suggested, to Dolph Finn.”