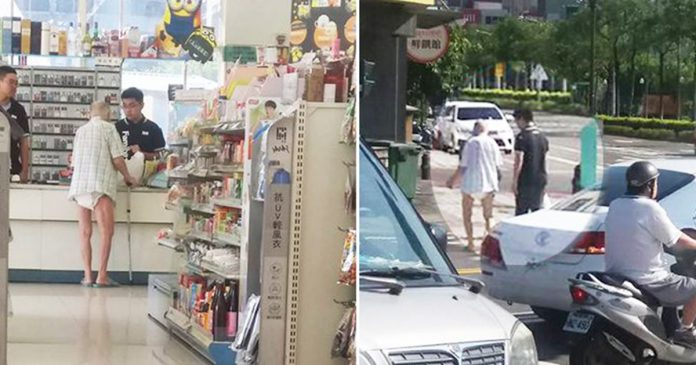 What this thoughtful cashier did to an elderly man with Alzheimer’s is purely compassionate and heartwarming!

The incident happened on July 13, when Xiao Xuan visited a convenience store in Tainan, Taiwan, to have breakfast with her son. She had always felt the service staff of the store were exceptionally patient. Her intuitive feeling proved to be correct after she witnessed a touching scene.

That morning, she saw an elderly man entering the convenience store. The old man was only wearing a shirt and a diaper.

She guessed he could be an Alzheimer’s patient, as Xiao Xuan’s grandpa had the same disease.

Hearing this, Xiao Xuan pondered why did the cashier stop him from buying more bottles of milk. “Isn’t it better if he buys more?” she thought. Only later did she find out that the elderly man was actually a regular customer, and the cashier understood his situation well enough to know what he needed.

After paying his bill, the elderly man walked away, but the next moment she saw the cashier leaving counter.

Then he quietly followed the elderly man as he walked out of the store and made his way home.

Ten minutes later, the cashier returned to the store, it seems after ensuring the elderly man had safely reached home.

She shared the snapshots of this cashier’s kindness on Facebook. The cashier even helped the elderly man to carry his bag.

Xiao Xuan’s Facebook post has since gone viral, garnering more than 44,000 reactions. Many netizens are impressed by the cashier’s warm-hearted gesture.

“He is so thoughtful. What a heartwarming story,” another commented.

What this cashier did is absolutely heartwarming—he went out of his way just to ensure the safety of an aged customer with Alzheimer’s.

His kindness has touched many hearts and it is definitely something we all should learn from!

Woman buys a 50 cent box of cotton swabs and discovers...