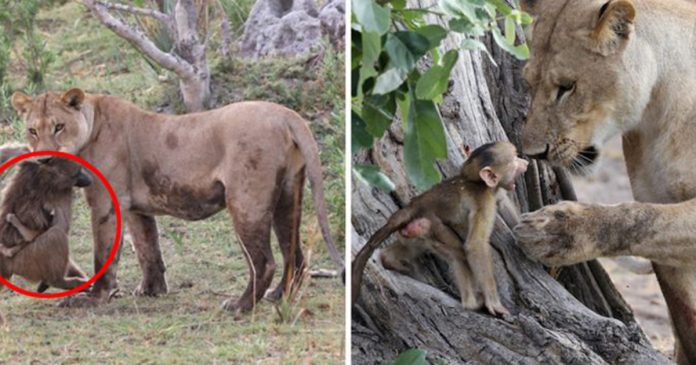 An unexpected twist occurred during an encounter between two very different species was captured on camera where a baby baboon came across a lioness, moments after the lioness took his mother’s life away. The incident took place in a safari in Selinda Camp which is in the northern Bostwana.

Photographers, Evan Schiller and Lisa Holzwarth were on their way for game hunting when they came across of a nervous encounter between a group of lioness and a large troop of baboons. The lionesses were seen running through the tall grass, chasing after the baboons. They said that the baboons were making a lot of noise, totally warned and frightened when running for their lives.

“30-40 baboons were heading in our general direction, making a lot of noise,” Lisa said.

In the frightening scene, the baboons were seen scampering and shrieking as they headed for tall trees for protection. However, one brave baboon came across a dead tree and tried to scamper its way up on it but unfortunately, a lioness was a step ahead from it.

In just a few seconds, the poor baboon got snapped up by the wild feline’s jaws and got killed instantly. 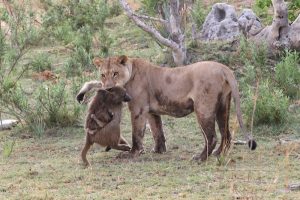 However, the lioness did not realise that a baby baboon was attached to the dying baboon. As his mother was helplessly dying in the lioness’s jaw, the baby baboon slowly disengaged himself from his mother’s body.

He tried to climb up a tree but was apparently too weak and too small to do it by himself. 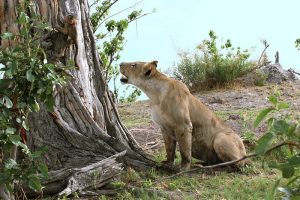 At this moment, the lioness realised the baby baboon’s presence and slowly made its way to him. 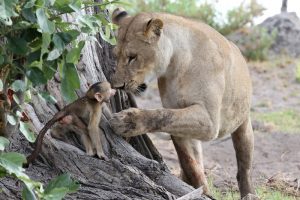 Moments later, she picked up the small baboon with her mouth and laid him down on her front paws softly. 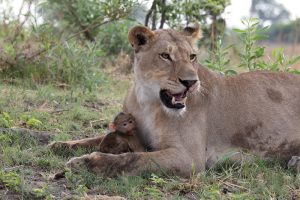 Evan was in terror when the lioness came across the baby. He said “The baby was showing signs of physical harm and fatigue from the whole ordeal. The lioness picked the baby up in her mouth—it was in agony watching the baby’s ordeal—and I kept on turning off the video option on my camera because it was hard to record.”

Surprisingly, the baby baboon held on to the lioness’s chest and started to suckle it – he may have been hungry and tired after the ordeal. 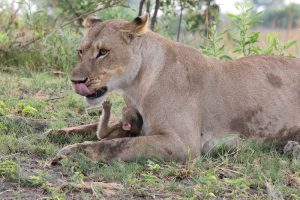 While the duo were resting, two lions suddenly arrived and their sudden appearance was not welcomed by the lioness.

The lioness acted aggressively towards the lions. 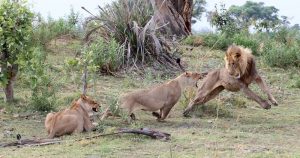 Was she defending the baby baboon or she was not just interested in their attempt for a mating?

However, not quite far away from the scene was a big male baboon, believed to be the father of the baby baboon who was obviously waiting for a chance to rescue his offspring from the felines.

While the interaction between the lions got chaotic, the male baboon stole his chance to rescue the baby to safety. 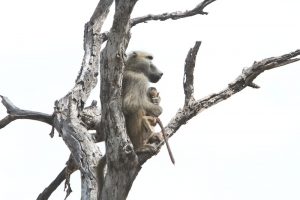 At last, the lions moved away to another place and the male baboon brought his baby to a safer and shady area. 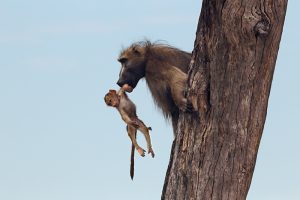 This scene has inspired both Evan and Lisa tremendously. “No matter what,” Lisa says. “The young baboon remains an inspiration to me—and a reminder, that life is fragile and no matter how much we fight to control its outcome, all we can do is live in the moment.”