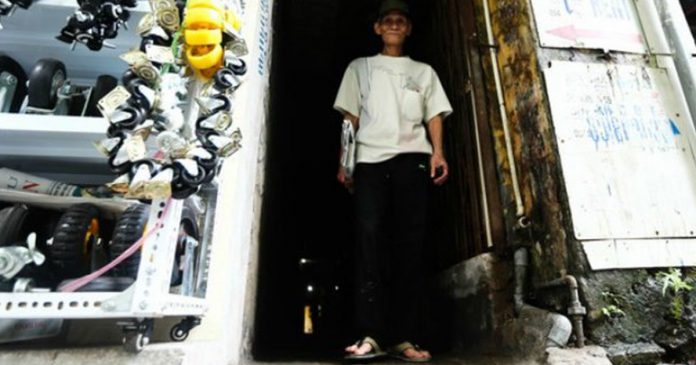 There is an old, derelict house located in a small alley in Hanoi’s Old Quarter, in Vietnam.

Several occupants live inside, including this elderly man and his son, who reside in the smallest “room” of the house. 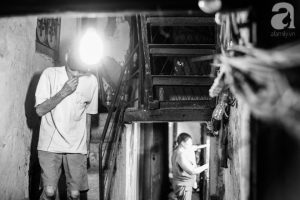 Meet Cao Chu Van, 70, who, along with his 29-year-old son, have called this small space their home for the past 25 years. Their home is actually an old closet.

Due to poverty, he resides in this confined space, where he lives most frugally. His only possessions are some clothes, a water bottle, a mirror, a comb, and some newspapers.

There are many small rooms in the old house, but his tiny space must set the record for the smallest, he shared humorously. 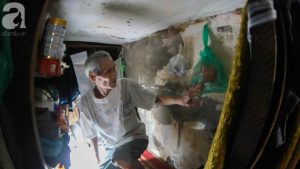 Mr. Cao’s home is 1 meter high, 2.5 meters wide, and 1.4 meters deep. From the staircase within the 16-meter-square building, one can look straight inside his living quarters, for there’s no door.

And inside, neither is there a table, nor chairs. 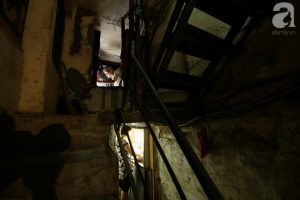 Despite having no door, Mr. Cao jokingly said that his “home” is well-secured, because there’s nothing of worth for the likes of any thief to be interested in. 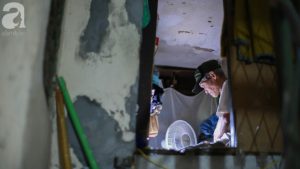 As Mr. Cao is without his own bathroom, he uses the public restrooms. During the summertime, which is very hot and humid in Vietnam, his room is like a hot stove, but he says, “I’m used to being here, they say it’s hot but I feel so cozy at home.”

For the past 25 years, Mr. Cao has become accustomed to not being able to stand straight in his home, for the ceiling is too low. So, simple things like changing clothes cannot be done standing; rather, they are accomplished by bending or lying down.

Moreover, the smallness of the room that Mr. Cao and his son inhabit means the two of them have to lie at an angle across the room while sleeping. 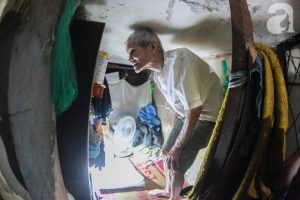 There are rarely any guests here, maybe except for the neighbor, who owns the property, and who has allowed Mr. Cao and his son to live here at no expense. 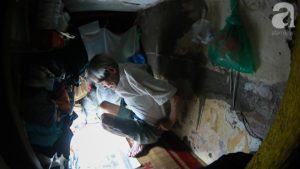 Mr. Cao mentions how people are curious about his life, his wife, how he takes care of his son, and his son’s education. But, the old man apparently doesn’t answer their questions, and just smiles sorrowfully, seemingly not wanting to discuss these things.

We only know that his wife hasn’t lived here for a while, she’s apparently “away.” One thing that we did learn about his life, however, is that he enjoys reading the paper each day. For Mr. Cao, newspapers don’t just serve as a source of knowledge, but are a kind of “companion.” He’s normally seen reading in a squatting position, with his knees against his chest. However, the only challenge in reading is that there was initially no light in the small room.

Luckily, his neighbor helped him out, and gave him a lamp and fan. 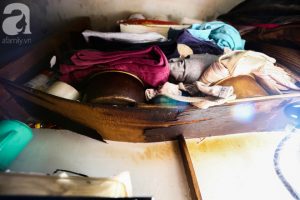 To eat, Mr. Cao normally spends about 10,000 to 15,000 Vietnamese Dong, which is roughly half a dollar, to buy a simple meal on the street. But, for this positive man, “The meal is as delicious as any quality restaurant meal to me,” he said.

Mr. Cao does not have a stable job, nor does he receive a pension. He says that he tries to pick up the odd job here and there to make ends meet. Perhaps he’ll work in a coffee shop for a while, and then in another place a little later.

He didn’t seem to want to delve into too much detail. 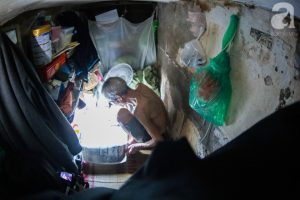 Despite the hard life he leads, the 70-year-old worries mostly about his son, whom he believes should have a normal family, and a better life. “Living in this tiny ‘house’ has made my son become self-critical, and he closes himself off from the outside world. When he gets married later, I must ask him to go outside more often,” Mr. Cao said. By the end of the interview with the reporter from TTVN, Mr. Cao gives a chuckle and says: “I’m old now, I do receive assistance from others, but I don’t expect anything. I’m still healthy and I have enough money to live off. You see my life is tough, but I see my life is much happier than many others, because I still have a place to live.” He continues, “I can earn money for my meals, and for the newspapers that I read. There are lots of impoverished people outside in the world, who don’t complain [about their lot in life], not even a word.”