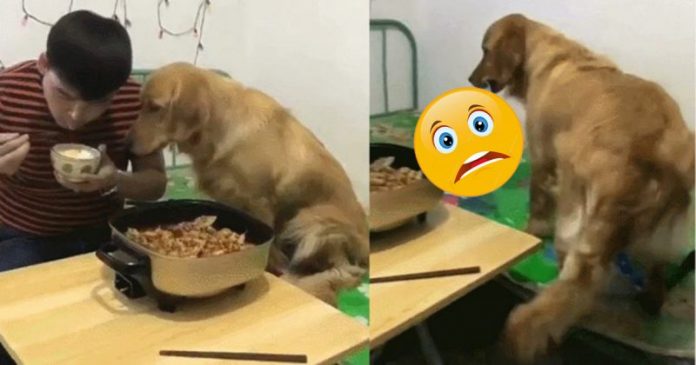 To many people, golden retrievers are good companions. Their reliable appearance and personality captures the hearts of many fans, but did you know that they also love to eat and are naughty in nature?

This golden retriever named Goldie saw his owner having a hot pot dinner and thought ‘No way, I also want a bowl!’ And of course, after his owner saw his pet’s reaction, he will definitely give him a portion to eat but under the condition that it must bring his own bowl!
‘If you want to eat, bring a bowl!’

But Goldie was very clever, bringing a bowl will not satisfy his craving! The work I help you to do, from fetching newspaper to collecting your bills! A bowl is not enough!

▼ So Goldie went and fetched… not his usual bowl but it was a large basin!!!

His owner was startled after he saw the basin that was brought in. If I pour the whole hot pot in it, my hot pot might not be enough to fill it! I know you eat a lot but you are not supposed to bring a large basin as a bowl to eat!

▼ His owner was left speechless by his pet’s actions. I made you a good meal just now and this here, is my meal! Okay?