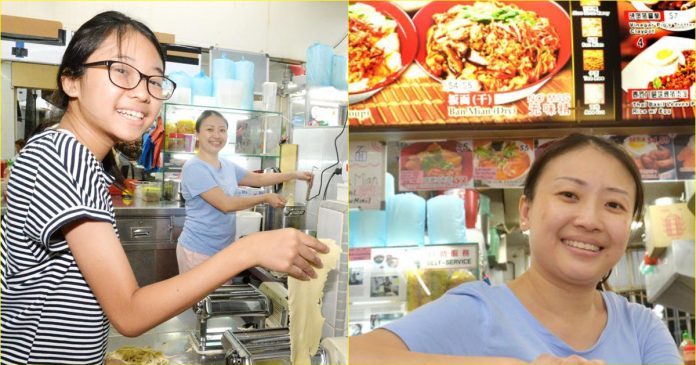 A housewife left devastated and became suicidal after her husband had an affair and wanted to leave, but luckily her daughter saved her in time. “The Pan Mee Noodle you cook is very tasty”, these simple words from her daughter cheered her up. She decided to pull herself together, later opened a noodle stall, and successfully walked away from her depression.

According to the Singaporean Shin Min Daily News, the 42-year-old Madame Leong opened a Pan Mee noodle stall in Holland Close Block 31 Food Court in October 2015. The business has been doing well, but there was a tragic past behind it.

Madame Leong told reporter that she moved to Singapore from Kuala Lumpur in 2003 after she married her husband, but the marriage was in danger five years ago when her husband had an affair while on business trips abroad, and he later asked her for a divorce.

“I believe I am a good mother and a good wife. I have no other family here, so when he asked me for a divorce, I completely broke down. I felt despair and did not know what to do, so suicidal thoughts grew.”

She recalled that she took the divorce very hard at that time, and once she even stood on a chair and was about to jump off from a building, but her daughter stopped her in time. Her daughter was on her knees and in tears, begged her not to do such foolish things, and at the end managed to talk her out of her suicidal thoughts.

She said even though her daughter felt sad that her father left home, she still kept cheering her up, praised that the Pan Mee noodles she cooked were very tasty, and encouraged her to start selling them.

“These simple words of her woke me up, so I decided to turn my specialty Pan Mee noodles into my means of livelihood and raise my daughter on my own.”

She said cooking Pan Mee noodles is her hobby. Her freshly made noodles and sauce are made according to her mother’s recipes, and the soup base is made from yellow soy beans and anchovies cooked for about two hours.

As her business grew, she expanded the stall size in March and extended the operating hour, where the closing time was extended from 4pm to 8pm.

“My life is like riding a roller-coaster with ups and downs, but I am determined to be a good role model for my daughter and stay strong.”

Initially Madame Leong had no money to open a stall, so she made Pan Mee noodles at home and sold them door to door.

She recalled that she used a glass bottle to work the dough and a kitchen knife to cut them into noodles at home. The whole process was time-consuming but to earn her living she had no complaints.

At that time, she also worked in a food stall and a cake shop to gain experience.

She said her ex-husband pays a monthly alimony of 3,000 SGD, but after rent and other living expenses there is little left. Since it cost at least 5,000 SGD to open a stall, she worked hard to save money to realise her dream.

Madame Leong is planning to crowdfund for a shop and hopes to lend a helping hand to other single mothers.

Madame Leong said because of her own experience she now understands the difficulties of being a single mother, thus she hopes to open a shop and let single mothers or low-income earners operate their own stalls so that they can improve their living conditions.

“Right now, I do not have enough capital, so I plan to set up a crowdfunding campaign online to raise at least 60,000 SGD”

“I am gratified for the filial piety of my daughter and she is my motivation to keep moving forward”.