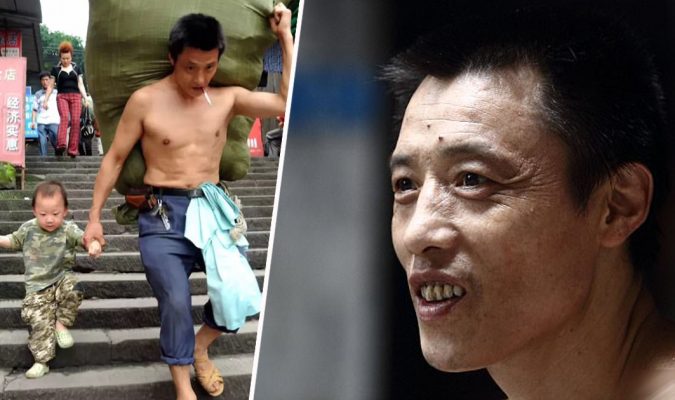 A father’s love is often subtle but it is as important as a mother’s love. And as a picture is worth a thousand words, one picture that was shared on social media has won the hearts of million people in the world.

The picture portrays a father’s love towards his son when he carried a large bag of goods with one hand, so that he could use his other hand to hold his toddler son who was going down the stairs.

Ran Guanghui is a market porter in south-west China and has made many people touched by his simple act towards his adorable son.

The picture is believed to be taken by a Chinese reporter in Chongqing seven years ago. However it was spread widely on Chinese social media last week in conjunction of Father’s Day.

During that time, Mr. Ran was 41 years old and his son, Ran Junchao was three. His wife had to deal with other work hence resulting in him taking his son to his work.

The picture was beautifully captured by the reporter as Mr. Ran was heading down the stairs while carrying a bag weighing around 100kg (220lbs) and having his son followed him. However, his son was still little that it made him hard to follow his father’s step walking down the stairs. Noticing how his son struggled while coming down, he used his strength to carry the sack with one hand, so that he could hold his son using his other hand.

Chongqing is a major city in southwest China with around 30 million residents and Mr. Ran is one of the porters who have been working there for a long time meanwhile his wife works in a small restaurant.

Both he and his wife are from the rural parts of Chongqing and they moved to the city centre to gain a better income for a stable life together with their son that they could look after him.

Xu Kangping, the journalist who took the picture told MailOnline: “I remember the day when I took the picture clearly. It was June 20, 2010. The flight of stairs was long and the father was carrying such a heavy bag.”

Amazed with Mr. Ran’s strong determination of working, Mr. Xu added, “That was not an easy trip. However, the father would have to climb up and down the stairs about 20 times a day with goods in order to make a living.”

Mr. Xu also mentioned: “Mr. Ran is one of the most ordinary labourers in China. However, what’s extraordinary of him is his genuine and great love for his son under the most difficult circumstances.”

“As a father, I would never complain no matter how busy and tiring my work is”, Mr Ran said.

He even said that he was willing to work for another 20 years to create a comfortable life for his son.

And now Mr. Ran who has turned 48 is still working there as a porter earning some 250 yuan (USD38) a day by hard labour.

He works 365 days a year except during the Chinese New Year as all the markets and shops will be closed.

Earlier this year, he managed to save 400,000 (USD61,000)yuan and even bought a flat in Chongqing so that his wife and his son are able to live comfortably.

However, as his age increases, he can easily become tired and carrying heavy sacks may become harder for him. He suffered from tinnitus in 2015 and had his ear checked by the expert. He then prescribed a traditional Chinese medicine given by the doctor after examining him in the same year.

Mr. Ran however never complains, as he has always wanted the best for his son thus making him work even harder each and every day without regrets.

A Mother of 12 Children Has Been Pregnant On and Off for 17 Years, and Her Husband Still Wants More Babies

Woman caught on camera shamelessly faking her accident in bid to...