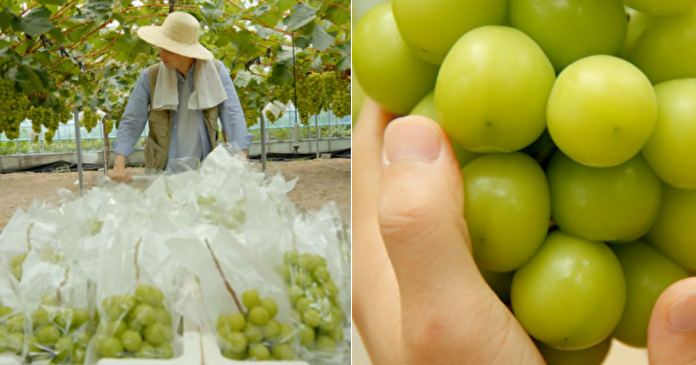 The Sunshine Rose Grapes, also known as Shine Muscat, are produced in South Korea. The grapes are cultured with strict quality control. One bunch of grapes is 700g. After grouping, only around 45 or fewer grapes are usually left. Each grape should be of good quality and should weigh 14 to 17g. The Shine Muscat grapes are highly patronized and loved by consumers around the world.

The European-type grape was cross-developed in 2006 by the Nippon Grape Research Institute. The Shine Muscat grapes are yellow-green in color, thin-skinned, firm, sweet and juicy, and have a charming rose aroma. Although they were initially developed in Japan, it was when they started producing in South Korea have they become more productive and popular these past years and have increased more in volume. Eventually, they have exported to 21 countries worldwide. 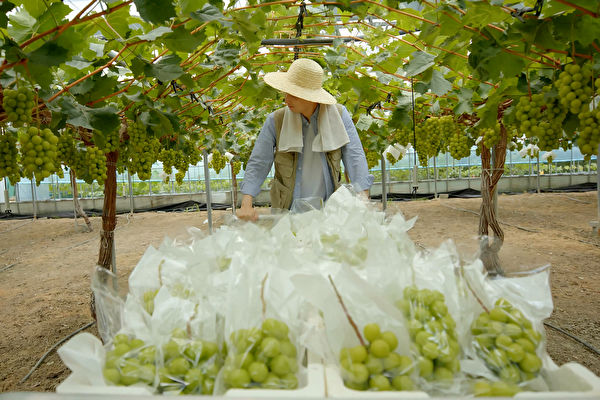 Although these past years were full of tribulations during the production of Sunshine Rose Grapes in Korea, they have developed more and started booming. Consumers grew in numbers with the help of Chairman Hwang Yee-chang of Korea Grape Export United Co., Ltd., who made contributions in secret. In an interview with local reporters, he told them the story of how Shine Muscat developed from taking roots in Korea to enabling exports around the world. Consumers were reported to have highly patronized the grapes since.

Chairman Hwang Yee-chang revealed in an interview that when Shine Muscat was first developed in Japan, it did not gain popularity among the locals. Only when the grapes were produced in Korea were they finally recognized in Japan. Initially, there were 5 grape varieties in Korea, and the production base was shrinking. Local farmers were eager to introduce a new variety to develop for more productivity and earn more for a living. When Shine Muscat was introduced, production began, and planting areas were expanded, accelerating localization within a few short years. South Korea and Chile signed an FTA that opened imports of foreign grapes.

Chairman Hwang Yee-chang said: “The sunshine rose variety was originally developed in Japan, and the Japanese registered variety was soon introduced to South Korea. After another 6-7 years of research in South Korea, the systematic cultivation method was provided to Korean farmers in 2013.”

“In the beginning, it felt good when a friend brought seedlings imported from Japan. So, I went to a Japanese grape farm to learn how to cultivate. At that time, it was the busiest season for Korean grape growers, from May to July.” When Hwang Yee-chang went to Japan to learn how to plant and develop new varieties of grapes, his wife opposed his decision. He once jokingly said, “It would have been nice if my wife hadn’t kicked me out of the house at that time!”

The Korea Grape Export United Co., Ltd. appointed Hwang Yee-chang as chairman when he was younger to help revive the declining grape industry in South Korea. It took him a year to decide whether to accept the position or decline but accepted it in the end. When Hwang Yee-chang first introduced the Shine Muscat grapes to farmers in South Korea, they were reluctant to start planting. When the production of grapes started booming, they are now pushing for more manufacturing of the Sunshine Rose Grapes. After several years of research, Hwang Yee-chang went back to Korea and trained workers in various farms 4 to 5 times a year.

The Shine Muscat grapes can prevent diseases, have high labor production, excellent storage ability, with sugar content 4Bx higher than ordinary grapes, and with the aroma of roses on every grain, resulting in a high increase in each employee’s income and popularity among Korean consumers.

At present, the ​​Sunshine Rose grape planting area has exceeded 50%, and production volume is sufficient to meet the needs of local consumers. In Korea, grapes are harvested around the Autumn season. Since the prices are highest before the festival begins, farmers have produced and harvested early. This 2022, the Mid-Autumn Festival came earlier, and the quality of the harvested grapes was insufficient which led to a dropping in grape prices compared to previous years.

Farmers resorted to exporting to solve the problem. However, the quality of the grapes varied from each farm, and so were the prices. Chairman Hwang Yee-chang conducted unified management among the farm workers to result in good quality standards for export.

In 2019, Chairman Hwang Yee-chang founded the Korean Grape Export Federation. Making it his primary goal to produce high-quality grapes, he conducted 200 cultivation training every year to ensure the quality and price stability of grapes exported from South Korea. With combined efforts from each farm, the quality of harvested grapes has massively improved, and annual export volume has increased. In 2020, the Korean Grape Export Federation was officially recognized by the Korean Ministry of Agriculture and Food.

Chairman Hwang Yee-chang raised the standards of the products again this year. The sugar content must reach 18Bx, and the weight of each grain should weigh 14 to 17g. Since a special-grade product has been established, each grain is expected to reach a weight of 18g. Each bunch of grapes needs to reach about 700g. to be exported.

The chairman divided the Shine Muscat grapes according to their standards upon harvesting, the First Class and the Second Class. The first-class products are those with a sugar content of 18Bx and fruit weights of 13 to 15g. The products that fall below these descriptions belong to the second class. Products that fail to meet both standards are forbidden to be exported. Chairman Hwang Yee-chang claimed that all grape products exported through the Korean Grape Export Federation carry a unified brand, the K-Grape, and those products that do not have this brand is fake and are not grapes produced in South Korea.

Chairman Hwang Yee-chang said confidently, “The taste of the premium Sunshine Rose grapes exported this year is not inferior to those exported from Japan, but the size and color of the grains are better than those from Japan…” South Korea’s Shine Muscat grapes are exported to 21 countries worldwide, with the trademarks registered in 3 countries annually. The countries that import the most Shine Muscat grapes are Hong Kong, Vietnam, and China.

Chairman Hwang Yee-chang said, “Buyers from various countries like to import Korean grapes because of their high quality. If our products fail to meet the standards, we will never harvest them or export them. Once, the head of the fruit department of SKP Department Store in Beijing, China, came to South Korea and asked to supply Sunshine Roses of the same quality as Japan during the Mid-Autumn Festival, and we agreed at that time. But the Mid-Autumn Festival came earlier that year, and the sugar content of grapes at that time was not high enough. We met the standard, so we rejected their request three times. Our actions have gained the trust of Chinese buyers. Now, after they import our grapes, they are sold out within a day after they are placed on the counter. They are very satisfied with the quality.”

Since the establishment of the Korea Grape Export Co., Ltd. in 2019, the number of exported grapes has increased at the rate of 20-30% annually, making Shine Muscat the star grape export product recognized by the Korean government. As of late, the cooperative has 87 production groups and 2,500 farmers, with 89 companies that assist in exporting high-quality Shine Muscat grapes. For best quality grapes, look for the K-Grape trademark.