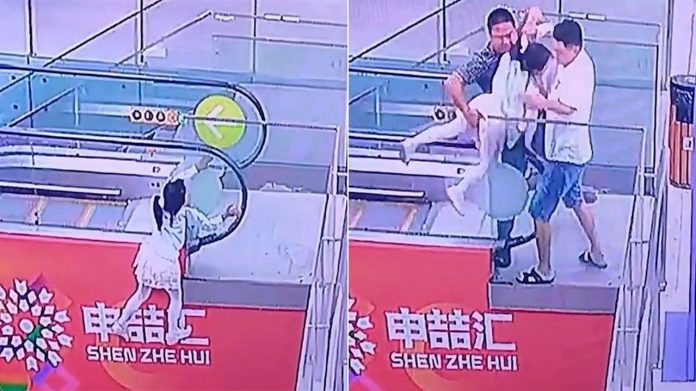 By nature, children are always curious about anything they see. When they are in a place away from home, they start wandering and try to discover anything on their own. Parents should be wary of what their children are doing and where they go. Teenagers are not an exception since this is the age of great curiosity.

Recently, an accident occurred in a mall in Jiading District, Shanghai. A young girl was caught hanging on the rails of an escalator, nearly falling off. It was unknown how she got to the other side of the escalator, though onlookers claimed that when the girl rode the escalator going up, she put both her hands on the rubber rails and went over them. She yelled for help while she hangs on to the rails for her safety.

Hearing her cry, two men came to her rescue. One man held her arm and quickly pulled her up while holding onto her buttocks. Onlookers were able to catch the incident on video and it was posted on the internet. Malicious-minded netizens immediately bashed the man who held her buttocks while pulling her off the edge of the escalator. It turned out that at the spur of the moment, all you can think of is how to save the person in danger. 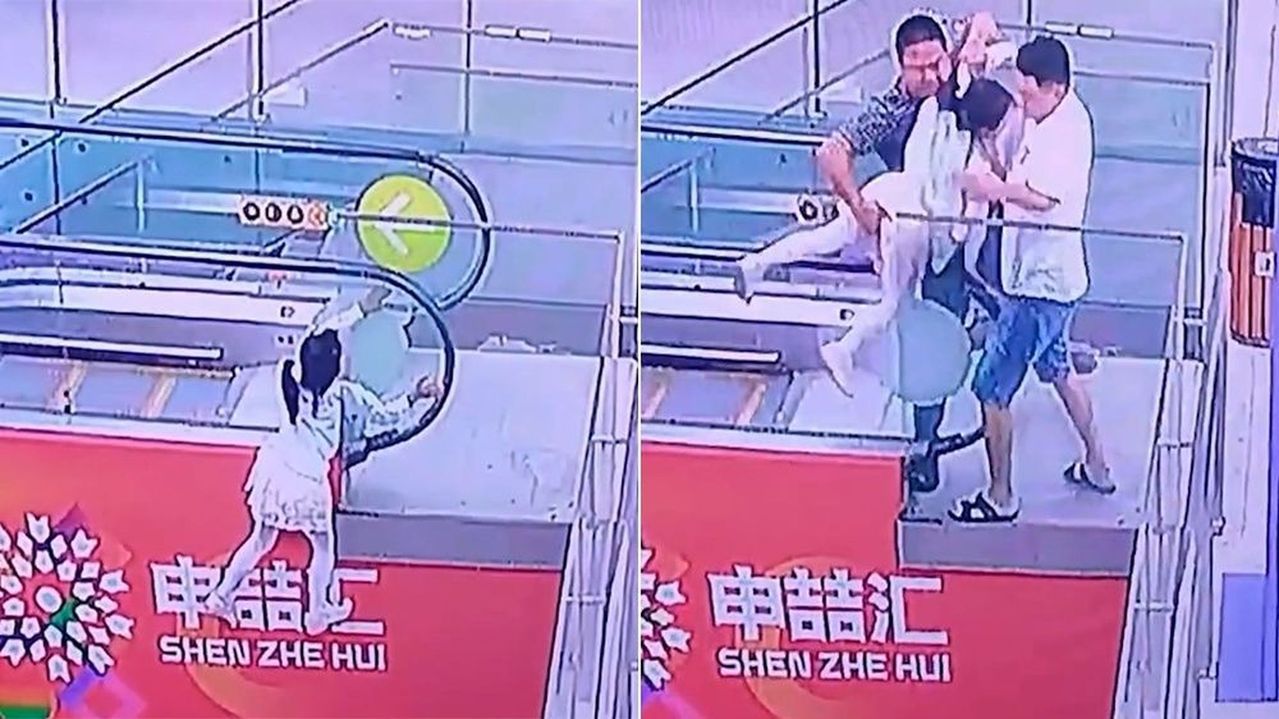 With no malice in mind, you may hold the victim anywhere as long as they can be brought to safety. In this incident, inconsiderate netizens were thinking of malice. The man who saved the young girl was quite relieved when the girl was saved, but worried. He said, “If something like this happens again in the future, I don’t know if I can save them or not.”

According to reports, the man accused of malice by netizens is surnamed Ding, one of the mall’s merchants. He said that when he heard the girl’s cry, he immediately came to her rescue along with his brother. The young girl suffered minor skin injuries and nothing serious. It turned out that the young girl was on her own and with no parents or a guardian to accompany her. She was then turned over to the establishment’s security.

▼ When the video of the incident was shared on the internet, the clip caused some controversy. Some ‘dirty-minded’ netizens claimed that Mr. Ding held the girl on the wrong part of her body. They also claimed that he may have had a ‘bad intention’ while saving her.

Here is the video of the rescue incident:

An aggrieved Mr. Ding should have been infuriated by the bashes, but instead, shunned the comments made by netizens. He calmly said, “At that time, everyone was caught off guard. If the child was not rescued properly, she would fall off.” In dismay, Mr. Ding says that cyberbullying is real and very scary. After reading some of the malicious comments, he is hesitating whether to help again when the time another danger comes. Fortunately, some netizens are on Mr. Ding’s side. On his behalf, they respond to netizens who bash his ‘wrong’ intentions to help people in danger. Strong supporters of Mr. Ding say, “Their mentality is unclean, and everything for them is vulgar.”

Do not hesitate to help a person in danger. Do all you can. What matters most is the life saved, not the vulgar words of inconsiderate people. What goes around, comes around.