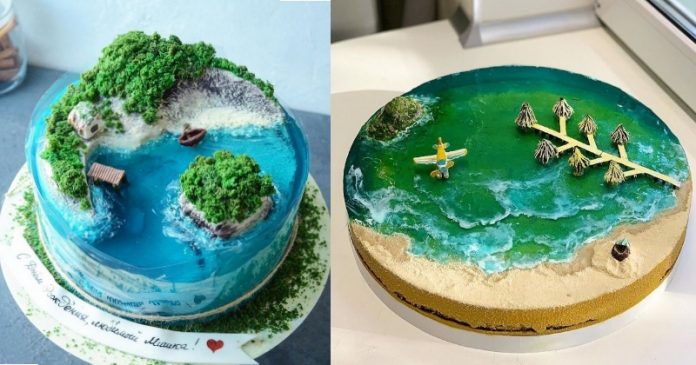 With the rapid advancement of various technologies nowadays, and the skills of people evolving into something more enhanced, even bakers are now trying their hand at making cakes too good not only for display but also delicious enough to eat!

Recently, a foreign baker has made a cake that depicts the exact replica of a small island in the middle of the sea. Even the scenery underwater is perfectly presented. Many people can’t help but exclaim, “It’s so awesome! It’s perfect!”

According to a foreign media report by Brightside, aside from the traditional forms of romantic and dreamy style cakes that people are used to having on special occasions, this cake that perfectly presents the “real landscape of the ocean” not only gives people the illusion like photographs, but even the reefs and the underwater world are very realistic.

Even the schools of fish under the water look alive, just like the beauty of the underwater world you would actually see when snorkeling!

The waves are also perfectly done! Who would have thought that it was a cake and not a photograph…

It’s a resort where you can relax. A haven!

If such a place really exists, it would be very nice to get away and live there for a few days~

The blue water on the cake looks good to cool off from the heat! Everyone, though, is very curious about its taste…

This is how a slice of cake would look like after it is cut.

To be able to make this “deep blue sea” cake, the skills of the baker are too meticulous!

Look at these beautiful underwater landscapes, who would think this is a cake!

The shells under the water are also realistic that people can’t help but wonder “Is this a real cake”?

Such a beautiful cake makes people reluctant to eat it.

People are in awe when they look at this cake with a lighthouse with a hut beside it and imagine if some people would actually live in them. Though the cake with an underwater cave looks edible enough to eat.

For such an exquisite and perfectly done cake, the master baker must have done so much work! You can’t help but admire such a masterpiece!

A Child with Autism Can Produce Landscape Drawings with Just a...