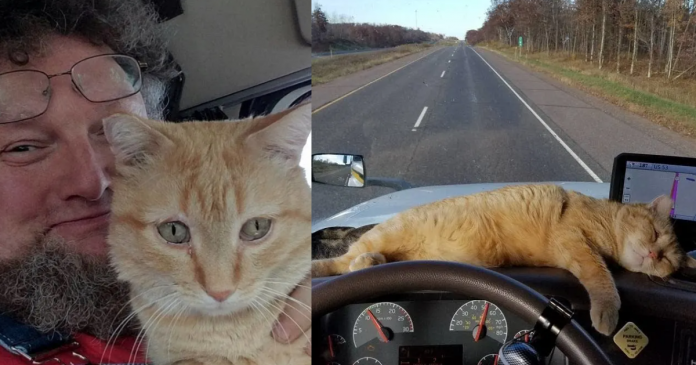 Lone truck driver Paul Robertson from Ohio and his former feline companion, Howie, were traveling buddies. While Paul would drive miles to make deliveries, Howie was always by his side as his companion. Paul loved his job and made sure that he would deliver before the deadline. These travel buddies spent countless days and nights together on the road for years. Sadly, Howie passed in 2017. For several weeks, Paul traveled alone, and driving at night was never easy. Anybody who is an animal lover would know how it feels to lose a beloved pet. Paul was heartbroken. 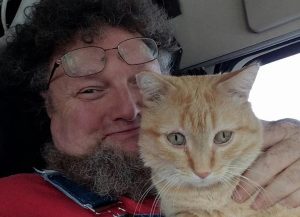 A few weeks passed, and Paul was ready to take in another feline companion. He never closed his doors to the possibility that he could love another cat after Howie’s passing. He found a new perfect travel companion in Percy, a tubby cat he adopted from Twin Cities Animal Rescue. Percy had scars, a missing tooth, and a torn ear, which Paul assumed he fought with a stray cat. Paul fell in love with him despite his flaws. Percy found a “furrr-ever” home.

Time flew fast, and in a blink of an eye, the 2 travel companions were constantly on the road for a year. Paul even created a small “Percy suite” on the passenger seat for him to enjoy the different views outside the window. They were inseparable! 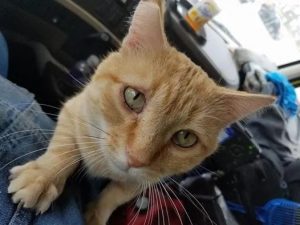 Paul took a lot of photos of Percy and himself and posted them on Facebook. Soon they garnered many followers who enjoyed seeing their travel photos together. “He’s very affectionate and loves to crawl on my lap, up my chest, and then rub cheeks with me,” Paul wrote on Facebook. “He loves to play. He purrs a lot. And of course, he’s a cat: he loves to eat and loves to snooze.”

One cold February day, Paul woke up with the passenger side window opened. Percy was nowhere in sight. Paul knew that the smart cat could open the window when he sees a beautiful bird or anything interesting outside the window. At first, he thought that this was only one of Percy’s usual walks outside wherein he would immediately return when he was called. This time, it was different. After calling his name several times, Percy did not return. Paul started to panic. 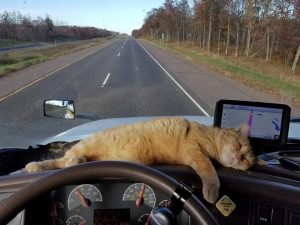 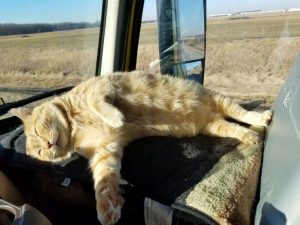 He took Percy’s food bag, shook it, and said, “Percy! Percy Wercy!” Still no response from the feline. He was nowhere to be found! Panicking, Paul relentlessly searched every area of the rest stop. Noticing that the temperature was dropping, and the skies were turning grey, signaling a storm approaching, Paul called for Percy. “It started to rain. It’s freezing, and we’re out there soaking wet, beating the bushes, calling ‘Percy!’” Paul said.

A devastated Paul resorted to Facebook for help, informing their followers of Percy’s disappearance. Paul was overwhelmed by the immediate response of the community. People overseas expressed support online, some called the nearby shelters, and one online supporter came in person to help search for Percy. Nighttime arrived, and still, Percy did not return. After a sleepless night, Paul decided to keep moving and leave the rest stop empty-handed and with a heavy heart.

“I’m a commercial truck driver, and I have a truck full of stuff that’s worth hundreds of thousands of dollars, and I’ve signed on a dotted line saying I will have it delivered by such and such a time,” Paul said. “I don’t have the choice but to stay if I want to. I just felt so low. I suddenly felt like I was abandoning my child.” Not a minute longer, he was on his way. With a broken heart, Paul left the rest stop and traveled on his lonesome. Online, people in the area assured Paul that they will not stop searching until Percy is found. 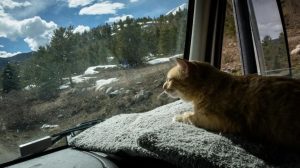 While driving, Paul could only think of the worst thing. Percy may be hungry and alone, shivering from the storm that passed, and unable to find his way back to the truck. But Paul was bound to his duties and had to move along.

After driving 400 miles for 2 deliveries, a miracle happened. Paul was about to return to his truck when a familiar figure crawled out from underneath his truck. At first, Paul thought it was just another stray cat. When it came closer, Paul was speechless. It was Percy covered in truck oil! Paul immediately scooped up the cat and snuggled with him in happiness. 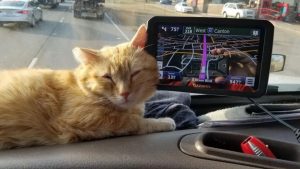 “I suddenly recognize him. He just looks up at me with big eyes, like: ‘Dad?’” said Paul. “I took him into the truck, and we cuddled and snuggled, and he was rubbing his face on me. Oh my gosh, he stunk!” There, sitting in the truck, the 2 travel buddies happily reunited. Percy has never left the truck, after all. He was hiding underneath for 400 miles! Miraculously, Percy survived the long travel and not hurt. He was healthy!

With happiness filling his heart, Paul updated his post on the online community. He showed new photos of Percy and himself. “CALL OFF THE SEARCH!!! PERCY IS OKAY!!!” Paul wrote, thanking everyone for their help and support for both of them. 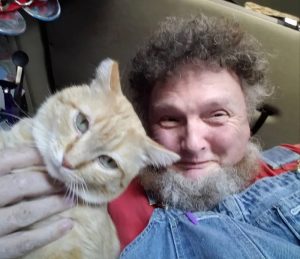 “This little orange furry soul means the world to me. Thank you for caring about him too.” Paul wrote on his update. “The other day, I caught myself laughing at one of his antics, and I thought: ‘It’s nice to live alone sometimes’ cause you can have everything your own way – but I wouldn’t be laughing like this if I were alone.’ Percy is good for my spirit and soul.” Then Paul signed off. This is a reunion their online supporters will remember for a lifetime. Paul and Percy are looking forward to more travels together.

Adorable baby deer thinks logger is his mom and it’s the...