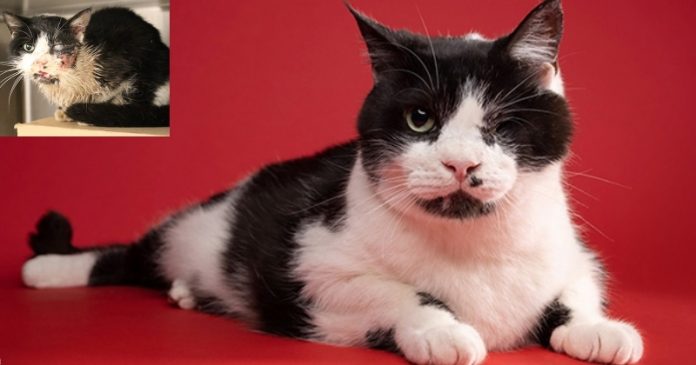 A black and white pet cat was accidentally hit by a car in Florida. The cat was dying when his owner found him and assuming the cat was dead, he decided to bury it. What happened next was unexpected.

After 5 days of being buried, the cat walked home alone with a severe wound on his face. Once treated, the cat miraculously survived. Due to the scars left on its face, the cat was called “The Zombie Cat”.

Bart, a black and white cat in Tampa, Florida, USA, was hit by a car in 2015. When his owner, Ellis Hutson, assumed that the cat had no more signs of life, he decided to bury him near his home.

Unexpectedly, after 5 days the cat managed to crawl out of the grave and went home to ask for food. Hutson was quite shocked to see the cat return. Bart was seriously injured, so he took him to the hospital for treatment.

Veterinarians at the Animal Health Center found that Bart suffered a full-body injury and a broken lower jaw bone. His body is very weak, and his left eye was protruding out.

It took 3 hours to deal with his injuries and after several major surgeries, Bart had a strong will to survive, but the cost of post-operative treatment was so expensive. The owner did not have the money to pay, hence leaving his cat.

After Bert recovered, Hutson regretted leaving him and he wanted to take the cat back, leaving the staff at the animal shelter very stunned. Eventually, the case was taken to court and after 20 months of legal process, the animal shelter successfully acquired Bart’s ownership and was adopted by Valerie, an employee of the shelter.

Recently, the US media “TODAT” visited Valerie and took the latest photo of Bart. Valerie expressed her gratitude to the community for their help at the time and provided the cost of Bart’s treatment and rehabilitation.

This is a very difficult experience. It is a miracle to be alive again. But when Bart first arrived at his new home, there were already 3 cats, and Valerie was worried that her pet cats would not accept Bart. Her worries disappeared when one of the cats, Max, bent down to lick him, a form of welcoming Bart.

Bart gets along with the other cats and likes to play with them. Despite losing one eye, his body is very strong.

Valerie says that Bart will always try to touch the other cats even when his body is still in the recovery phase.

“This is the feeling of being loved and to feel like I always have a friend around. Bart has a very good personality, and he is the first among all of them to walk to the door and welcome his host back at any time,” said Valerie.

Here is the video of Bart’s adoption: