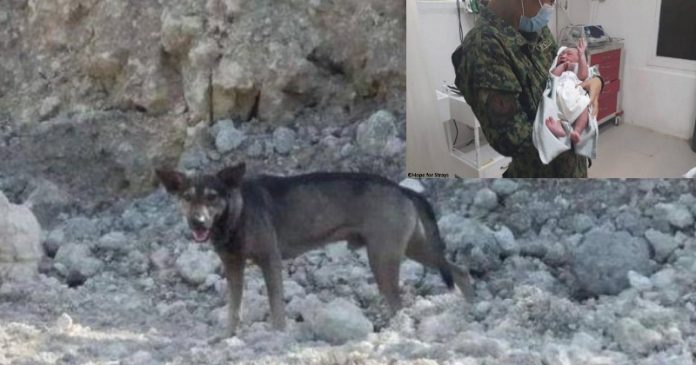 All animal lovers will never tire of saying that dogs are the smartest and most faithful animals on the planet, hence being called Man’s Best Friend. In repeated but various stories, we hear of their courageous actions and become heroes to protect those they love the most.

However, their protective instincts are not limited only to their family or favorite people, but also to those in need and who are vulnerable. They do their best to seek the attention of others for help and be a part of the solution.

This is what happened recently in the town of Sibonga, Magcagong, Philippines, when a puppy found an aband0ned baby in a landfill.

The dog, knowing that he needed to ask for help, ran out to the nearest road and barked to alert the passers-by. It was not until a passing motorcyclist realized that the puppy was insistently barking at him and came to see what was going on.

The man has noticed that the dog was not aggressive, but concerned by the sound of his barking, so he allowed himself to be guided by the dog on what was going on.

To his surprise, he found a baby wrapped in a towel. Junrell Fuentes Revilla, the man who answered the dog’s call, took the baby in his arms and moved them to the nearest hospital.

As reported by the local police, at the time of discovery, the baby still had the umbilical cord and placenta.

Faced with the heartbreaking scene, Revilla went to the local police department to file the complaint about the newborn’s aband0nment.

The man emphasized that the puppy did not stop barking at him until he got his attention, an action that ended up saving the life of the helpless baby.

The authorities have opened an investigation to locate those responsible for such a cruel act, for the time being, the baby is under the care of the social workers of the city.

For his part, it was discovered that the brave puppy has a family, only shortly after his heroic action was made known and was rewarded with plenty of food.

The Hope for Strays organization in Cebu unveiled through their Facebook page the valuable contribution made by Blacky and the family who educated him.

They brought him 10 kilos of food for the brave puppy, plus 2 sacks of rice and other supplies.

The organization emphasized that they made the gesture of returning the favor to the incredible people for educating such a brave and friendly puppy.

There is no doubt that puppies are the best example of compassion and kindness, and we are glad to know that this story has a happy ending.

Not all heroes have a cape, the real ones have four legs and melt our hearts with love, and their loyalty. Share this story on your social media pages and fill every corner of the world with good news.

Restaurant goes viral online after customer posts a photo of their...