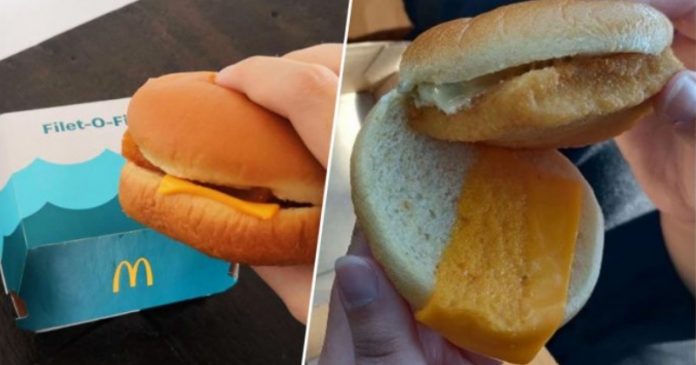 Cheese is a popular topping for various types of food. There are also a handful of cheese enthusiasts willing to pay more to get extra slices or an overflow of cheese in their meal. So, what would you think if you bought a Filet-O-Fish burger at McDonald’s (McD) and found the employee put only half a slice of cheese on the sandwich?

Take a look at the photo below.

Recently on Facebook, a user posted a shout-out to express her dissatisfaction with McDonald’s Malaysia over the issue.

“Today is the first time I ordered Filet-O-Fish after so long. So, since when is the cheese cut in half?”

Not only in Malaysia, but a few years ago an American actor also voiced his opinion when he found that the fish burger he enjoyed only had half a piece of cheese.

“@McDonalds, are you trying to save money by putting half the cheese on a Filet-O-Fish burger?”

Fact: The Filet-o-Fish burger was indeed created to contain only half a piece of cheese to maintain the freshness of the taste of the fish filling. According to QSR Magazine, since this burger was made on a regular McD menu in 1962, not much has changed. The McD still maintains a recipe that uses steamed bread, tartar sauce, half a slice of cheese, and even a slice of fish fillet.

The only change made was on the taste of the fish fillets as McD always tried to produce fish fillets using different types of fish.

As evidence, Julie Caturano, who is a McD spokesperson, also confirmed the matter in an interview with the Journal Star.

“It has been like this since the beginning. If you’re thinking about a cheeseburger, it has to be really cheesy. But with fish, only half is enough.”

She added that the cheese has a strong taste, and if placed too much, it will sink the taste of the fish.

McD Canada also confirmed this point by saying that, “Putting cheese on fish is a bold act. In Italian cuisine, cheese is not allowed to be placed on fish or seafood. But sometimes we have to take risks and hope customers like it.”

So, don’t get me wrong again. Only half of the cheese is placed to maintain the quality and taste of the food, rather than to save money. If you also want a piece of cheese, buy Double Filet-O-Fish.

Weight Loss Motivator Who Went from 220kgs. to 78kgs. is Hospitalized...

A 23-year-old Drunk and Heartbroken Woman Cries on the Roadside when...