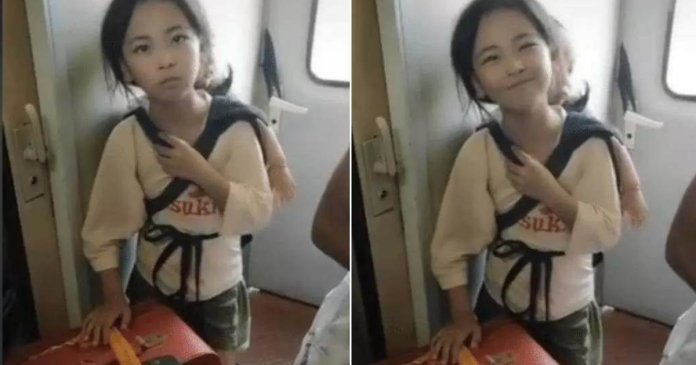 Children traveling on their own have always been distressing to many people. Seeing the children without the supervision of an adult concern many citizens. Fortunate children who still have their grandparents resort to them when their parents are not available.

Photos of a female child carrying her brother on her back have become viral on the internet. Traveling alone did not seem to bother her. With her brother secured on her back and a heavy suitcase in tow, she still managed to smile for a photo that touched netizens’ hearts.

A 7-year-old girl carrying her younger brother, who appeared to be less than a year old, on her back and holding on to a heavy suitcase attracted people’s attention when photos went viral on the internet. She was dressed in simple clothes, and her hair was not organized. She held on to a suitcase half her height and was riding a slow train from Nanjing to Chengdu.

Unfortunately, there seem to be no seat available for the traveling children, and the patient little girl was standing in the aisle. A passenger asked the little girl why they were traveling without adult supervision. It turns out that they visited their parents in Nanjing. They were not available to take the children home, hence the little girl took the responsibility to travel home with her brother in tow. The passenger smiled sweetly at the little girl.

Passengers on the train admired the little girl, took photos of her, and uploaded them on the internet. Unexpectedly, they became viral! The beautiful little girl even managed to smile for the photos showing no fear of traveling alone. Her innocent face only showed a strong personality and a responsible older sister.

This young girl has taken the responsibility for quite some time. She has taken good care of her brother when their parents are not around. At a very young age, she may have lived in poverty, but she is very optimistic in life. Various reactions from netizens range from worry to admiration. Everyone wishes them all the best in life.