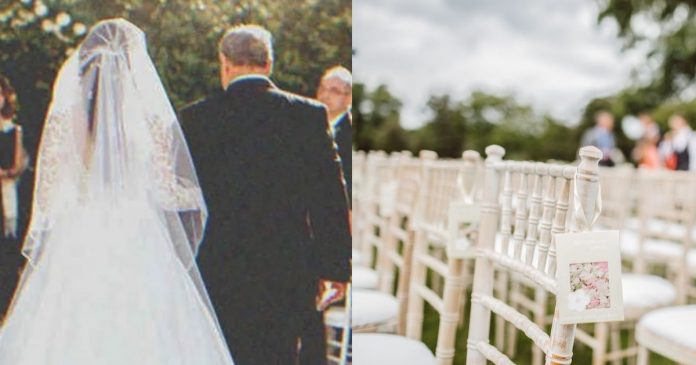 Jennifer gave birth to Rowley at the age of 16. Even at a young age, she never regretted having a son. He was the light of her life. Unfortunately, at a very young age of 18, Rowley, who loved riding motorcycles, met an accident in Texas and died immediately. He was an organ donor and has helped many people because of this. For Jennifer, it was an inspiration to know that Rowley still lives through other people.

While Jennifer was still grieving, she met John. He supported her through her ordeal until she moved on. She believed that John was the right man for her and wished that Rowley could have met him. With John in Jennifer’s life, she no longer felt alone.

After 2 years, Jennifer and John decided to marry. She wished that Rowley was there to attend, so one of her friends suggested leaving an empty seat at her wedding ceremony and reception. For Jennifer, it was a splendid idea. She explained the idea to her fiancé. “I think we’ll leave this seat at the front for Rowley. What do you think, John?” she asked.

John immediately agreed with her idea since he has helped her through the days when she was still grieving. “That sounds great, honey. Let’s do that. You can put him next to your parents since that’s where he would be anyway,” John responded. Jennifer smiled and stared at the man she has fallen in love with.

On the day of her wedding, Jennifer felt a wave of emotions while she got ready for her special day. Although her family and close friends were present at the venue, she still felt a little emptiness since Rowley was not physically present. Tears filled her eyes many times at the thought of him, but she knew he would be there in spirit, sitting on the empty chair.

When the bridal march played, she walked the aisle with her father. Holding his arm, she smiled at John who was waiting for her at the altar. As she walked, she noticed someone sitting at Rowley’s empty seat. She knew she wasn’t imagining what she saw. A young man in his mid-20s was sitting on Rowley’s seat! Jennifer did not hesitate to react and ask her father.

“Dad, who is that?” Jennifer asked her father, trying to be discreet. “Do you know who he is?”

Jennifer did not understand why her father responded differently. When they reached the altar, she tried to focus on the wedding ceremony to not ruin the event. She kept on glancing at the seat and was trying to conceal her anger at the young boy who occupied Rowley’s seat.

The ceremony went well, regardless. Jennifer and John said their vows, the minister carried on with the blessings, and the crowd cheered at the end when they kissed.

After the ceremony, cheers from family and friends greeted the newlyweds when they walked down the aisle. Cameras were flashing everywhere to take souvenir photos of them. As soon as they reached the bridal car, Jennifer could no longer contain her curiosity. She turned to her husband and asked, “John, do you know who was sitting on Rowley’s spot? My dad didn’t want to answer me.” John answered her, but it did not seem to convince Jennifer. “Yes, I do know, my love. But I want to introduce you to him at the reception.”

Jennifer begged John to tell her. “John, you know how important that spot was for me today. I worried about that all throughout the ceremony. Please, just tell me!”

John could not resist his wife’s persistent begging. Finally, he responded, “Okay, okay. His name is Dave, and darling, he was the recipient of Rowley’s heart. Honey, you literally had your son’s heart right on the spot you planned for him.” Jennifer’s eyes filled with tears, and were too shocked to talk.

A few minutes later, Jennifer managed to ask while catching her breath, “Are you serious?”

Calmly, John responded, “Yes, darling. It was my surprise for you, and Dave is dying to meet you. His mother is also here. I wanted you to have a part of Rowley in the wedding, and this is the best I could do.” John continued to explain some more of the details, and Jennifer was careful not to cry so as not to smear her make-up. Instead, she hugged her husband and thought that he was the perfect one for her. “My make-up is going to be ruined, but I’m so glad I know now!”

John introduced her to Dave when they arrived at the reception, who kept expressing his gratefulness. His mother gave her the biggest hug and thanked her with tears in her eyes. “I don’t know how to thank you for your sacrifice. But I’ll be grateful forever!”

“Thank you for coming!” Jennifer said, her tears smearing her make-up.

While everyone was celebrating at the reception, Dave made Jennifer listen to his heartbeat through a stethoscope. She cried when she heard his heartbeat, feeling Rowley’s presence through this. Surely, this was a day to celebrate. Rowley may not be physically present, but his memory will always be alive through Dave’s heartbeat. Dave and Jennifer kept in touch through the years and were very happy that her son has helped another young man in need through organ donation.

Donating your organs is one way to keep your legacy alive. It is one of the best decisions a person could make to help anyone in need. Many people around the world require transplants, and a donor is considered a hero to them. John made the best decision to introduce Dave to Jennifer. In him, Rowley is alive. What John gave Jennifer on their wedding day is the most invaluable gift she will treasure for life.

Woman goes viral for coating her car with cow dung to...