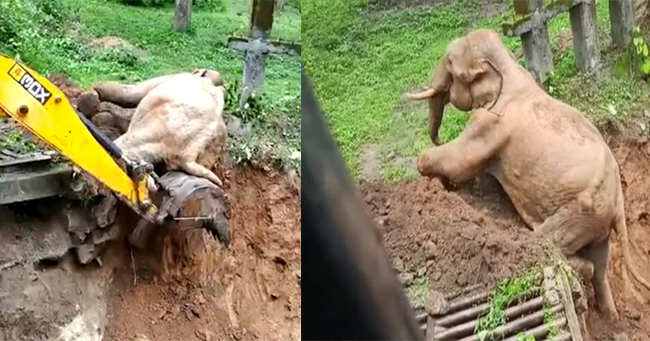 Forest officials rescued an elephant that fell into a muddy ditch in Siddapura village in Coorg district earlier this week and the video of the rescue is now making rounds of the internet.

The baby elephant trapped in a mud puddle managed to escape with the help of an excavator. He touched the excavator with his forehead, a small gesture to say thank you. He then stepped into the forest to the cheers of the people around him.

This friendly human-animal partnership was filmed entirely by a member of the forestry staff, and the video quickly became popular on Twitter.

According to the Indian Express, on Wednesday (19 May) in a village called Siddapura in the Indian state of Karnataka, a baby elephant accidentally fell into a swamp.

It can be seen from the video that he was trying to crawl out with his limbs, though the mud is too slippery, the elephant cannot climb onto dry ground, he has tried his best but failed.

When it finally reached up the ground, the elephant ran forward, bowed, and pressed its forehead against the excavator bucket. It turned out that the elephant expressed his gratitude for this.

After expressing his gratitude, the little elephant ran amidst the cheers of the crowd, and happily stepped into the depths of the forest, and caught up with his friends.

Sudha Ramen, the deputy manager of the State Forestry Department who shot this video, told Newsweek that the gesture the baby elephant made means “thank you.”

Raman says there are not many outsiders at the rescue site.

“When this kind of rescue operation is carried out in a crowded environment, the animals usually show panic and may become aggressive due to the presence of humans or excessive noise around them,” Raman explains.

Raman also stated that the operation can only be carried out in the presence of forestry officers and veterinarians too, as the excavator drivers will have their professional guidance.

Raman reveals that excavators are used to repelling wild animals from the forest when they enter villages or residential areas and protect humans when they try to attack them.

“Using this tool will not hurt the animals, but will trigger them to leave,” said Raman.

Here is the post that went viral on Twitter and the comments from citizens who appreciated what the people have done to help the poor elephant:

According to data provided by the World Wildlife Fund (WWF), there are currently less than 50,000 elephants left in Asia, and the number of their species has been declining since the last century.