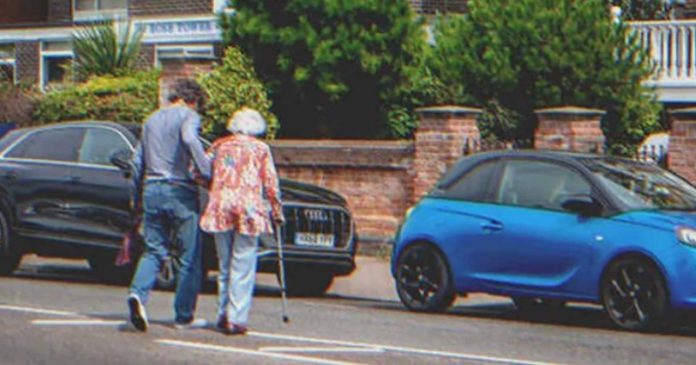 People always say, “A little kindness goes a long, long way.” They are not wrong. A story of a man who simply helped an elderly woman cross the street was rewarded more than he expected. He was genuinely not expecting anything in return. When the elderly woman suddenly passed away, she gave him a token of her appreciation… something bigger than what he expected.

A single father named George Tandy passes a posh building daily on his way to work. The building seemed to be from the mid-1930s with a carpeted hallway and a doorman, and this is the establishment he notices going to the subway station every morning at 8:00.

About 100 meters from the building is a crosswalk where George passes to get to the subway station. There, he met Doris Danquist for the first time. The elderly woman was trying to cross the street, but fast cars were speeding past, and she hesitated. George approached her and noticed the tears in her eyes and the worried expression on her face.

“Excuse me. Are you alright?” George asked with concern. Doris nodded and replied, “I’m fine. It’s just… I can’t seem to cross! Those cars… They’re so fast! I was afraid I would get hit.”

“Well, how about I help you?” George offered. “You take my arm, and we’ll cross together, okay?”

“That would be great! Thank you!” Doris gratefully accepted and wiped her tears. When she smiled at George, he had a glimpse of what she looked like when she was younger and stronger. Taking the woman’s arm and helping her cross the street, Doris kissed George on the cheek when they arrived at the other side.

“Thank you, young man! What’s your name?” Doris asked with a smile, and George replied, “I’m George, George Tandy. And you?”

“I’m Doris Danquist. Nice to meet you,” the elderly woman said. “It’s rare to meet real men these days. Your wife is a lucky woman!” Hearing what the woman said, George’s smile faded and turned to sadness. He replied, “My wife died a year ago. It’s not easy…”

“Yes,” George replied. “Three. Two women and one boy. They are my happiness. If it weren’t for them, my life wouldn’t be worth living.” Doris replied, “I know how you feel. I lost my Albert five years ago. My children and grandchildren keep me going.”

“Well, Mrs. Danquist, I’d love to chat some more, but I have to run or I’ll be late for work!” George said with a smile. He waved at Doris and ran to the subway.

Two days later, George saw Doris again at the foot of the pedestrian lane, waiting to cross. With a smile, he called out, “Hey, Mrs. Danquist! Want to cross with me?” Doris turned and smiled when she saw George. “George! You are a sight for sore eyes. I’ll be happy! And please, call me Doris!”

Taking the elderly woman’s arm, together they crossed the street. “Listen, Doris, I’m here every morning around this hour. If you wait for me, I will get you across!” Doris’ face lit up and she replied, “Well! It’s been a long time since a young man has dated me, and he’s so handsome!”

George laughed. “And I’ve never come out with such a charming and straightforward seduction!”

From then on, George and Doris crossed the street together in the morning before George went to work. After a few days, when they felt more comfortable conversing with each other, George finally confided in Doris and asked for parenting advice.

George finally admitted that it was difficult being an only parent. “Because of my wife’s medical expenses, I had to sell the car and the house. I can’t take my daughter to soccer practice like other dads. It’s not easy to make them understand…”

“Give them time,” Doris said comfortingly. “They will see how much you love them and that you always do your best.” Being enlightened by their conversations and Doris’ wisdom, this became the highlight of George’s day.

However, George did not see Doris for more than a week in the following days. He remembered that she visits her friends 3 times a week, though he has not seen her in the days that passed. Did something happen to her? George started to worry.

The next day, George went to the building where Doris lives and asked the doorman. “Excuse me. I’m a friend of Mrs. Danquist, and I am worried about her. I haven’t seen her in a long time…” Looking very sad, the doorman replied, “Oh! Mrs. Danquist died. It was very sudden.”

George felt a coldness pass through him and felt devastated. “But… Last week, she was fine!” With a sigh, the doorman replied, “It was a big surprise for all of us, especially the family. By the way, what’s your name?”

Still bewildered by what he has learned, he replied, “George Tandy. Why do you ask?”

The doorman handed a card to George and said, “Oh! Mrs. Danquist’s lawyer asked if I knew George Tandy and how to contact him. Apparently, Mrs. Danquist left you a legacy.” Surprised, George asked, “For me? But why?”

When Doris Danquist’s lawyer contacted George after a few weeks, he discovered that Doris left him her late husband’s Lincoln car! “Mrs. Danquist said you’d understand,” said the lawyer, handing George the keys and papers. With tears of gratefulness, George accepted. “I accept. Mrs. Danquist is a kind and wonderful soul!” he said.

Acts of Random Kindness (ARK) are often rewarded. When you receive it, pay it forward. It is bound to come back to you again in some ways, maybe even a thousand times more. There are still people who help others through life’s difficulties. Just as George helped Doris cross the street, she returned the favor by providing him with a car that he needed but could not afford. George was lucky to receive such an inheritance of something that was no longer useful to someone but a treasure to him.