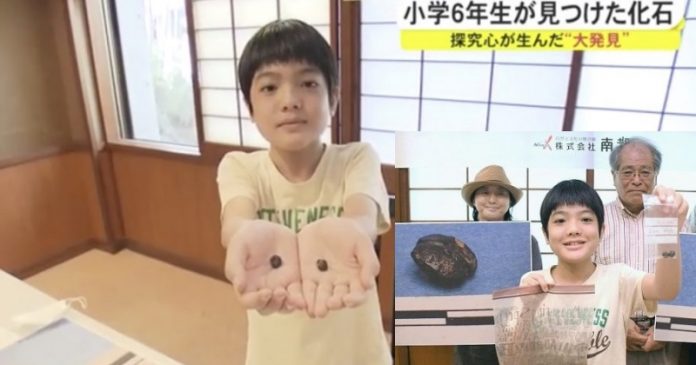 A great discovery was revealed in June when a young boy in the 6th grade found 2 small stones he thought were Manganese. After being appraised in a museum, what he discovered was a historic breakthrough. Honorary directors of the museum called him “The boy with the ‘Eagle Eye’.”

In June, an 11-year-old boy named Makoto Hitani and his 52-year-old father Kei, went for a walk. In a grassy area in Senaba, Makoto picked up 2 stones that looked shiny but oddly shaped. The curious boy and his father immediately went to the Okinawa Stone Culture Museum and had them appraised. It turned out that the 2 stones were “ammonite fossils” from the Paleozoic Era 400 million years ago! The Honorary Director of the Okinawa Stone Culture Museum praised the little boy and said he had a ‘Good Vision’.

▼ Makoto Hitani is a 6th grader in the Wataru Keiji Elementary School. Since he was a child, he was very interested in various unique-looking stones. He has a collection and studies facts behind the stones he discovers. The stones he has found lately were 1.2 centimeters long, and have a slight black color.

▼ Makoto Hitani and his father hurried to the museum and handed the stones to Itsuro Ojo, Honorary Director of the museum. After a thorough appraisal, it was finally revealed that the stones were ammonite fossils from the Paleozoic Era. Yoshiro Oshiro, the curator contacted by Director Ojo, said the fossils that are usually found in Okinawa belong to the Mesozoic era. However, the fossils discovered by Hitani appeared to be older, possibly from the Paleozoic Devonian period.

▼ Director Ojo says that the fossils discovered by Hitani were produced in Morocco, North Africa. The site where the little boy found them has relocated to create a residential area, though it used to be the site of the Yomitani Auxiliary Airfield. Honorary Director Ojo theorized that the fossils may have been brought in by U.S. soldiers and their companions from another country.

“At first, I thought it was manganese with an unusual shape. I thought it wasn’t unusual, so I was only surprised,” Hitani recalls saying, “I am happy with the sense of accomplishment when I discover something difficult to find.”

On June 20, the museum director held a press conference at the Okinawa World in Tamaki, Nanjo City, to introduce the fossils that were discovered. Honorary Director Itsuro Ojo said, “I was able to recognize it because it was the eyes of a child who sees things carefully. I would like to call him ‘Eagle Eye.’”

The ammonite fossils are now on display at the Okinawa Stone Culture Museum.

Spectacular “pillars of light” appear in the night sky of Philippines...