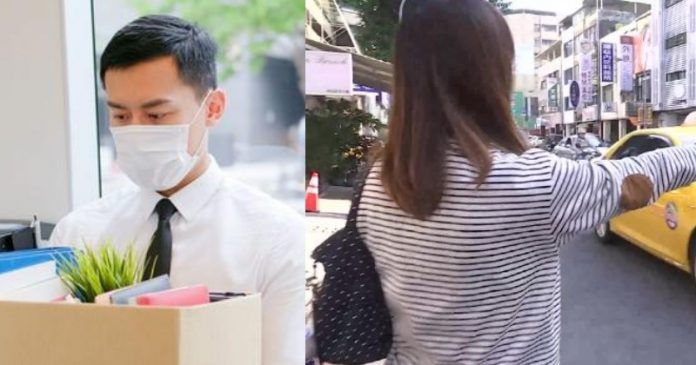 Since the pandemic and the worldwide lockdown have taken effect, many people have lost their jobs. Many people have resorted to social media to share their experiences and how they reacted to losing their careers. Most of the reactions ranged from anxiety to hiding their guilt from their family. Such is a man who lost his job in the office and resorted to being a taxi driver, which he concealed from his wife due to embarrassment.

According to a TVBS News report, a man from Taiwan shared his experience when he lost his job 2 years ago due to the pandemic lockdown and the company’s downsizing of the number of employees. The man said on the Facebook group, ●【爆廢公社】● (Demolition Commune) that he is unable to accept his termination from the company. He has a child entering Primary school and the family still has a car loan to pay. At that instant, he fell into despair.

However, the man did not drown himself in self-pity. He quietly took all the money he saved for years, bought a second-hand car, and transformed it into a taxi for business. The man did not want his pregnant wife to worry about his job termination, so he pretended to go to work every day riding a bicycle. He would then park the bicycle where he hid his taxi and start his route for the day.

However, income is scarce when there are not many customers during non-rush hours. If he wanted to earn more income, he would have to go overtime. After a few months, his wife was starting to be suspicious, assuming that there was something wrong. She began to ask why his working hours have changed and he started to work overtime more often. Her husband made various excuses about his job in the office and claimed that he may need to continue working overtime.

Two months after he was terminated from his job, he could only earn less than US$2,980.00 (about Chinese ¥20,000) a month. Due to lack of income, he resorted to loans from his father and hoped that his parents would keep it a secret from his wife, and in return, they told him not to worry. He started joining a team of taxi drivers in a company, and his income started to stabilize. However, if he wanted to earn enough, he will have to work for 12 hours every day. He agreed and this made him rarely home.

Yearly, he promised his children that he would take them to Kenting National Park for the Mid-Autumn Festival. Though last year, he was surprised to receive a notice from the taxi dealer before the holiday. He was booked to send a customer to Pingtung, Taiwan. He regretfully told his wife and children that he had to work overtime during the holiday and that their visit to the park will be canceled. He felt sad for his children, though he assured them that he would earn more money to have a vacation with them someday. On the day of the Mid-Autumn Festival, he arrived at the place designated by the customer and discovered that it was less than 500 meters from his house. He waited for 5 minutes. When he heard the taxi door open, he turned his head to welcome the customer. He was surprised! The people who entered were none other than his parents, wife, and children!

He would not look straight at his wife’s eyes and could not say a single word. He felt very embarrassed for hiding his job for so long and not admitting that he had a different line of work. He felt that his secret went down the drain. At that instant, his wife said: “Couples don’t need to keep secrets from each other. Your life doesn’t have to be rich. You drive and work hard every day for me and our children, and my father told me that I will give you 3 days off for the Mid-Autumn Festival, so let’s go! Seaside in Kenting near Taipei has the jellyfish float that you promised your children for.” Her kind words and understanding relieved him, and all the hard work he did paid off.

After the article was shared in the group, the post went viral, garnering multiple reactions from netizens who were touched by the story. Here are some of the comments:

“This is the perfect couple! They have mutual understanding, and they do not need to conceal anything from each other.”

“A lot of things change when you marry and have children. There will be some difficulties but swallow your pride. Never worry about your family. They will understand.”

“Oh my God! The husband is a very hardworking and good man, and your wife is also excellent and considerate. I am so moved…!”

“My eyes are full of tears after reading this. I envy you for having a wife and parents who understand your hard work.”

A good family that stays together and supports each other through good and bad times is really the best gift in the world!

Playful Corgi Dog Scares His Owner as He is Found Lying...