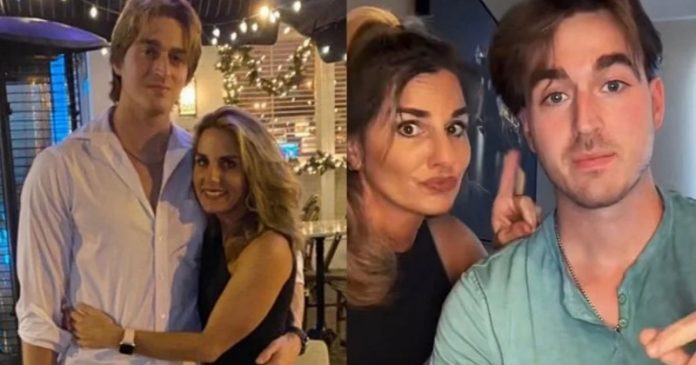 A 48-year-old woman has 2 sons, aged 22 and 19. When her 26-year marriage ended in divorce, she started using a dating app where she met a man 23 years younger than she. The 2 fell in love through messages on the app and claim that they have found their soulmate.

48-year-old Rachel Allen from Texas, USA, started using an app to meet someone after her divorce. She met Alex Michael, a 25-year-old man from New York.

Rachel said: “I joined a dating app after my divorce. I was looking to get back on the scene and have some fun, although I didn’t realize that I would need to change the age markers. I started to feel discouraged by the app. It was trashy, and I wasn’t into it. But then I saw the message I had received from Alex, and he’d actually messaged me in a nice manner. I kept going back to his profile, but I couldn’t see his age. Although he looked younger than me. But there was just something about him. We started talking every day, and we hit it off immediately. Things progressed with us and we went on lots of trips, so I asked Alex, who is from New York, to come and live with me in Texas.”

“Alex and I are often told we look alike, and we’re regularly mistaken to be mother and son,” she said. “When we walked into a gym together for the first time, the man on the front desk shouted ‘mother and son. I can definitely see it’ to us. But I think he started to get the idea after we started walking in together holding hands.”

Additionally, there was a tiny misunderstanding that made the couple laugh when a woman told Rachel: “And on another occasion, a lady told me I had raised him right. We just laugh it off.”

Rachel recalled that she was shocked when she learned that Alex was only 23 years old and she was 46 years old. Though after 2 weeks of chatting through the dating app, they eventually got along well, and Rachel decided to go to New York and meet Alex personally for the first time.

“I had no expectations for the trip and just thought he could show me around,” she said. “He was also keen to meet up with me, too, and we discovered we had an even greater connection in person. We continued talking and meeting up. Then we visited other places such as Miami. Eventually, I asked Alex if he wanted to move to Texas and live with me. He got a remote job, and everything fell into place.”

Alex Michael admits that he had never associated with women older than he is. “Being in a relationship with an older woman has been great,” Alex said. “I’d never been with anyone older than me before, but Rachel has helped me mature and improved my morals and values. I don’t have a fetish for older women or anything like that. We know it’s different, but Rachel looks amazing, and she is young at heart. It just works between us.”

Rachel’s relationship with Alex Michael has not been a comfortable situation. Meeting his family built some tension between the couple. “Alex’s family is especially not happy about our relationship,” Rachel admits. “I have two sons. They’re 22 and 19. My youngest has been the most open and embraced it more, and I have had more push back from my eldest, however, he is always respectful.”

Visiting various places was not enjoyable for the couple, especially when they receive rude stares from people. “We get stares and pointed at when we are out and about together, and it’s mainly from women,” Rachel says. “I have even had people yell ‘cougar’ at me. But our relationship is so special, neither of us would ever want to walk away.”

The couple has been dating for a year and chose to live in Austin, Texas. They also have planned their lives together. Rachel happily said, “We have talked about our future, marriage, and kids. Biologically, I wouldn’t be able to have any more kids, so if we decided we wanted to start a family together in the future, it would have to be another way. Perhaps adoptions or surrogacy. But we are in a serious, committed relationship and just taking each day as it comes. We are both so happy.”

Believe, and the relationship will be strong. Endure, and all hardships will pass. Accept, and the bond will never be broken. Age never matters, LOVE matters.

Parents Beware: Be Firm in Handling Your Kids When They Throw...