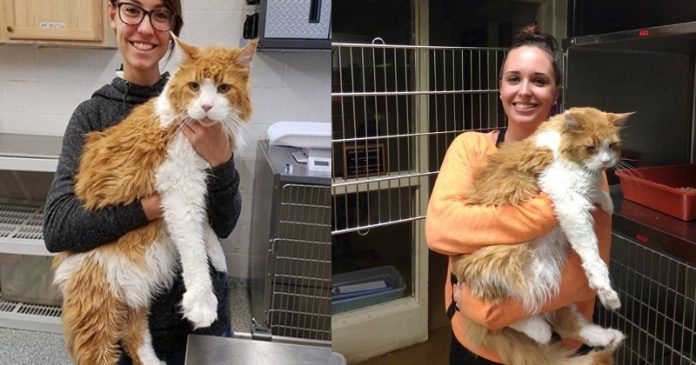 He weighed 21 pounds when he arrived at the shelter! Everyone was amazed at how big the cat was that they immediately shared his photos online, in hopes to find him a new loving home.

21-pound Edgar the cat arrived at the Humane Society of Carroll County in Maryland, and the staff was shocked at how huge he was. Edgar’s former owner left him at the shelter because the cat could not get along with his grandchildren.

At 21-pounds, this 9-year-old cat is much larger and weighs heavier than an average cat. However, he is not as large as Samson, who was named as the largest domestic cat in New York City.

The staff at the shelter called Edgar, The Gentle Giant, for he was very calm and patient when they were still processing him into the center.

“Edgar was so sweet coming into the shelter and handled his intake process with shining stars,” Michelle Fidler, director of animal care at the Humane Society of Carroll County, told The Dodo.

Since Edgar was undoubtedly large, Fidler decided to share his picture on the shelter’s Facebook page and was shocked at how many reviews and comments they received on his photo.

Edgar, the giant cat instantly became an internet sensation, and requests for adoption bombarded the shelter, and it came at an overwhelming rate. A local woman and her boyfriend heard about Edgar, and they immediately went to the shelter to make Edgar a part of their family, too.

“As soon as I saw his picture, I was in awe,” Jenna Schwartz, Edgar’s new mom, told The Dodo. “I’ve never seen a cat that big before, he really catches your eye. He’s gorgeous!”

Edgar loves his new home now, together with his other rescue siblings, a cat named Loki and a Chihuahua named Thor. They get along fine and loving him as much as his new parents do.

“Edgar’s situation is what we hope for every animal entering the shelter,” Fidler said. “He was brought to us, received his intake process and was adopted all within the matter of a few hours. We couldn’t ask for anything better than that.”

Family was trapped in a burning home until their German Shepherd...