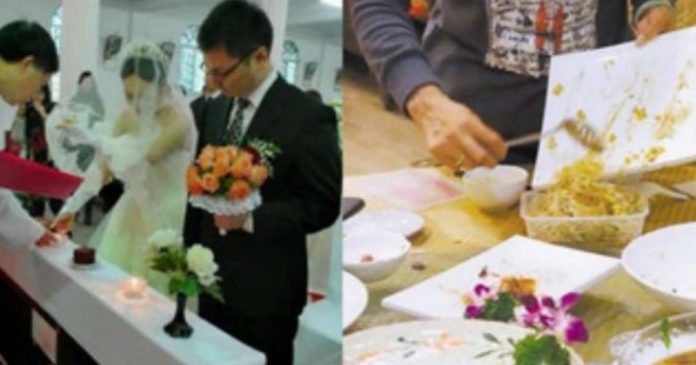 Packing leftover food into ‘take-home’ bags when attending an event may be embarrassing to some people who find them unethical. Nowadays, it has become one of the norms in parties. For most people, food should not be wasted since there are other people everywhere who are still struggling just to get a bite.

A woman and her husband were childhood sweethearts. At the time, the woman’s family lived in hardships, struggling to have food at their table. Although their life was bittersweet, they were happy. Their situation did not destroy the woman’s determination to finish her studies. Luckily, her hard work paid off. Both she and her husband were accepted into a university.

After they graduated from college, they both expressed their intent to marry. The parents of the couple agreed and were immediately busy with preparations for the engagement event. Invited guests lent a helping hand, and the couple was the happiest people then.

On the day of the engagement, after everyone was done with their meal, the father-in-law packed up the leftovers in paper bags. The woman noticed his actions which immediately annoyed her. Losing her decorum, she shouted at her father-in-law, calling him names such as street beggar and a shameless man.

Her husband realized what was happening and did not take immediate action. Instead, he said in a calm voice: “If there is something that needs to be discussed, we can discuss it at home.” The wife, assuming that the husband was taking his father’s side, slapped him and did not let him speak. Relatives and friends present at the event were stunned and disappointed by her behavior, prompting them to scold her.

The embarrassed father-in-law did not say a word. He just bowed and continued to pack up the leftover food. The bride stormed out of the banquet hall very angry. The husband followed her, apologizing and coaxing her to calm down. “No matter how angry you are, we talk about this at home.”

Unable to calm down, the woman replied to her husband: “Don’t you think it’s embarrassing to take the leftover food in front of so many people? He looks like a street beggar!” The calm husband replied, “My father is getting old. He doesn’t want to see any food left, he thinks it’s too wasteful.”

When the couple arrived at the groom’s home, what the bride witnessed left her dumbfounded. Her father-in-law has adopted several orphans with no homes. He brought the leftover food for them!

Now that the bride understood what was happening, she still could not find it in her heart to forgive his embarrassing actions at the engagement event. The husband agrees that she was only exaggerating. It’s only the pride of the woman that is getting in the way of forgiveness.

“Do you think I’m wrong? In front of so many people, are you going to pack the leftover food?” The bride asks. What do you think?