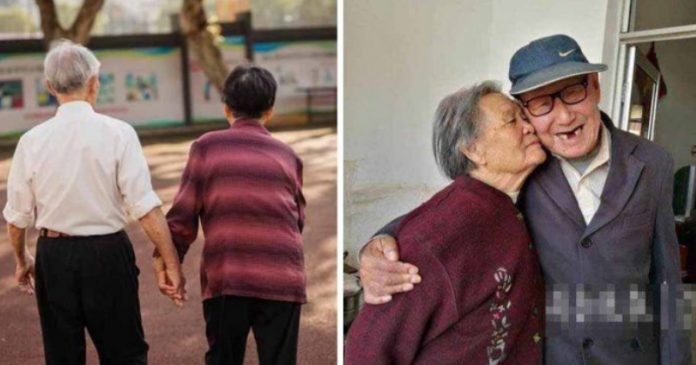 On October 30, on the 4th floor of an old apartment, 93-year-old Yin Chenghou went into the first room while humming, then suddenly called, “Erni, I’m coming!” He hugged 87-year-old Yin Xumei, and the couple laughed like teenagers. They were childhood sweethearts who reunited after 60 years apart. They both live in Xintai Senior Apartment, where the two rekindled their love for more than 10 years to date.

Their love for each other began more than 70 years ago, though their parents strongly opposed their love affair. “His name is Yin Chenghou, and my nickname is Erni. We still call each other our old names,” Yin Xumei said with a smile.

When they were children, Chenghou and Erni lived in Liuguanzhuang Village, Xintai County, Shandong Province, China. They always played together and joined an amateur theater group in their village. Erni sang while Chenghou played the erhu, a two-stringed bowed musical instrument called a spike fiddle. Wherever they went, they walked hand-in-hand.

In those days, young people who planned to marry were required to go through a matchmaker hired by their parents. Chenghou told his parents that he wanted to marry Erni. Since both their family names were Yin, and Erni was still very young, their match was opposed by the elders of their family. Chenghou encouraged his uncle to admit his feelings for Erni to her father. In return, Erni’s father was enraged. He scolded both of them and no longer allowed Erni to go out of the house.

Chenghou and Erni lost contact, and the family had arranged a wife for Chenghou. He enlisted in the army while still in a fit of anger due to the incident. Many battles have passed, and Chenghou was assigned to Anhui. By then, Erni has come of age and married someone else.

“At that time, to get married, you had to listen to your parents, as well as the opinion of the whole family. So Erni and I haven’t had contact with each other for 60 years,” said Chenghou. “My wife is an old woman with small feet, so she didn’t go to Anhui with me. Then my wife got sick, and there was no one to take care of her, so I came back to Xintai from Anhui to take care of her.” Chenghou took care of his wife until she passed away in her 80s.

“When I got old, I still had Erni in my heart. At that time, I just wanted to see if she was okay. Once, I was playing mahjong with an old man in an old apartment, and I asked him if he knew Erni. I think he used to work with Erni,” Chenghou said. “I didn’t think much of it at the time. I just wanted to see her and see if she was okay. If she is in trouble, I will even give her $300. I want to help her.”

Later, through investigations done by Chenghou’s acquaintances, he discovered that Yin Xumei was now living in the Zhangzhuang Mine. To locate her, Chenghou went to the mines. He was unsuccessful twice and finally met her on the third try. It was the first and last time he saw Yin Xumei. When they said goodbye, they were dumbfounded. Holding hands, Chenghou and Erni did not want to let go.

Yin Xumei recalled: “I was 77 years old at that time. My husband had died, and I was alone. On that day, Chenghou came to me. When I came out and saw him, I was shocked. He asked if I recognized him when I met him. I really couldn’t recognize him at the time. He said he was also from Liuguanzhuang Village, and then he said his name. After I heard it, my brain buzzed like it was about to explode. I still remember him! I remember that day: April 13, 2007.”

Since both their partners already passed away, Yin Xumei and Yin Chenghou decided to rekindle the flames for each other again. They lived together for ten years now.

At the time, Chenghou’s children did not understand their love for each other and tried to separate both of them for several months. Convinced that no one could separate them anymore, they reunited and lived together. The elderly couple overcame all difficulties. They now live in an old senior apartment, happily enjoying each other’s love and companionship.

“I hope that I can walk side-by-side with Erni, otherwise, I will not be able to stand on my own.” Yin Chenghou said. For the sake of their children, the two had written a ‘Will’. Now they live together, and after their death, properties will be passed on to them. “I just want my children to know that I didn’t follow him for the money. I offered to take care of Chenghou,” Yin Xumei said.

“The relationship between these two parents is very good. I often see these two old people walking hand in hand. They are very affectionate and sweet, which is truly enviable,” said Zhao Hong, health director of Xintai City Senior Apartment.

The elderly couple was known as the ‘star couple’ in their apartment building. At advanced ages, they can still perform their literary and artistic talents from when they were young. At festivals and events, the two would perform on stage for the other parents in the courtyard.

Even though they live in an apartment for senior citizens, they both cook their own meals and didn’t hire a house helper. Every day, the couple would take good care of each other. Erni cooks for Chenghou, washes his feet and cuts his nails. In the morning, after breakfast, Chenghou would go for a walk and play cards. Erni would bring water for Chenghou and a coat whenever the weather was cold. If Chenghou didn’t come home for dinner, Erni would go and find him and then have dinner together.

“I used to have pain all over my body. Since I had Erni, all my ailments have been cured. Thanks to Erni for taking care of me,” Yin Chenghou said, in high spirits.

When a reporter asked to take their photo, the elderly couple looked at each other and smiled, worried they would not look good in the pictures. Although in the end, they settled for their current clothing, and Yin Xumei also helped Yin Chenghou change his hat.

Please share this heartwarming and inspiring story with your friends and family on your social media.

A 60-year-old Woman with 8 Grandchildren and has Body Fat of...